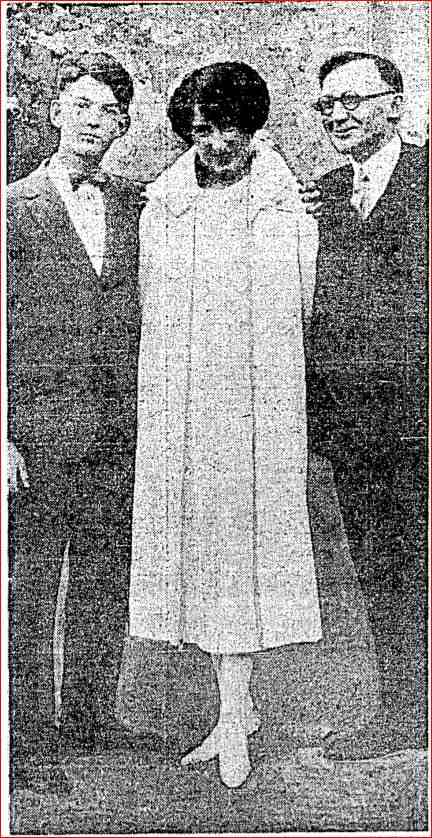 Thomas Young, named after his father, was born on December 21, 1877. Thomas was the second of four children — he had an older brother, Alexander, and two younger sisters.

The Young’s were well respected in their Franklin, Pennsylvania neighborhood and there did not appear to be any issues with the children while growing up. Why did two brothers, with a seemingly normal upbringing, become criminals?

Alexander was the first of the brothers to take a turn toward the dark side.  He died in a bizarre murder suicide on his honeymoon in Washington, Pennsylvania on July 8, 1903.  He had been serving as pastor of the Presbyterian church in Edgemont, South Dakota when he met a local school teacher, Grace Dunlap. They began a relationship and became engaged to be married.

Grace left her home on July 1, 1903 for the city of Lincoln where she was supposed to have her eyes treated for an unspecified condition.  Instead she traveled nearly two thousand miles to Pittsburgh, Pennsylvania were she and Alexander were married. The couple left immediately after the ceremony for nearby Washington, Pennsylvania and checked into a hotel.  Visitors and members of the hotel staff heard a commotion in the Young’s room during the night but did not investigate.

The next morning, when Alexander and Grace failed to appear as expected, staff opened the door to their room and found them dead. Grace lay on the bed.  She had been shot twice through the heart.  Alexander was sprawled out on the floor.  He had been shot in the heart.  His hands were thrown over his head and in one of them he clutched a .32-caliber revolver.  According to a newspaper account, Alexander was “a rascal in the fullest sense of the term.”  He had “played crooked in a financial way in places where he was employed before going to Edgemont, South Dakota.” It seemed that Alexander had been married previously but he didn’t end it honorably. He had abandoned his wife and infant son, never bothering to obtain a divorce.

Within a year following Alexander’s death, Thomas began to experience visitations from his elder brother.  Thomas would later describe the visits:

“I would see my brother’s vision just as I dropped off to sleep.  It always appeared in a large hall.  And I was always in the back of the hall and he was always up in the right corner.  I could tell it was my brother by his form.”

Alexander’s visits coincided with what Thomas thought of as his “murder complex,” a self-diagnosed condition he’d had since he was a child. The so-called murder complex was Thomas’ overwhelming desire to kill anyone who wronged him.

Throughout his life he felt that he was a loser, always picked on and beaten. The murder complex provided him with a vision of revenge and victory over his perceived tormentors.

Thomas wasn’t frightened by his brother’s visits, but they were unsettling. Alexander seemed to be trying to speak, but he either failed, or he spoke so softly that Thomas couldn’t hear him. Could he have been trying to warn Thomas about the murder complex, or was he encouraging it?

In 1910, Thomas, driven by Alexander’s unrelenting visitations, left Pittsburgh to practice dentistry in New Castle, and subsequently in Ambridge and then in Washington, Pennsylvania before leaving for New Mexico and then Texas. He moved from city to city, Alexander always in his dreams, in restless pursuit of something he could neither articulate, nor outrun.

Thomas married twice before finally settling in Los Angeles — where he met Grace.

Grace and her son Patrick were living in an apartment in the Alvarado. The building was one of many built by her late husband.

People who knew of Thomas’ interest in Grace were a little surprised by Thomas’ audacity in courting a woman who was clearly out of his league. She was beautiful. Thomas was average. He wasn’t a large man His hair was receding and he peered out from behind round glasses frames that perched his rather bulbous nose. Despite his physical shortcomings, Thomas made a good impression.  He wasn’t devoid of charm and he always dressed extremely well.

Even if he had only a slender chance, Thomas dedicated himself to winning Grace’s love.  He wasn’t well off, but he put up a good front. He rented a suite of offices in a plush downtown building, hoping to impress Grace, who had a fortune at her command, with his successful dental practice.  He obviously put on a convincing show.  The couple didn’t court for long before they were married.

When did Thomas’ façade of successful dentist and loving husband develop deep fissures?  At what point did Grace realize that the man she had married wasn’t who or what she thought he was?