This is the second of a series on California’s unique women’s prison, which has bestirred national interest among sociologists and penologists. An International News Service staff correspondent was enable to obtain the first comprehensive “inside story” of the institution where Clara Phillips and other noted women offenders are now confined. 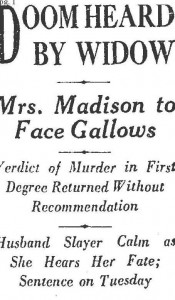 Possibly the sound of six shots, ringing out in the still of night–six shots which ended the life of Eric B. Madison, movie studio cashier.

Eight months in which to hear over and over again, the voice of a judge saying “You are sentenced to hang by the neck until dead”.

That is the fate of Nellie B. Madison, comely widow, who is the only woman in California now under sentence to die on the gallows.

Just eight months ago last March 12, Nellie B. Madison entered Tehachapi prison and was placed in the “death cell.”

This “cell” is merely a room in the prison hospital. Architects who designed the state institution for woman at Techachapi omitted “death cell.” That’s another way this prison is different.

So, in this room on the second floor of the administration building, Nellie Madison sits day after day. She seems a quite different person from the Nellie Madison who amazed Los Angeles court attaches during her trial with her cool calm demeanor.

Her nattily tailored clothes are of course discarded for the regulation prison costume–blue denim dresses with a white pin stripe.

Her jet black hair, now greying, has grown from the trim modern bob until it almost reaches her shoulders.

“In Los Angeles, I was thoroughly benumbed by all that had happened,”she said after the first glad welcome of seeing someone whom she had seen in the outside world. 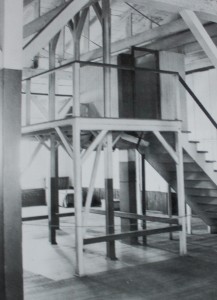 “I couldn’t realized just what had happened to me, but now that I have been here–let’s see is it only eight months or is it ten years–well, I’ve begun to get all the confidence in the world that the State Supreme court will reverse my conviction.”

This was Mrs. Madison’s only interview since she has entered the state institution.

“It seems to me that one’s conscience would be the greatest punishment in the world,” she said.

“My conscience doesn’t bother me one bit, but I do feel the disgrace that I have brought on myself and my family. One’s past good name and character seem to mean nothing when a person gets into trouble, but it apparently doesn’t mean a thing.”

Mrs. Madison’s recreation consists of short walks on the grounds each day–in company with a matron and the letters she receives from friends.

NEXT TIME: In the third article of this series tomorrow, Miss Underwood tells of talks with other inmates, in this unique “City of Forgotten Women.”

NOTE: After this series wraps up I’ll delve into the cases of a few of the women mentioned by Aggie in her articles.