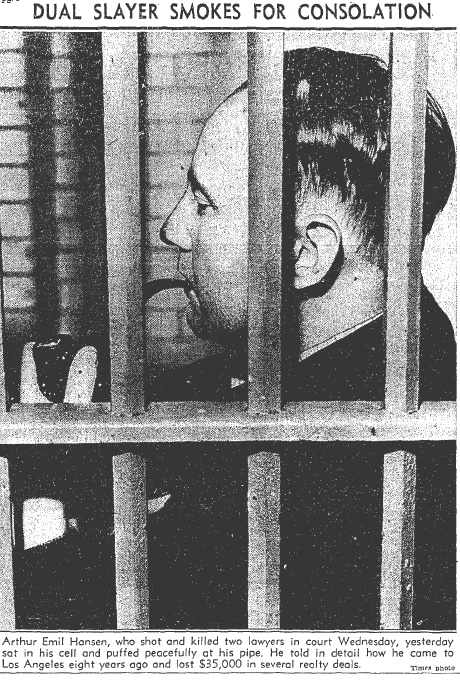 On June 22, 1938, Arthur Emil Hansen emptied his pistol into attorneys J. Irving Hancock and Richard D. McLaughlin in a Hall of Records courtroom and then he attempted to flee. He had taken only a few steps before he was grabbed by Sheriff’s Deputies and held incommunicado. Under questioning by Chief Criminal Deputy Bright he explained why he had whipped out a pistol and shot his two adversaries to death in such a cold-blooded way.

Bright: Now, Mr. Hansen, tell us exactly what happened from start to finish.
Hansen: Well, there was a hearing in that courtroom on a suit I was involved in. I walked into the courtroom and sat in the last row.
Bright: What did you do then?
Hansen: I just sat thee. Suddenly I saw those two attorneys seated in the front row–or maybe in the second row. There nudging each other and smirking at me.
Bright: Did you say anything to them?
Hansen: No, but when they started to whisper, that was the end.
Bright: Did you walk up by them then?
Hansen: No, I just sat there for a couple of minutes.
Bright: Then what did you do?
Hansen: Well, I don’t know whether I stood up or not, but I drew the gun and took direct aim at Hancock’s head, and fired.
Bright: Did you shoot him in the back?
Hansen: I don’t know–I think I did.
Bright: Then what did you do?
Hansen: then I looked at McLaughlin, and he started to rise.
Bright: Did he run?
Hansen: I don’t think so–I fired and he fell to the floor.
Bright: Before you shot McLaughlin, did you reload the gun?
Hansen: No–I just shot all that was in it.
Bright:Was McLaughlin seated when you fired?
Hansen: No, he just started to get up and run when I fired.
Bright: Did you say anything to the two men?
Hansen: No, nothing.
Bright: How many times did you fire the gun?
Hansen: I don’t know–all that was in it.
Bright: When did you buy the gun?
Hansen: Abpout two months ago, in a Main Street pawnshop.
Bright: did you load it then?
Hansen: No, I didn’t load until several days ago–that was when I received some threatening phone calls.
Bright: Do you know who made the threats?
Hansen: Well, I couldn’t recognize their voices, but I think it was those men who swindled me.
Bright: Why did you buy the gun?
Hansen: It was to protect myself from those phone threats

Bright then began to question Hansen about the lawsuit that was the reason for the court case:

Bright: What was this suit about?
Hansen: Well, I used to own the Chatham Apartments on Berendo Street. I traded it for a ranch in Imperial Valley, but I never even got possession of the ranch. By trick and device they made me sign a trust deed, then they foreclosed on me–I lost the apartments, and the ranch too. If they hadn’t tried to take everything away from me things wouldn’t have
happened like they did.
Bright: When did you sew that holster in your coat?
Hansen: When I bought the gun–I was too poor to buy a holster.
Bright: Who told you to do it? did you learn it from someone else?
Hansen: No, I just thought it up out of my head.

Hansen was indicted for the double homicide and he entered a plea of not guilty by reason of insanity. When his trial began in late August Dr. Boehme, the psychiatrist who had declared Hansen “excitable” finally determined that, in his opinion, the shooter was legally sane at the time of the murders. It would be up to the jury to decide if they concurred. 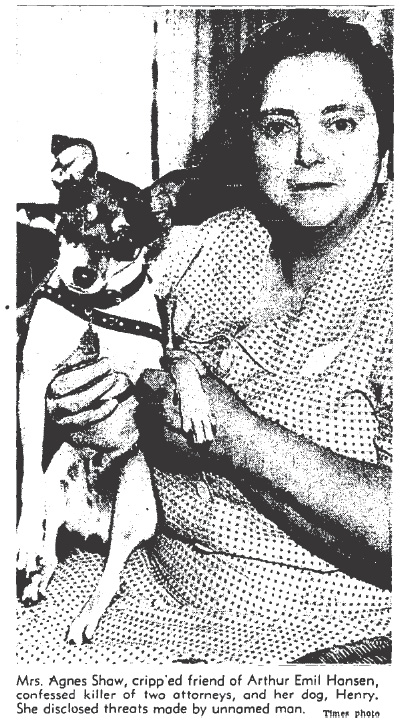 Hansen had dreamed up the improvised sewn-in holster, but apparently he hadn’t concocted the phone threats against him. Mrs. Agnes Shaw rented a room in the same building on Bonnie Brae Avenue as Hansen and they had been friends for several years. Shaw testified that she had been threatened prior to the civil suit:

“I was exercising my dog Henry in the alley in the rear of the apartment during the litigation involving Hansen when a car jerked to a stop beside me. The driver, whom I recognized, even though he attempted to hide his face spoke rapidly. ‘When you go into court I don’t want any of your lying. If you do I’m going to have someone there who’ll fix you and fix you right.'”

There were two men in the car, the one who spoke and another man who had pulled his hat low over his face obscuring him from view.

Shaw recognized the threatening voice in a court session soon after the incident, but when she shared what she’d learned with Hansen he advised her not to disclose the warning because no one would believe her.

Had Shaw been threatened by one of the lawyers opposing Hansen? It would seem so, but there was no evidence apart from Agnes’ testimony–and with McLaughlin and Hancock dead there was simply no way to get to the truth.

Agnes wasn’t a disinterested third party–she had a stake in the outcome of Hansen’s civil case. She was a fairly recent widow living on an $18 per month relief allowance, but she had hoped to recover the $1000 her husband had loaned to Hansen to make the Imperial Valley land deal. 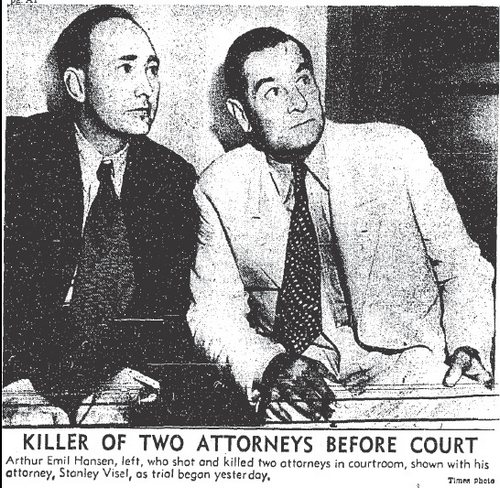 In court Hansen frequently broke down as he described the events that led him to murder the two lawyers. His hands spasmodically clenched and unclenched as he recited a tale of indignities which he said climaxed when one of the attorneys he subsequently shot spat in his face.

“I pleaded with Hancock not to take everything I had. He said, ‘You know what I think of you, don’t you?’ and then he spit on this cheek right here.”

Hansen pointed a finger to the side of his face down which the tears were streaming and said:

“He (Hancock) said ‘the county will give you a bowl of soup if you need it.”

It was shortly after that exchange that Hansen pulled out his concealed pistol and fired at Hancock and McLaughlin until it clicked impotently–all rounds spent.

I’m inclined to believe Hansen’s story about his unpleasant hallway exchange with the attorneys. I also believe Agnes’ testimony about the threat in the alley. It seems to me that the big city attorneys had facilitated the ruination of the South Dakota farmer; but even if that was the case Hansen had no right to murder his tormentors.

Maybe the case would have gone differently if only Hansen had shown the slightest bit of remorse, but instead of saying he was sorry he blamed the dead men for their fates and declared that he was glad they were gone.

A jury of six men and six women deliberated for one and one-half hours before finding Hansen sane at the time he shot the attorneys and he was found guilty of the double homicide.  Judge Arthur Crum was sentenced to serve from two to twenty years in San Quentin.

NEXT TIME: Let’s Kill All the Lawyers, Redux

2 thoughts on “Let’s Kill All the Lawyers, Part 2”