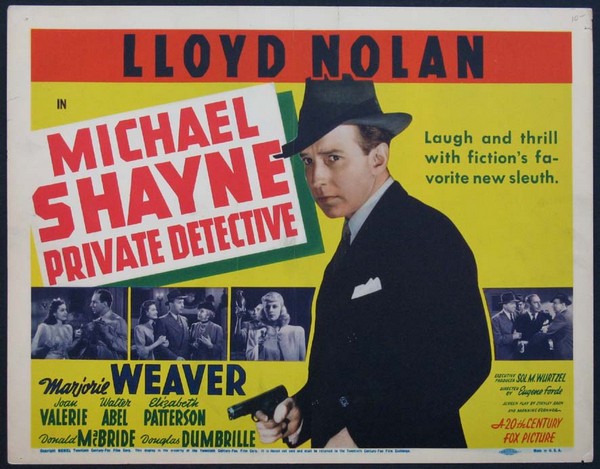 Welcome! The lobby of the Deranged L.A. Crimes theater is open for a Sunday matinee. Your faithful proprietor was otherwise engaged this past Friday night at ’53 Fest at the Los Angeles Police Museum! The special event featured James Ellroy and Glynn Martin reading from the museum’s new book “LAPD 53”.  Also on the bill was Nathan Marsak, architectural historian and all around swell guy. Nathan introduced and discussed a film from the museum’s archives, narrated by none other than Chief William H. Parker, about the Police Administration Building which would later bear his name. Yours truly introduced and discussed a crime scene walk-through film on the “Croquet Mallet Murder”, also from the archives. The film was originally shown to jurors at the trial of Edward Richard Fredericks–the case is featured in “LAPD ’53”.

Now it’s time to grab a bucket of popcorn, some Milk Duds and a Coke and find a seat. Today’s feature is MICHAEL SHAYNE, PRIVATE DETECTIVE based on the novels by Brett Halliday. The film was directed by Eugene Forde and starred Lloyd Nolan, Marjorie Weaver, Joan Valerie and Elizabeth Patterson.

As the movie poster suggested: “Laugh and thrill with fiction’s favorite new sleuth.”

Hiram Brighton, the racing commissioner, hires detective Michael Shayne to watch his daughter Phyllis, a compulsive gambler, while he is away in New York. Shayne is also offered a job by Larry Kincaid to collect money from Harry Grange, a gambling racketeer who welched on a bet, but Shayne declines his offer. Soon afterward, Shayne comes face to face with Grange when he finds him feeding Phyllis money to play the roulette wheel.