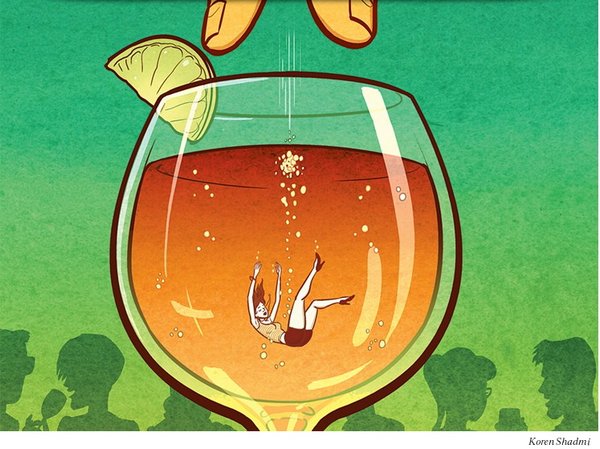 Illustration by Koren Shadmi originally posted to the L.A. WEEKLY on WEDNESDAY, NOVEMBER 16, 2016.

Stefan was the first of the Spitzer twins to get into trouble with the law–at least in the U.S. In 1980 he picked up a woman identified only as Terry B.  Stefan said he was a French actor and told Terry she should be a model. Later that day Stefan forced himself into Terry’s apartment where he choked and raped her. He controlled her by telling her that he had killed before, in Israel.  He was subsequently arrested, tried and acquitted for the attack on Terry.

In 1982 Stefan met Marci G.  They dated one time without incident.  On their second date the man Marci knew as Julian seemed different and, strangely, couldn’t recall details of their initial meeting or their first date.  The man took Marci to his apartment where he sodomized and raped her until she bled, all the while threatening her with a fist to her face.  Marci ID’d her attacker as George Spitzer.  George was tried and acquitted.

Keri B met Stefan in 1983.  Keri and Stefan had consensual sex, and then he left her for about an hour.  When he returned Keri thought he seemed different.  He was wearing the same clothes but they didn’t fit—the shirt sleeves and pants were too short.  Another detail that alarmed Keri was that earlier he had been a sweet and sensual kisser.  When he returned he was rough and he slobbered.  Keri figured out that she’d been duped by the twins.  She called them later and left voice message–she told them what they had done was disgusting.

In 1986 Trisha G was working in a hotel restaurant when the twins stopped in for cocktails. Trisha went to Stefan’s suite for champagne and pizza. She became sleepy and passed out. When she woke she was in bed, Stefan was strangling her with one hand and groping her with the other. She managed to scratch his face. She got away. Trisha reported the incident to the police but George visited her regularly at her job and threatened her. Trisha lost her job and had to move away because she feared the twins were members of the Mafia.

In January 1989, Jennifer P met George at a mall shoe store where she worked.  She had wine with George at a café and then he took her home where they had consensual sex.  Afterward, he raped her while she begged him to stop. When George was finished, Stefan came in.  Jennifer could tell the difference and said so.  It didn’t matter to the twins.  Stefan raped her and then forced oral copulation.  Jennifer reported the twins to the police.

George was questioned by the cops.  He said that Jennifer manufactured the story to get revenge on him on him because he had refused to buy her dinner.  The district attorney declined to prosecute.

George met Valerie O at a Beverly Hills nightclub.  He said he needed to stop by his apartment to pick up his ATM card.  Once they were inside the apartment George attempted to rape her but Valerie fought him off. The frightened woman watched as George masturbated in front of her and ejaculated into the sink. When Valerie returned to the nightclub later that night her friends saw the scratches on her arms and told her to phone 911.

George was tried, but the trial ended in a hung jury.  He spent one day in jail and was referred to a shrink.

When did George and Stefan realize that Rohypnol, the drug their father took for back pain, could be used to facilitate rape?  It is possible that they read about it or saw it on the news. By the mid-1990s there were articles and investigations into the use of date rape drugs.

Crime: Legislators seek to ban possession of Rohypnol, which is only made for foreign markets.  — Los Angeles Times, June 8, 1996

One thing is certain, the drug was tailor made for bottom feeders like the Spitzers. They could slip the undetectable drug into a woman’s drink and turn her into a zombie sex toy with little or no memory.

NEXT TIME:  How long can the Spitzer’s rape rampage continue?