Aggie’s epiphany to interview David Clark’s parents, following his arrest for the murders of Herbert Spencer and Charles Crawford, was a brilliant blend of feminine intuition and a reporter’s gut instinct. None of her male counterparts had thought of the family angle, and so while Aggie was scoring a front page exclusive the other reporters were busy rushing down blind alleys. 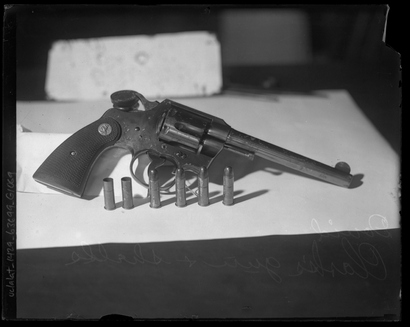 The front page exclusive with Clark’s parents led Aggie to yet another great interview — this one with Herbert Spencer’s widow. A friend of Aggie’s who knew the Spencers arranged the interview.  Aggie was nervous; she was still an inexperienced cub reporter.  She may have lacked experience, but she was also smart and determined. She made a point of reviewing everything that had been reported about the case and poked around to find holes in the coverage. Once she’d mastered the facts, she compiled a list of questions which she took with her to the interview.

Aggie admitted to Mrs. Spencer that she was a cub reporter, and her honesty paid off. Herbert Spencer had been a reporter and a city editor for many years and his widow wouldn’t have been deceived if Aggie had tried to masquerade as a seasoned newshound.

Mrs. Spencer answered Aggie’s questions about Herbert’s background; all the while Aggie was leading up to the hardball questions she knew she’d have to ask to get an interview worth the printer’s ink.

The murders of Spencer and Crawford had revealed to Angelenos some of the corruption in the city’s government. Aggie had no choice but to grill the widow Spencer about Herbert’s possible involvement in bribery, extortion, and shakedowns. Mrs. Spencer defended her husband’s reputation in no uncertain terms. She had loved him and believed in him. She was convinced that he’d had no part in the Combination’s illegal activities.

When Aggie returned to the newsroom she was nervous about writing up the story, but Rod Brink, the city editor, told her to “just write the facts as you’ve told them to me”.

Aggie’s interview with Mrs. Spencer resulted in quotes that made the story resonate with readers who were eager to get the inside scoop.

The widow told Aggie: “I was a newspaperman’s wife for fourteen years, and I loved it.  He’d call and say: ‘I’ll be home late, dear, just had a peach of a murder’.  I never, never thought that his death would turn out to be a peach of a murder”.

Despite her grief Mrs. Spencer expressed sympathy for the shooter’s mother!  The resulting headline was: “Sorry for Dave’s Mother,’ Says Herb Spencer’s Widow”.

Aggie had scored another two-line, eight-column banner at the top of page one!  There was a photo of Mrs. Spencer over the story, with Aggie’s by-line.

Gertrude Price, Aggie’s mentor, was thrilled with the two exclusive interviews that Aggie had scored in what was then the biggest story in L.A.  Price told Aggie: “The best reporters in town, with all their contacts, weren’t able to get that story. It’s an important story, and you got it. You got it exclusively.”

It wouldn’t be the last time that Aggie scooped the competition. It was an auspicious beginning to a stellar career.