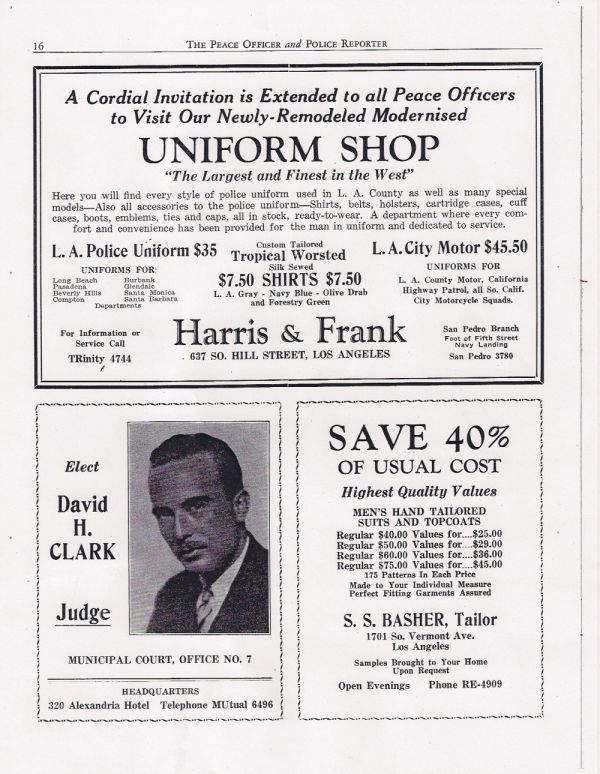 Clark’s bid for municipal judge was interrupted by his arrest for double homicide.

On the stand at his first trial, David Clark said that he’d shot Herbert Spencer and Charles Crawford in self-defense because the men had tried to get him to help them frame his friend Police Chief Steckel. He referred to the two dead men as skunks.

On August 23, 1931 the jury deadlocked and a second trial began on September 22nd.The second trial ended in an acquittal, perhaps in part because there were eight women on “Debonair Dave’s” jury – and he had always appealed to the ladies.  In fact, one of the jurors, Mrs. Florence H.R. Gorham, was very impressed with Clark’s wife Nancy and approached her following the verdict. Gorham told her: “I loved you from the first time I saw you”. 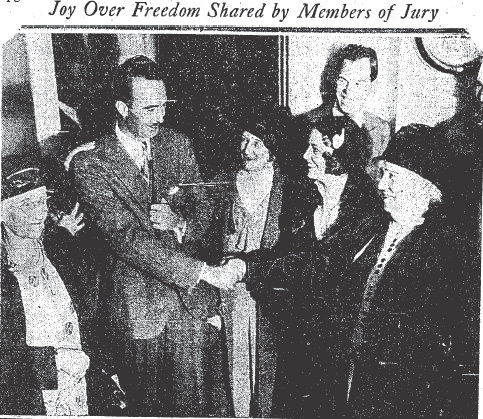 A few of the female jurors from Clark’s trial look adoringly at “Debonair Dave”.

Following the acquittal, Clark left the legal firm he’d been working for and set up his own practice. His primary client was Guy McAffee, a former LAPD vice cop turned racketeer.  Clark was paid well for his association with members of the Combination.  He went on this way for a few years and then, suddenly, in January 1937 he was reported missing – he’d completely vanished. After two months he was located in Nice, France.  He was described by the U.S. Consul as “…insane and without the courage to commit suicide”.  McAfee paid $800 for Clark’s ticket home.

Dave’s wife Nancy divorced him in 1939, and his life spiraled downward for several years. His law practice foundered and for a while he lived in obscurity running a small store near Costa Mesa.

Only a few friends had remained loyal to Clark.  George Blair (a friend from his USC days) and his wife Rose, nicknamed “Toots”, took him in through the summer and fall of 1953.

On Armistice Day, November 11, there was a family party. George was passed out drunk on the sofa.  He was awakened by “a kind of an explosion, like a backfire.”  When he sat up and looked around the room he saw Dave sitting in a chair. George asked “Where’s Toots?”  Dave looked at him and said “I killed her”.

Toots was found in the kitchen, dead of a shotgun blast. She and Clark had been arguing about him “mooching” off the family.

Dave ultimately pled guilty to murder in the second degree and was sentenced to from five years to life. He only served three weeks.   In Chino Prison he suffered a brain hemorrhage and died on February 20, 1954.

NOTE:  For an in-depth look at David Clark and the Spencer-Crawford murder case you should read: A Bright and Guilty Place: Murder, Corruption, and L.A.’s Scandalous Coming of Age by Richard Rayner.

For more on the odious Combination, you may also want to check out John Buntin’s book: L.A. Noir: The Struggle for the Soul of America’s Most Seductive City. TNT has picked up the book for a new series.