On March 15, 1928, the L.A. Times reported that Mrs. Christine Collins’ nine year old son Walter had gone missing five days earlier. Christine said that she feared that her son was the victim of a kidnapping.

Hickman smiles as he reads a transcript describing Marion’s murder.

Angelenos were still reeling from the December 1927 kidnapping and mutilation murder of twelve year old Marion Parker by William Edward Hickman, “The Fox”. In fact Hickman had been convicted of Marion’s kidnapping and murder only weeks prior to Walter Collins’ disappearance. [Hickman would be hanged on October 19, 1928].

Marion was the daughter of Perry Parker, a prominent banker. Christine was a telephone operator and her husband was doing time in Folsom prison, it seemed unlikely that kidnappers would choose Walter to kidnap for ransom. Because there was no money motive the cops were investigating anyone who may have had a beef with the kid’s dad — they figured that revenge could be as powerful a motive as money.

The investigation into ex-cons with a grudge wasn’t productive — although Christine continued to believe that revenge was the only possible reason for Walter having been taken off their quiet Lincoln Heights street.

Of course the police, in addition to rounding up thugs, were combing the Collin’s neighborhood for possible witnesses. Mrs. A. Baker of 219 North Avenue 23 said that she’d seen the Collins boy in an automobile with two “foreign-looking people” and that the boy was pleading to be released.

Other of the Collins’ neighbors said that on several days prior to Walter’s disappearance a
man, who may have been Italian, (another “foreigner”) had been in the neighborhood asking for directions to Walter’s home. According to witnesses, the strange man was accompanied by a woman, but nobody had seen her well enough to provide a description

If the witnesses were to be believed there were mysterious “foreign looking” strangers skulking around Los Angeles; all of them, apparently, up to no good. 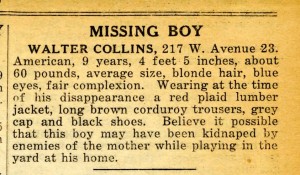 There were so few clues in the kidnapping that the police were frustrated. Sightings of the boy had led to dead ends, and even Walter’s convict father could shed scant light on a motive.

Captain Jones and Lieutenant Hanson interviewed some of Walter Collins’ school chums, and one of the kids, twelve year old Lloyd Tutor, partially identified a mugshot of an ex-con as the man who had asked for directions to the Collins home. But once again the lead didn’t pan out.

Under the command of Captain J.J. Jones, two hundred LAPD officers began a thorough search of the northeastern section of the city. The cops didn’t find a trace of the boy. Walter had been missing for a month. 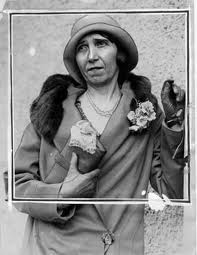 Christine couldn’t afford the luxury of staying at home and aiding in the search for Walter. She had to go to work each day — she was sleep deprived and near the breaking point.

For five agonizing months Christine waited for news of Walter. Finally in early August, Christine was notified that Walter had been found in De Kalb, Illinois. The how and why of Walter’s trek east was hazy at best. It appeared that an ex-con named J.S. Hutchison, who had a record of statutory offenses against boys, may have taken him. Strangely, cops had word that Hutchison was supposedly still incarcerated in San Quentin. Unless Hutchison could be in two places at once there was something hinky about the story.

Illinois authorities put Walter on a train to Los Angeles. Christine was ecstatic at the prospect of being reunited with her son. Mother and son were brought together in Juvenile Hall.  The first words uttered by Christine were:

Perhaps Walter’s time away from home had changed him mentally and physically — but to such an extent that his own mother couldn’t recognize him?  Maybe the cops were right and Walter would return to normal after some time in the company of his loving mother. But what if the cops were wrong?

NEXT TIME:  A faux Walter Collins?