The indictment returned by the Los Angeles County Grand Jury against Clara Bow’s former secretary, Daisy De Voe, totaled 37 counts of grand theft. Not only was it alleged that De Voe had walked off with some of Bow’s jewelry and personal papers, she was also accused of withdrawing approximately $16,000 [equivalent to $222,434.49 current USD] from one of Clara’s accounts. De Voe was arrested and immediately posted a $1000 bond so she wouldn’t have to await her arraignment from behind bars.

De Voe’s attorney, Nathan O. Freedman, filed a complaint on her behalf against Clara Bow, Rex Bell, and three employees of the District Attorney’s office. The complaint asked for $7200 [equivalent to $100,095.52 current USD] damages based on De Voe’s “unlawful detention” for forty-eight hours when she was investigated in connection with missing property said to have belonged to her former employer.

De Voe’s trial began on January 13, 1931, and Daisy’s attorney quickly directed the juror’s attention away from Daisy’s alleged bad behavior by shining a light on Clara’s lifestyle. According to information gleaned from canceled checks, Bow spent over $350,000 [equivalent to $4.8 million current USD] between February 1929 and October 1930 on clothing, automobiles, and going out. Freedman’s diversionary tactics included questioning the actress about payments for whiskey (illegal at the time).

“I authorized Miss De Voe to spend whatever was necessary to maintain the household. I trusted her. If she wanted to buy whiskey, why, I suppose, she made out the checks and signed them.”

“Didn’t you ever look through the books to see what she spent?”

To which Clara replied:

“No, I never looked through the books–that’s why I was so silly–I trusted her.”

Clara was particularly upset when Dep. Dist.-Atty. Clark showed her a canceled check in the amount of $850, and asked asked her if she had knowingly authorized De Voe’s purchase of a fur coat with the money:

“That is my check. I signed it myself. But Miss De Voe brought it to me and said it was to go on my income tax and I signed it because I trusted her.”

Clara broke down in tears when she was asked about an engraved silver dresser set. According to Clara, De Voe had presented the set to her as a birthday gift.

“Did you authorize Miss De Voe to draw a check upon your special account to pay for this set?”

“I never did. I thought she was just being sweet and kind to me, that’s all.”

Clara explained repeatedly under questioning that she had authorized De Voe only to draw checks for her own salary and for household expenses.

At one point Clara leaned forward in the witness box and remarked to De Voe:

“Go ahead and sneer, Daisy, that’s all right.”

Because Daisy had taken many of Clara’s personal papers, including love letters and telegrams, the items were entered into evidence. And of course some of the telegrams, particularly the most personal of them, were read aloud in court. There was a telegram dated September 8, 1930 from Rex Bell to Clara while she was staying at Tahoe, and it read:

“Dearest sweetheart, darling baby, I do miss you, and this is only the beginning. Rex.”

Local newspapers printed as much as they could of Clara’s personal correspondence, which had to have been excruciating for the actress. The papers also printed excerpts from Daisy’s confession to the D.A. — and they spoke volumes about Daisy’s character — or lack thereof. 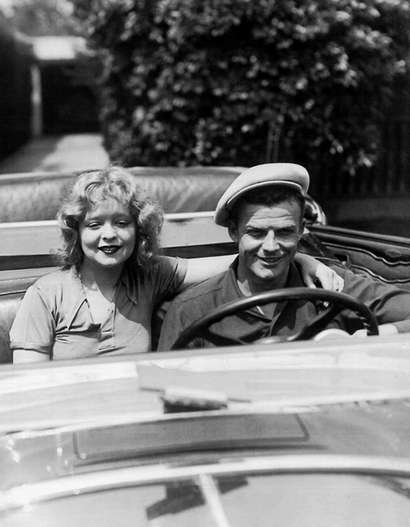 Daisy had come to L.A. in 1923 after graduating from a St. Louis beauty college. She was employed in two beauty parlors before transferring to the Paramount studio where she eventually met Clara Bow. Clara hired Daisy in 1929.

The former hairdresser had taken every opportunity to defame Clara in her confession. When she was asked about the her duties for the star, Daisy said:

“Well, I did plenty.  Her house was terribly dirty.  I had the whole place renovated, the drapes taken down and the rugs taken out and cleaned; floors polished; furniture gone over, and everything; and, well, I don’t know what I did.”

In her confession Daisy said that she overheard a conversation between Clara and Rex Bell, in which Bell said he thought Daisy ought to be fired. When she was asked what she did with that information, she said that she decided to go quietly because:

“I think it would be better to walk out and later on straighten out her affairs. I wanted to get her things settled as quietly as possible, and keep Clara out of the papers, because one more slam in the papers and Clara is through in pictures.”

Was Daisy really trying to help Clara out of a potentially bad situation? No way. Her confession revealed her attempt to extort money from Clara by threatening to use her personal papers to expose her to public ridicule. For her silence, Daisy told the D.A.’s investigators that she’d asked for  $125,000. She said:

“I think it would be to her advantage to keep my mouth shut.”

When she was asked how much money she had drawn out of Clara’s account over and above her salary, Daisy replied that she’d taken $35,000! But in her mind it was all Clara’s fault:

“It was her fault.  If she had paid attention to business I wouldn’t have taken a dime from her because she would have known about everything. She wouldn’t even write her own checks.  She put me in a position to take everything I wanted.  Of course, I didn’t blame her.”

Next Time: The mudslinging continues, and Riverside bans one of Clara Bows films.