Jimmy Reid told the cops that he had been nagged so relentlessly by his girlfriend, Anne Terrell, that he’d snapped and killed her He said that she wouldn’t leave him alone on the subject of bootlegging.  No, she didn’t want him to stop — she wanted him to begin again because they needed the money.

However, once it was revealed that the dead woman’s eleven-year-old daughter, Harriett, had been molested by Reid  the original reason for the murder was abandoned in favor of another far more disturbing and sinister motive.

The doctors proved that eleven-year-old Harriet Terrell had been criminally assaulted, and she was able to name her attacker — her “stepfather”, Jimmy Reid.

“This evidence throws new light on the case and establishes an entirely different
motive for the crime. Mrs. Terrell undoubtedly learned of the relations Reid had
with her daughter and probably threatened him with exposure. This most likely
caused the quarrel which resulted in her death.”

As a motive it made one hell of a lot more sense that a violent argument over
Reid’s refusal to return to bootlegging.

Reid continued to deny harming Harriet, but he related to the Coroner’s jury how
he had killed Ann by cracking her over the head with a gas pipe after she had
kicked him.

“I temporarily went insane.” he said.

As far as his reason for refusing to get back into the bootlegging business, Reid
said he was afraid of being arrested again and he didn’t want to get Harriet into
any trouble. Huh? Unless the kid was helping him to run the booze around town it
seems unlikely that she’d be in any trouble over contraband liqour. 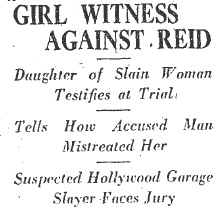 The D.A.’s office filed a complaint against Jimmy Reid for two counts of mistreating Harriet — once prior to the murder, and one time afterwards. Harriet was required to face Reid in court. It must have been traumatizing for the little girl; and if that wasn’t awful enough, in an utterly nauseating display during the court proceedings Reid leaped from his chair and fell to his knees in front of Harriet sobbing that he did not kill her mother. He had to be forcibly returned to his chair by the bailiff.

In spite of his confession to the cops in which he had recounted details of Anne’s murder, Jimmy later testified that another man beaten Terrell to death. He admitted, however, that he had buried the body.

The spectacle of Reid prostrating himself in front of Harriet claiming to be innocent of her mother’s murder was revolting, but his encore was even more despicable. When he appeared for sentencing in Anne’s slaying he brought with him a sheaf of papers which he dropped on the clerk’s desk. The papers were sentimental poems in which the thirty-nine-year-old Reid professed his love for eleven-year-old Harriet.

Here is a sample of Reid’s verse:

“Oh God upon high, won’t you please hear my cry
And show me the way to come home?
Don’t pass me by, I am ready to die,
I’m deserted and left all alone.

Jimmy Reid was convicted of having murdered Anne so that he could run off with Harriet, and he was sentenced to life. The judge recommended that he never be paroled. I think he should have received the death sentence for his crappy poem.

James Reid vanished from the news until September 1946 when he escaped from a prison road camp near Quincy, Plumas County. Warden Duffy of San Quentin said Reid had been sent to the road camp because he had a record of good behavior. In fact he would soon have been eligible parole.

I don’t know if Reid was returned to prison or if he remained on the lam. There were no further reports on him (at least none that I could find) in the newspapers.

10 thoughts on “The Body In The Garage, Conclusion”