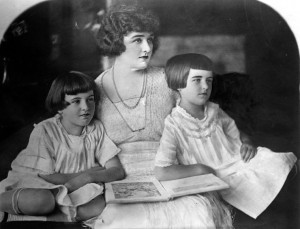 On December 15, 1927, twelve year old school girl Marion Parker was unwittingly handed over to a monster by the school registrar at Mt. Vernon Junior High School. Her abductor had come to the school that day and said that Perry Parker, the girl’s father, had been seriously injured in an automobile accident and was calling for his youngest daughter.  But Marion was a twin – which girl was the man talking about? Both Marion and her sister Marjorie were at school that day.

It was determined that Marion would be brought to the office for the simple reason that she was in class and Marjorie was on an errand on the school grounds, and so she was not immediately available. Marjorie was returning to the school office just as Marion was getting into a car with a dark haired stranger. Marjorie watched her sister and the man drive away. 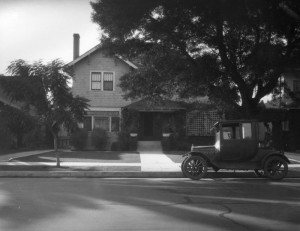 The Parker family waited in agony for Marion’s return, or at the very least for a communication from her kidnapper. They didn’t have long to wait. The day following Marion’s abduction the first of four ransom letters was received. The kidnapper demanded $1500 in cash for the girl’s release with the threat of death if the demand was not met. The first of the ransom notes was signed “George Fox”, the last of them were signed “The Fox”.

On the morning of December 17, 1927, Perry Parker received a telegram reiterating the earlier demand for $1500 in exchange for his daughter’s life. That evening Parker took a call from the kidnapper.  The man instructed Parker to drive to the corner of Fifth Street and Manhattan Place in Los Angeles, and told him not to inform the cops or Marion would die. The plan was for Parker to sit in his car and wait for the kidnapper to pull up next to him and show him that Marion was alive. The kidnapper would then collect the ransom money and drop Marion off a block down the street. 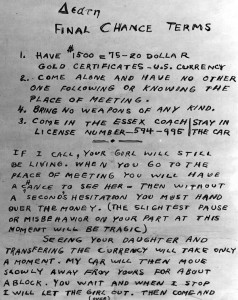 Instructions from “The Fox”.  Photo is courtesy of LAPL.

Parker followed the kidnapper’s instructions to the letter. He waited briefly at the designated meeting place for a few minutes before a Chrysler coupe pulled up beside him. He looked over and caught a glimpse of Marion sitting in the front seat. Parker sensed that something was wrong with the girl — maybe she was bound or drugged. Nothing could have prepared Mr. Parker for the reality.

The driver of the Chrysler had a white handkerchief over his face and pointed a large caliber weapon at Parker. The man said: “You know what I’m here for.  Here’s your child. She’s asleep. Give me the money and follow instructions.”  Parker did as he was told. He was too close to getting his little girl back to make any move that would spook the man with the gun. The money was exchanged and Parker followed the coupe to 432 South Manhattan Place. The passenger door of the car opened and Marion was pushed out onto the lawn.  Parker tried to get the license number of the car, but the kidnapper had bent the plate so that only a few numbers were visible.

The Chrysler roared off and Parker ran over to Marion. He felt a few moments of relief, his girl was going to go home with him and everything would be as it was. Except when Parker got to Marion and took her in his arms he saw that not only was she dead, but she had been savagely mutilated. His screams made an unholy sound that reverberated throughout the neighborhood. Someone phoned the police.

Marion Parker’s body was wrapped in towels. Her legs and arms had been hacked off and she had been disemboweled, the cavity stuffed with rags. A wire was wrapped tightly around her neck and then drawn up and wrapped around her forehead. Her eyelids had been sewn open so that she would appear alive when Perry saw her from a car length away.

Bundles of Marion’s body parts had been scattered around town. A woman who lived about a block away from where Marion had been dumped discovered a suitcase that contained blood soaked papers and a spool of thread. The thread was a match for that used to sew Marion’s eyelids open. 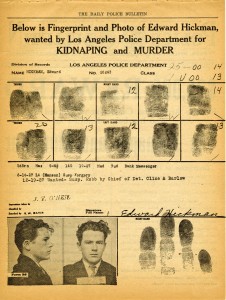 Artifacts from Marion Parker case are on display at L.A. Police Museum.

The first break in the case came when the towels that had been wrapped around Marion’s torso were identified as coming from the Bellevue Arms Apartments. A man named Donald Evans, who matched the description of the kidnapper, had rented a room in the building.  Evans was soon discovered to be an alias used by nineteen year old William Edward Hickman. Hickman had been a messenger at the same bank where Perry Parker worked, but lost his job after pleading guilty to forgery. He had had the audacity to return to the bank later and ask for his old job back, but Parker showed him the door. Parker also refused to supply a reference for Hickman when he applied for a job with another company.   The cops were beginning to glimpse a motive.

When the police arrived at the Bellevue Arms to search the apartment they discovered that Hickman had fled; but they picked up a couple of solid bits of evidence. A piece of a Brazil nut was found in a trash can in Hickman’s apartment, and it fit perfectly with another piece that had been found in the pocket of  Marion’s dress. The Chrysler coupe had been discovered and prints from the car matched prints on the ransom notes.  At least that’s what they thought; the prints on the car were later discovered to belong to someone other than Hickman 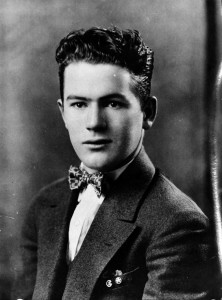 Fingerprints or not, the rest of the evidence was compelling enough to formally charge William Edward Hickman with the murder of Marion Parker.

Life was getting scary for men who had the misfortune to resemble Hickman. One poor fellow was arrested five times before he was given a “get out of jail free” letter from the police.  Another man who resembled Hickman was chased down and surrounded by a mob at Sixth and Hill streets in downtown Los Angeles. The police arrived just in time to save the man from being strung up on a light pole.

The real Hickman had left town the day after collecting the ransom from Parker. He’d carjacked a 1928 Hudson sedan on Hollywood Blvd, taken $15 from the driver, and headed north.

The hunt for “The Fox” was on.

NEXT TIME, THE CAPTURE AND THE CONFESSION.

2 thoughts on “Aggie and the Fox, Part Two:The Hunt is On!”