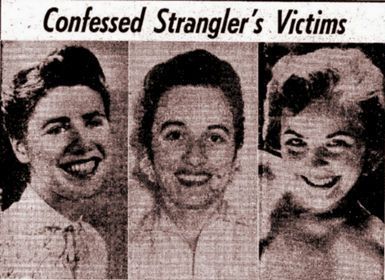 Harvey Glatman was busted when the woman he intended to be his fourth victim, Lorraine Vigil, kicked, clawed and bit her way to freedom. Instead of being celebrated for her courage, Lorraine was dismissed from her job as a result of her notoriety. Adding insult to injury reports circulated that she’d known that Glatman was an ex-con when she accepted the modeling job:

“I didn’t know he was an ex-convict. If I had I certainly wouldn’t have agreed to pose for him.”

Cops hoped to clear up more unsolved homicides of women when they hooked Glatman up to a lie detector for hours of questioning; but they would be disappointed. Homicide Lt. Herman Zander said:

“There is nothing to indicate that Glatman is connected with any other crimes at this time.”

The psychology of a killer is not a certain thing, but I believe that if Glatman had committed any other murders he would have been delighted to have taken credit for them. He couldn’t keep his mouth shut, especially about his rope.

“It seems like I always had a piece of rope in my hands when I was a kid,” he told officers “…I guess I was just kind of fascinated by rope.”

Harvey took cops on field trips to the body dump sites of his victims. He led them to a place within 25 feet of the spot where Judy Dull’s remains had been found in December 1957. He recounted his story of her murder dispassionately and without an ounce of remorse. He said that after he’d photographed and raped Judy in his Melrose Avenue apartment on the night of August 1, 1957, he had bound her hands and driven her into the desert to murder her. He never revealed his intentions to her — in fact he led Judy to believe he was going to release her in Blythe and put her on a bus.

Even when they stopped near Indio, Glatman told Judy that it was so that he could rape her again, which he did.  Then he tied her hands and feet, looped the rope around her neck and pulled it tight while pressing his knee in her back until she was dead. He left her body in a shallow grave in the sand.

Harvey confessed to officers that he’d followed virtually the same scenario in each of his subsequent killings.

Glatman’s crimes spanned miles and more than one county, but he was turned over to San Diego County for prosecution in the slayings of Shirley Bridgeford and Ruth Mercado. Against the advice of his mother and his attorney, who wanted him to plead insanity, Harvey entered a plea of guilty and eloquently argued for his own execution.

“I think,” he said, “the guilty please was proper. If I don’t think these people (his attorney and his mother) really believe I am or was inane. This is just a delaying maneuver. My actions justify my previous plea. I would reather be executed than spend the rest of my life behind bars.”

Judge John A. Hewicker wasn’t accustomed to defendants in a capital case pleading guilty, let alone demanding to be executed. He said:

“Do you realize that you are likely to be sentenced to death? You may think that’s what you want now, but as the time approaches, you may think differently.”

Glatman said he understood the likely outcome of his guilty plea and hoped it would speed the process. Judge Hewicker was taken by surprise and decided to continue the case while he tried to wrap his head around Glatman’s request.

On December 17, 1958, Judge John A. Hewicker found Harvey Glatman, 31 year old television repairman, guilty in the murders of Shirley Bridgeford and Ruth Mercado. The deceptively meek looking rapist and killer was sentenced, as he had demanded, to death in San Quentin’s gas chamber.

Glatman requested that his attorney not file an appeal on his behalf but such pleas are automatic in California for a death penalty case. The appeal didn’t make a significant  difference in the amount of time that Harvey had left on the planet — he was executed on September 18, 1959 in the gas chamber at San Quentin.

Harvey was cleverly mocked in the made-for-television DRAGNET 1966:

Negler: The reason I killed those girls is they asked me to. (pause) They did; all of ‘em.

Joe Friday: They asked you to.

Negler: Sure. They said they’d rather be dead than be with me.