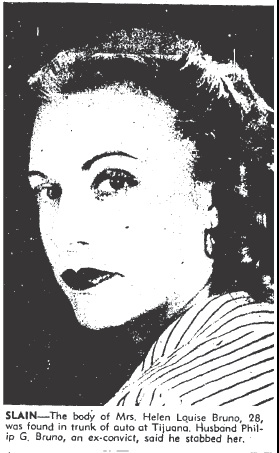 By early January 1953 Mrs. Helen Louise Bruno, an attractive 28 year-old waitress, was finished with her marriage to Philip. She filed for divorce and a restraining order.

Helen was fearful of Philip, and with good reason. She told her attorney, James Natoli, of a weird trip she had taken with her soon-to-be-ex the day after Christmas 1952.

The couple had gone out for dinner and afterwards they had taken a drive in a convertible coupe that Philip had rented in Los Angeles.

In the rear seat of the car Helen Louise noticed a brand new pick and shovel — but she didn’t think anything of it at the time. (Really? A pick and shovel in a RENTED car??? )

She told Natoli that she fell asleep during the drive and when she awakened she found that they were on the highway between Tijuana and Ensenada.

She demanded that Philip stop the car and head back to L.A., but Bruno produced a knife and told her that he was going to kill her.

Louise began to plead for her life, and as she did the significance of the pick and shovel finally dawned on her. Somehow she managed to talk Philip into putting the knife away and driving back to Los Angeles.

After hearing Louise’s harrowing story Natoli phoned the Wilshire Police Station. Officers told him that there was nothing they could do unless Bruno actually did something to harm his wife.

Louise figured she’d gotten lucky and that Philip had snapped to his senses; but all she really got was a reprieve.

Philip Bruno wasn’t an actor, he was a machinist, but he understood the importance of rehearsal, and that’s exactly what the impromptu drive to Baja had been — a dress rehearsal for murder.

On Saturday, January 17, 1953 Philip Bruno startled Hollywood police when he walked into the station and confessed to killing his wife. He said he had been brooding about the
crime all day. Then he made a statement.

Bruno told the cops that he and Helen Louise had argued in his car near Rosarita Beach at about midnight on January 17th. They fought over the terms of their divorce. Philip said that he didn’t object to the divorce per se but was opposed to the financial demands she had made.

At the height of their argument Philip snapped open his switch blade knife and stabbed her five times over the heart and once on the cheek. He threw the knife away, but couldn’t recall where.

Phillip crammed Helen Louise’s body into the rental car and abandoned it in the lot of the Commercial Hotel in Tijuana.

“After I wiped the blood off my hands I walked to the street and called a cab.”

He said he rode in the cab to the border, walked over to the U.S. side, and then took another cab to his home at 5640 Santa Monica Blvd.

Bruno arrived home at about 7 a.m. then spent the day brooding over the murder. At 10:30 p.m. he walked into the police station to surrender himself.

Philip Bruno had not only murdered his wife, but he had managed to create an international incident.

The U.S. didn’t want Bruno, and it appeared that Mexico didn’t want him either. Mexican authorities believed that he killed Helen Louise in California and driven her dead body across the border. Los Angeles County authorities said they were just holding Bruno for Mexico.

Bruno wouldn’t budge, he insisted that he’d killed Helen Louise in Baja — as an ex-con he knew that, unlike California, Mexico didn’t have the death penalty.

Baja California ultimately agreed to try Bruno for murder. Bruno would be returned to Baja from Los Angeles under a Mexico-United States extradition treaty that hadn’t been invoked since 1899. 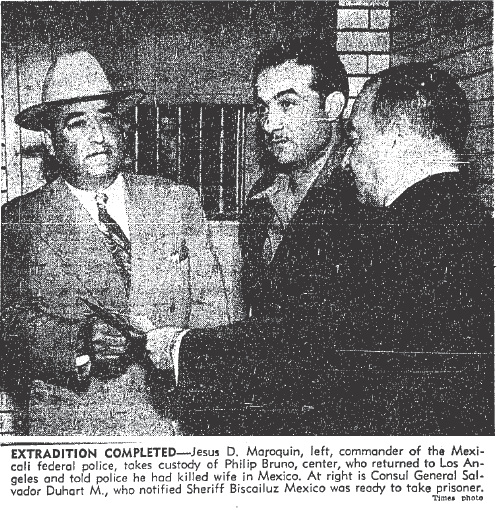 The treaty, proclaimed in April 1899, called for the two countries to mutually agree to deliver up any person connected or charged with crimes, including murder:

“Upon being informed by telegraph or otherwise that a warrant or other deposition in support of the charge has been issued…either government will hold the suspect for such time as may be practical, not exceeding 40 days.”

The legal wrangling and diplomatic machinations took months, but on May 6, 1953 Philip Bruno, described in the newspapers as the tattooed (he had 16) machinist, was turned over to Mexican authorities to be tried for murder.

On December 16, 1954, in Tijuana, Judge Mercedes Martinez Velila found the evidence insufficient to prove that Mrs. Helen Louise Bruno, 28, had been slain in Mexico and acquitted Philip Bruno of her murder!

Despite his confession and the ugliness of the crime, Philip Bruno walked away free and clear.

2 thoughts on “Rehearsal for Murder”