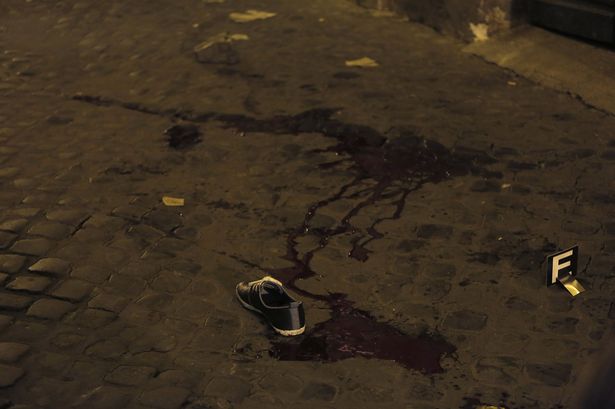 How many times have you seen a single shoe lying in the road? Did you ever wonder how it got there? I came up with an answer when I was a kid. I was convinced that the shoe was there because the owner had been snatched out of it by a violent death.

I speculated that the lone shoe’s owner may have been hit by a car, or involved in some other type of fatal incident. Even now whenever I spy a single shoe in the road it will cause me to shiver just a little bit.

My husband Scott, who is accustomed to my obsession with mayhem and murder, thought my theory was ghoulish for a kid. Hey, I never claimed to have been a laugh riot as a ten year old.

However, this next case vindicates me on the whole shoe thing.

On the night of November 21, 1953, Menlo Butler was driving with his family when his son shouted:

“Daddy, there’s a new shoe in the road!”

Menlo pulled his car over and parked approximately 50 yards east of Painter Avenue near Lakeland Road. A new shoe wasn’t the only thing Butler had discovered. He found blood-spattered, rimless glasses, the belt from a woman’s dress, and a button, comb, penny and two unfired .38 cartridges. He was trying to decide what to do next when L.A. Sheriff’s Deputies, Rowley and Webster, accompanied by a young woman, pulled up in a patrol car.

Butler turned to the cops and said:

“Officers, look what I found.”

He showed them the belt and other items he’d found in the road, and then he said:

“And look over there.”

He pointed to the south shoulder of Lakeland Road where Deputies Rowley and Webster saw the body of a man lying on his face in the weeds. They phoned in for an ambulance which came and took the man to Pico Emergency Hospital where he was pronounced dead on arrival by Dr. Merrill Colton.

The young woman who had accompanied Deputy Sheriffs Rowley and Webster to the scene of the shooting was twenty-one year old Dolly McCormick. She had been with the victim, identified as thirty-three year old Andrew Kmiec, when he was shot. Somehow she had managed to escape the assailant, flag down a passing car, and get to the South Whittier Pharmacy at 13331 Telegraph Road where she phoned the cops from a booth.

When the deputies rolled up to the pharmacy they found Dolly waiting for them. The officers asked her to get into the radio car so she could direct them to the scene, but she hesitated — she was terrified. She said:

“No. I don’t want to go back there – he is still there and he will shoot me.”

When asked who “he” was, Dolly said she didn’t know, the man was a stranger.

Dolly told Rowley and Webster everything she could recall from the time that Andrew Kmiec, the victim, had picked her up in North Hollywood at approximately 4:30 p.m, until the shooting in South Whittier about two hours later.

Andrew and Dolly had planned a dinner date, but first Andrew had an errand to run and he wanted her to accompany him. He had advertised his car, a 1953 Mercury convertible, for sale in the papers and a man had called him and wanted to meet him at the Biltmore Hotel, downtown, at 5:30 p.m.

The couple drove to the Biltmore  where Andrew left Dolly to wait for him while he ran into the lobby to meet the prospective buyer. A short time later Andrew returned with a man, whose name Dolly couldn’t recall. The stranger told Andrew that he liked the car but wanted to show it to his wife. If she liked it Andrew would be paid in cash that evening.

Dolly said that the man sat on her right in the front seat of the car and they drove toward Whittier. The trio made small talk during the drive. The man told them that he worked in the pottery business, but Dolly became suspicious of him because it seemed to her that he was lying about his position. He gave odd answers to her inquiries and contradicted himself a couple of times. She was further alarmed when he was unable to provide clear directions to his home.

Finally, they pulled up in front of a house on a dark street and the stranger pulled a gun. Dolly said Andrew told the man he could take all of the money he had, the car, and some stocks and bonds at home if he would let them go. The stranger told him no, that he was a killer, hired to do away with Andrew and that he was being well paid for the job.

Pointing his weapon at Andrew, the stranger told him to get in to the rear seat. He then asked Dolly if she could drive. When she said yes the man motioned her into the front seat and told her to take the wheel. The stranger sat next to her, but kept his weapon pointed at Andrew.

Finally the man told Dolly to stop the car, then he leaned over the back seat and fired three shots at Andrew. Dolly quickly got out of the car on the driver’s side. She thought the killer had grabbed the belt of her dress, but it didn’t slow her down. Neither did the shot she thought she heard ring out as she ran for her life.

4 thoughts on “The Want Ad Killer”