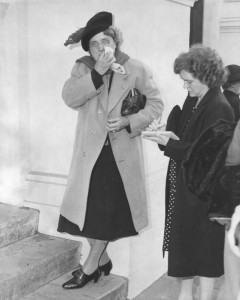 It has been a long time coming but I am very pleased to announce that Agness “Aggie” Underwood now has her own Wikipedia page!

I submitted the entry for review on December 31, 2012 and it was approved and up by the next day, January 1, 2013! Aggie’s contribution to newspaper reporting in Los Angeles was profound. She was a reporter from the late 1920s until she was promoted, at the Herald-Express, to city editor in 1947. She was the first woman in the U.S. to hold that position.

As city editor for the Herald she continued, until her retirement in 1968, to direct her reporters to the headline making stories that would keep Angelenos on the edge of their seats.

Please stop by and visit Aggie’s page; more information, and a photo or two, will be added in the weeks to come.

I want to take this opportunity to thank those of you who have commented on the blog so far. I hope that you will continue to enjoy Deranged L.A. Crimes as we follow in Aggie’s footsteps through streets of Los Angeles.