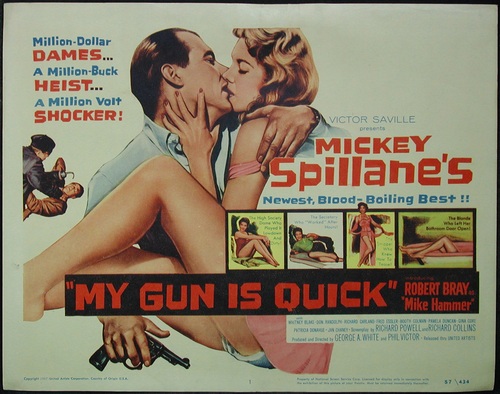 Welcome! The lobby of the Deranged L.A. Crime theater is open! Grab a bucket of popcorn, some Milk Duds and a Coke and find a seat. Tonight’s feature is MY GUN IS QUICK (based on a novel by Mickey Spillane) starring Robert Bray and Whitney Blake.

In a Los Angeles diner, tough private detective Mike Hammer takes pity on Red, a young woman who has come from Nebraska to try to break into movies, but is now down on her luck. After Mike buys Red some soup, she is threatened by Louis, a thug, who tries to get her to leave with him. Mike beats up Louis, then provides Red with money for her bus fare back home and gives her his name and address so that she can let him know when she arrives. As they part, Mike notices a unique ring on Red’s finger. A few hours later, police detective, Capt. Pat Chambers, questions Mike about Red, because his name was found among her belongings after she was killed in a hit-and-run car accident.

Was Red’s death really an accident?  You know that Mike Hammer will bitch-slap or brutally beat every miscreant in Los Angeles until he gets answers!

There is time for a cartoon before the feature begins — tonight it’s GOOFY: HOW TO BE A DETECTIVE.