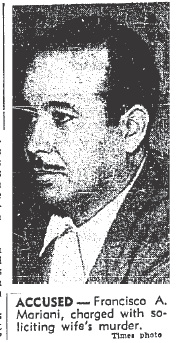 In late March, 1953 the Sheriff’s Department received a tip from a man named Francisco Rodriguez.  Rodriguez claimed that his friend, retired Pasadena antique store owner Francisco Mariani, had asked for his help in finding an ex-con who would be willing to commit a murder.  Mariani wanted to be rid of  Grace, his wife of only four months.

Rodriquez didn’t want any part of a murder so, without saying a word to his pal, he ran right to the Sheriff’s Department and spilled the whole story. Rodgriuez seemed credible to the deputies, but they needed to investigate further before any arrest could be made. Lt. D.H. English assigned Sgt. Clarence Serrano to go undercover as an ex-con without a conscience who was willing to do anything to get his hands on some cash.

Rodriguez introduced Mariani to the false hitman. Serrano said he’d take the job but he objected to Mariani’s low-ball offer of $500 to do the deed.  The two men haggled for a while and finally agreed that it would cost $1500 to end Grace’s life.

The widower-to-be had an elaborate plan all worked out and he explained it to Serrano in minute detail–he even supplied one of his old neckties to be used as a garrote. Mariani said that he would hide a large sum of money in the home on Concha Street where Grace was to be permanently dispatched. The hitman would ransack the house following the murder so that it would appear that the crime had been a robbery gone wrong. Mariani thought he was smart when he asked Serrano to provide him with proof that he’d earned his fee. Mariani said he’d be satisfied that “the job had been done” only when Serrano brought him the expensive ring that Grace always wore. 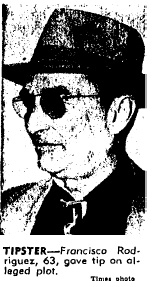 Once Serrano and Mariani had sealed the deal the Sheriff’s deputies had no choice but to take Grace into their confidence. She was disbelieving at first, after all she and Francisco were still newlyweds–why would her new husband want her dead?  Despite her misgivings, she turned the ring over to Serrano.

Mariani was playing cards at a Gardena gambling house when Serrano strolled up to him, handed over Grace’s ring and said, “It’s all done”. The suspect took the ring and then handed Serrano five $100 bills in partial payment for services rendered. He’d promised to may the rest of the money when the insurance company paid off on claims for three platinum and diamond rings that the “killer” was supposed to take.

The next time the rotund little man looked up from his cards he was he was surrounded by a group of deputies who summarily cuffed and arrested him. It was hours before he realized that he had been betrayed and that the hitman was actually Sgt. Serrano of the the LA County Sheriff’s Department.

Unwilling to come clean about the murder-for-hire plot, Mariani went into full denial mode saying: “It’s all a lot of lies. . . none of it is true.  I know what to say in court.”

Mariani had another surprise coming. In addition to plotting the murder of his wife he was suspected in the death, just a few months earlier, of his sister-in-law, Miss Emeline Gertrude Sullivan, 73. Emeline’s death was thought to have been caused by complications from several heart attacks she had suffered in the couple of days before her demise. Mariani had bragged to Rodriguez that he’d laced the woman’s eggnog with strychnine and that she’d died within an hour. He was proud of his “perfect crime”.

One thing is for sure, Mariani didn’t know how to keep his mouth shut and he had made a huge mistake when he chose Rodriguez as his confidante. Francisco Rodriguez had not only dropped a dime on his buddy for the murder plot and the poisoning; the year before he had cautioned Mrs. Mabel Dorr to be careful of her new suitor, the suave Puerto Rican businessman, because he intended to bump her off, sell her property and make her the first link in a chain of Bluebeard slayings. Dorr took Rodriguez’ caution to heart and dropped Mariani like a hot rock. She later said about her brief association with Mariani: “All he had on his mind was money, money, money.” 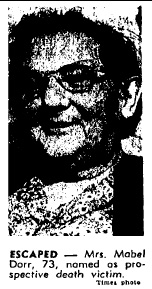 Grace was so horrified by the plot to kill her that she immediately began divorce proceedings. The ink was barely dry on her four month old marriage license when she appeared in Pasadena Superior Court to request a divorce.

Grace was pursuing the divorce from her husband, but she still had to deal with the allegations against him for the poisoning of her sister. She agreed to have her sister’s remains exhumed for testing. As the exhumation went forward more damning evidence about the murder plot was being revealed. Sgt. Serrano had worn a wire and had recorded Mariani haggling with him over the price to be paid for his wife’s murder.

The former antique dealer didn’t miss a beat in his denials.  He smiled when deputies played the wire recordings for him. He said: “Somebody make joke?  Somebody imitated my voice.  That’s not me.”

The D.A. didn’t buy his denials and a formal complaint charging Francisco Mariani with solicitation to commit murder was filed by Deputy District Attorney John Loucks in Pasadena. Bail was set at $50,000. 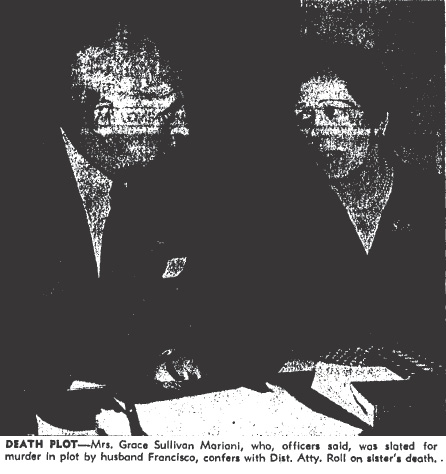 It seemed like everything was wrapped up–Mariani would face trial and Grace would win her divorce.  But then the unexpected happened. Grace withdrew her request for a divorce. She had decided to stand by her man!

Would the fact that he had Grace’s support make any difference in the outcome of the solicitation case?  Had Francisco Mariani poisoned his sister-in-law and why did he want Grace dead?

Next time: More revelations, and 160,000 reasons why Mariani wanted his wife dead…

One thought on “Til Death Us Do Part”