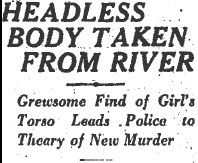 The Los Angeles River begins in Canoga Park, flows through the San Fernando Valley, through Downtown L.A. and then continues through several cities before reaching Long Beach where it empties into the Pacific Ocean. A series of devastating floods during the first thirty years of the 20th Century caused such public outcry that the River was channelized–encased in concrete–by the Army Corps of Engineers. But in 1929 the river was still free flowing and many Angelenos looked to it for their livelihood.

It had rained hard enough on April 4, 1929 to set a record–1.39 inches; but the wet weather hadn’t kept Raymond Manriquez and his father Juan from trolling the banks of the Los Angeles River for salvageable items. They were walking along the river bank when, about 100 yards north of Clark Street in Lynwood Gardens, they eyeballed a box that had washed ashore. Something pale was lying near the box but they couldn’t tell what it was until they moved in for a closer look. All thoughts of the box and its contents were forgotten when they realized that what they had found was a woman’s torso.  The arms were severed and the legs torn off.  It had been decapitated. They immediately went to notify the authorities. 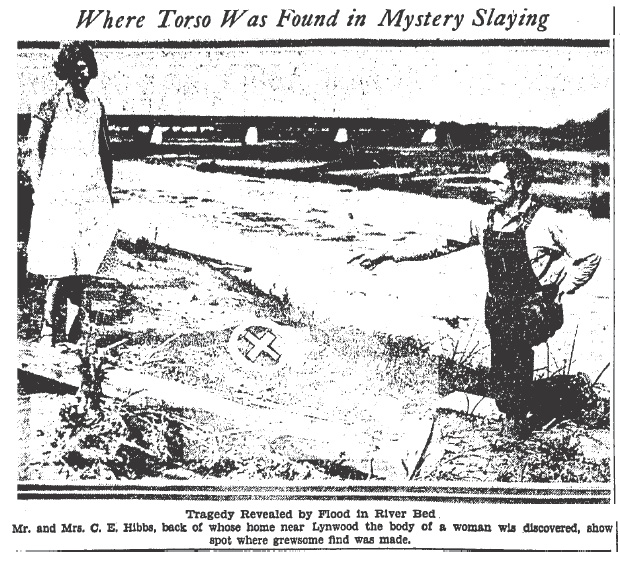 Constable Roselle of Compton accompanied the men to the scene of their grisly discovery and he then contacted Captain Bright, head of the Sheriff’s Homicide Squad. Captain Bright and Deputy Sheriffs Hutchinson, Gray and Vejar turned up to begin an investigation. All that was surmised from the scene was that the body was that of a girl between the ages of 16 and 21 and that she had been murdered and mutilated elsewhere before being dumped into the water.

With no evidence aside from the torso, Sheriff’s investigators were preparing themselves for the possibility of a long, and ultimately fruitless, investigation.

Through the press, and in radio broadcasts over ten local radio stations, Captain Bright issued a plea for all citizens of Los Angeles to report any missing woman. Bright said:

“The help of every citizen is needed to solve this crime, which apparently is the work of a fiend. The woman’s torso provides no clew to her identity.  Only by checking the disappearance of every woman reported to the authorities will we probably get a trace of the murderer.”

County Autopsy Surgeon Wagner concluded from his examination that in life the woman was approximately 25 years old, 5 feet 7 inches tall and likely weighed 135 pounds.  Her hair was brown or blond.  The woman’s vital organs were delivered to County Chemist Abernathy for analysis–he was going to test for poison. However due to the extreme measures the killer, or killers, had taken to conceal the identify of the corpse it seemed improbable that the woman had met her death by poison. The consensus of the experts was that she had been shot to death or killed by a blow to the head. A head which they had been unable to locate. 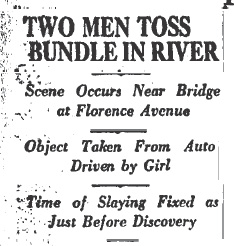 Based on the river flow  it was determined that the torso had been dumped into the water no further north than the Ninth Street Bridge. The limbs had probably been thrown in at the same location but they wouldn’t float as the torso had done. The Sheriff’s Department planned to drag the river for the missing body parts.

After further examination of the torso, the medical examiner deduced that the murderer had some surgical skill because the removal of the limbs and the head had been accomplished by someone possessing a knowledge of human anatomy, and a very sharp instrument–perhaps a scalpel.

Following Captain Bright’s plea dozens of reports of missing were received. A few other, more sinister events, were  also reported.  A female informant said that she had seen two men and a young woman in a black touring car drive to the edge of the river bank at the Florence Avenue Bridge. The men got out of the car carrying an unidentifiable object to the river while the girl remained at the wheel–then the trio sped off. 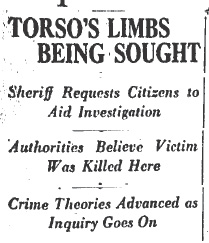 Gas station attendants and car rental agencies were put on high alert and asked to report any suspicious characters and in particular any blood stains they found.

The first real clue in the case came about two days after the discovery of the torso when a virtually new, size six, green leather shoe with a yellow ankle strap and a turquoise button was found on the river bank near Compton. In retrieving the shoe Deputy Sheriff Allen sank waist deep into the muck and had to be rescued by a half-dozen men who tugged him to safety.

As with any gruesome crime the scene attracted looky-loos. Several deputy sheriffs were kept busy shooing away crowds of morbidly curious sightseers. It was feared that one of them would get caught in the quicksand, as Deputy Allen had–or that someone would find a significant piece of evidence and walk off with it.

Since it was believed that the the limbs and head of the dead woman had been removed by someone with a modicum of expertise in dismembering a body, Captain Bright began to investigate a couple of local physicians. One unnamed doctor was placed under surveillance and another medical man, a shady character who had run off with an 18 year old girl, was being sought for questioning.

Captain Bright and his homicide squad continued to hope that the torso would finally be identified, but it wasn’t looking good.

NEXT TIME:  Will Captain Bright and the Sheriff’s homicide squad finally identify the victim?