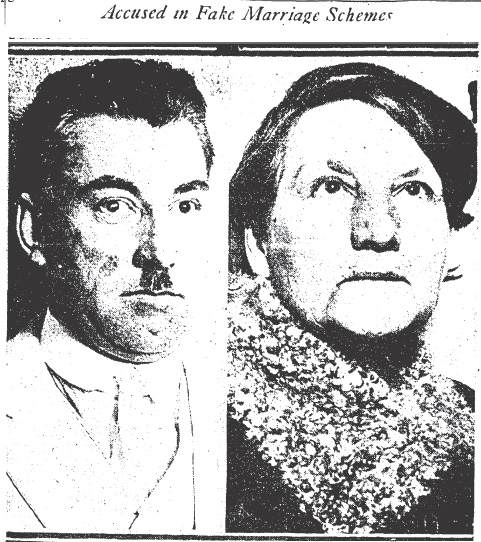 On July 19, 1924 the Los Angeles Times updated their readers on the status of the police investigation into John Bertrum Clarke: “The sordid activities of John Bertrum Clarke, author, minister of the Church of Cosmic Truth, and love pirate, unraveling gradually yesterday as police investigation went deeper into his life, included among other revolting incidents an attempt to enmesh a 15-year-old girl in the same maze of occult and physical domination that the man essayed with practically every woman with whom he came in contact.”

For his part, John continued to declare his love for Cecyle Duncan, the police operative he had wed in a bogus ceremony he had conducted himself. Wearing a white serge suit, white shoes, and white hat, all of which were stained with grease and smudged with dirt, John declared his undying affection for Cecyle. He insisted that she was the love of his life and he couldn’t believe that she would betray him. John said: “…She is my real love. The marriage is entirely legal. It is my great work, my book, my work…”

The police searched John’s card and correspondence files (he, or more likely his assistant Cora, was a meticulous record keeper) and found a girl named Clara Tautrim, 946 Grattan Street. She was only 14-years-old in 1923 when she first met John. He was distributing his literature door-to-door and some of it looked interesting to her. On her first visit she was accompanied by an older female acquaintance and nothing untoward occurred.

In May 1924 John initiated contact with Clara and asked her to visit him at his South Fremont apartment. He said he could help her find a job. Clara stopped by his apartment on her way home from school. She’d barely put a foot in the door when he began to bombard her with his usual line of patter. She was his soul mate and together they would amass a fortune and live on a sumptuous estate in India. Wild-eyed and rambling, John grabbed Clara and kissed her–it was then that she became truly frightened. John, over 30 years her senior, wasn’t exactly Clara’s dream man. Besides he was behaving like a lunatic. Clarke’s big plan  was to make her a motion picture star. Clara wasn’t in the least bit starstruck and had no desire to pursue a career in show business. John refused to hear her out and began a letter to C.I. Berry.  Berry, he explained, was a male director and a big wheel in motion pictures. Of course the fictional director was none other than his favorite patsy and  faithful amanuensis, Cora Irene Berry Gillen.

Clara managed to disengage herself from John’s embrace and left, but not before he made her promise to return the next day. She did as she’d promised, but wisely brought her mother Caroline with her. John was briefly thrown off-stride when he saw Caroline but he soon recovered himself and pitched a few of his crackpot plans for Clara’s stardom to her disbelieving mother. He said that if Clara was entrusted to his care he would take her to India where she would be a princess. Caroline refused to part with her daughter, so John modified his plan to include Caroline. The three of them could go to India and live in the lap of luxury. When Caroline rebuffed him, John became distraught. He said that their refusal would mean he would never attain the power or recognition he deserved. As soon as they were able Caroline and Clara bolted from John’s apartment.

John’s ego was so massive that Caroline’s rejection didn’t dissuade him from his further pursuit of Clara. He called the Tautrim home repeatedly.  When the calls didn’t give him the results he wanted, he appeared on their doorstep. He arrived bearing a letter and $5 for Clara. He said if she would come to his apartment the next day he’d buy her a new hat. When he was told that Clara wasn’t at home he left the letter, but kept the $5.

John’s relentless pursuit of Clara ended only when her mother said she was going to call the police and have him arrested. Clara told investigators: “I was afraid of him. I did not know what he was talking about half the time, but I did not like to have him kiss me or put his hands on me. He told me he was going to take me to India to become a princess or something, and he was going to give me jewels and pretty things. When mother told him I could not go he said we had spoiled his plans to become a ruler of the world.”

The police thought that they had sufficient grounds to charge John with contributing to the delinquency of a minor but they couldn’t make it stick and had to cut him loose. If the goal was to see John behind bars the police would need more. Fortunately there was plenty of dirt to dig up on John.

Captain Plummer and Detectives Hoskins, Berenzweig, and Harris uncovered voluminous files consisting of cards, correspondence. The detectives found evidence that John had married at least three women in the month prior to his arrest. The mountain of documents proved that John had likely victimized thousands of women. John wasn’t discriminating, any woman with whom he came in contact was a potential victim. He had romanced or terrorized movie actresses, social workers, elderly women, and teenage girls.

The most astonishing revelation was a “soul slave contract” between John and Corinne Bradford Ko’Vert. Corinne’s stage name was Mary Savage (IDMB shows two film credits for her under Corinne Bradford). The contract was dated May 14, 1922 and signed by both parties and witnessed by Mildred Gillen, undoubtedly an alias for Clara I. Berry.

Here is the document in full:

“I, the undersigned, Corinne Bradford Ko’Vert, hereby make a voluntary contract and agreement with John Bertrum Clarke to do what he tells me to do in a business and social way for a period of one year from May 14, 1922 to May 14, 1923. I will see him during this time when practical every day by appointment and will keep him informed in full of all my engagements in business and social life, and will make no radical changes without consulting him. I will make every effort and resolve to keep control of myself and my temper, and I will do every practical possible thing to win a favorable reception and large salary or income in the motion-picture business.

“I will take the best care of my health, keep regular hours and habits of eating, sleeping, etc. I wll abstain from all use of habit forming drugs, intoxicating liquors, and tobacco, except when the actual picture work during acting requires the smoking of cigarettes.

“I shall be very careful of my public or semi-public activities and endeavor to maintain a good public reputation.

“I will make no contract with any person, persons or corporations that would interfere with my carrying out the above agreement with Clarke.

“In witness whereof I affix my signature this day of May, 1922.”

In addition to the contract detectives found two notes totaling $460 (equivalent to $6517.88 in 2016 dollars). Apparently Mary found the contract too restrictive because she wrote John a note amending its conditions:

“To see you every day as you wished takes very nearly the whole afternoon, leaving not time for other matters. I will see you when it is possible, and we will have to let it go at that. I am so sorry not to have been in to see you, but after returning home the other day I thought things over and came to the realization we were wasting a lot of perfectly good time and getting nowhere.”

Mary successfully avoided reporters but they found her husband, Frederick Ko’Vert, in his dance studio at 3790 Denker Avnue. The couple had an unusual marriage. Frederick was a well known female impersonator and evidently Mary was equally well known as a male impersonator. With so much in common you’d think that they would have gotten along but according to Frederick: “We never lived together and separated the day after our marriage.” In fact their divorce had recently become final. He said he’d never heard anything about John and had no idea who he was.

Reporters had no problem finding John, he was in the City Jail. He had no reservaations and talked freely about the contract: “Miss Bradford was brought to me by her mother. I have known Mrs. Bradford for several years. The girl had been working very hard. She was to be starred in a play and was to be made a motion picture star. She was disappointed, discouraged and betrayed in a business way by the people she trusted. So she came to me for spiritual and mental help and for business advice. The contract was the result.” What about the $460? John said the money was to pay for his assistance and he made no profit.

John’s papers didn’t only reveal the soul slave contract. Detectives found correspondence that showed he was attempting to establish an enormous spy network so he could capitalize on confidential information he received from hundreds of his clients from a wide variety of fields. The motion picture business in particular had the potential to make John a fortune. He had set his sights on an attorney, Herman L. Roth–but before John could get a dime from him the attorney was convicted and sentenced to San Quentin for extortion.

The newspapers reported daily on John’s misdeeds. It appeared that there was no end to the schemes he had concocted to separate gullible people from their money. The sexual misconduct was disturbing, but what if the man the press was calling a “Love Pirate” had actually been responsible for the death of two women?