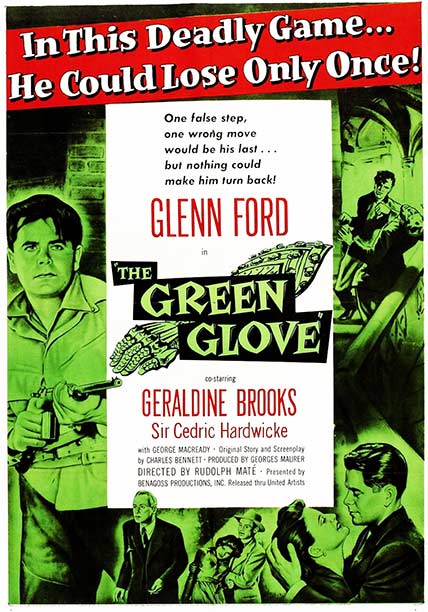 Welcome! The lobby of the Deranged L.A. Crimes theater is open! Grab a bucket of popcorn, some Milk Duds and a Coke and find a seat. Tonight’s feature is THE GREEN GLOVE starring Glenn Ford, Geraldine Brooks, Sir Cedric Hardwicke. Enjoy the movie!

In the village of St. Elizar in the south of France, Father Goron hears the church bells ring for the first time since the church’s prized artifact, the green Gauntlet of St. Elizar, was stolen years earlier during World War II. As the villagers race to the church, the priest discovers a dead man in the bell tower. Years earlier, just after the Allied invasion of France in 1944, American paratrooper Lt. Michael Blake flees into an abandoned Parisian building and discovers German art dealer Count Paul Rona. When Michael tries to arrest the German, Rona bargains for his life with the information that the German Army will attack at dawn, and with a bejeweled green glove which he places in Michael’s backpack.