About 2 p.m. on Tuesday, September 17, 1946, Jack Singleton, an employee of Central Airport, was driving down Sepulveda Boulevard near Lincoln Avenue when a man flagged him down. The man’s car was stuck in the sand, so Singleton pulled over to offer aid. Singleton noticed that the Chevy sedan had a fresh coat of paint. Singleton hooked a rope over the bumper to free the car. As Singleton was securing the rope he saw something that struck him as odd– the license plate had been partially painted over. Together Singleton and the stranded man were able to pull the car out of the sand. As Singleton drove back onto Lincoln he saw a Highway Patrol car approaching from the opposite direction. Singleton signaled to the officer.  They pulled next to each other and talked for a few moments. Singleton told the officer he thought that the car that he’d just helped pull out of the sand was stolen. The cop agreed the painted license plate sounded fishy and sped off in pursuit of the suspicious car

Seconds later John A. Rose, the operator of a service station at 328 Lincoln Boulevard, saw a black Chevy blow through a stop sign at Lincoln and Sepulveda. Rose’s best guess was that the driver was going roughly 65 to70 mph–and right behind him was a Highway Patrol car. Rose recognized the car as the one always driven by officer Steve Sodel. Rose knew it was Sodel’s car because it was kind of beat up–more so than some of the others he’d seen around. The pursued and pursuer disappeared down the highway and Rose went back to work.

George Osborne, an aeronautical engineer, was headed to his W. Imperial Highway home when he noticed that a 1941/1942 dark colored Chevrolet was parked alongside the road. Right behind it was a Highway Patrol car. Like most of us, he was likely relieved that it was some other poor clown getting a ticket.

Sixteen minutes after Osborne saw the Chevy and CHP car at the side of the road, Sodel’s black and white radio car was found abandoned on Jefferson. 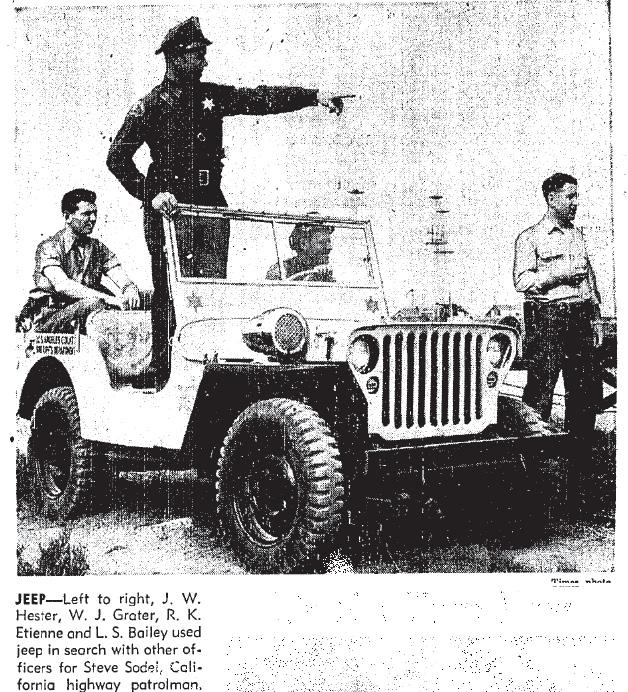 The next day over 100 CHP officers combed Venice and Playa del Rey for Sodel, but they didn’t find a trace of him.  Even a blimp took to the air in an attempt to find the missing man. Dozens of tips were phoned in, but none of them panned out. 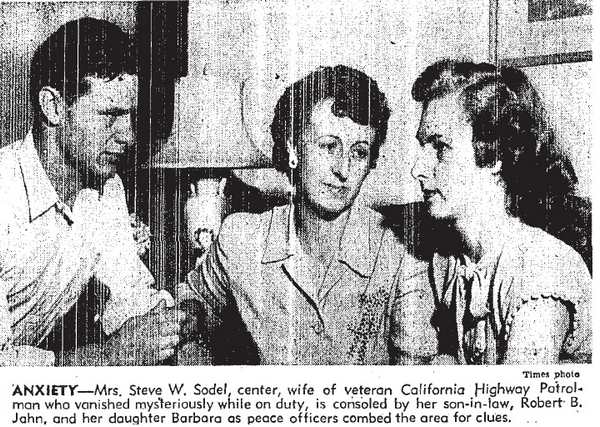 Steve Sodel was not only a dedicated lawman, he was the former Commander of the American Legion’s Star Post No. 309. In an effort to get a lead in the case the post offered “a substantial reward for information leading to the arrest and conviction of a person or persons responsible for his disappearance.”

NEXT TIME: The search for Steve Sodel concludes.