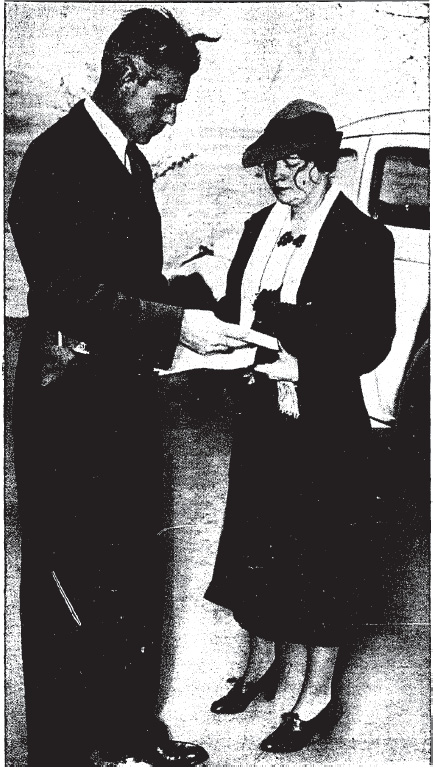 Louise Peete spent approximately 18 years in prison before her release in 1939. Did she kick up her heels in joy when walked out of Tehachapi? Not at all She was angry and bitter and let the world know it by handing out a written statement to the reporters who had come out to Tehachapi to cover her release. Her statement read:

“Twenty-one years ago I pleaded not guilty to murder. I still plead not guilty. After having served 18 1/2 years in bondage for a crime I did not commit, I would appreciate the opportunity to reestablish myself without further publicity. I appreciate the parole and shall not violate the faith placed in me.”

Among Louise’s boosters were Miss Monohan, superintendent of Tehachapi Women’s Prison, and Mrs. Emily Latham, Louise’s probation officer. Neither of them doubted Louise’s sincerity. As could have been expected, Louise had put on a very convincing act in a  performance that lasted for eighteen years!

Not everyone was a member of the Louise Peete cheering section. In fact the Los Angeles Times printed an opinion on the case:

Louise left prison behind her and faded into obscurity; that is until December 1944 when she was once again in the headlines for another murder! 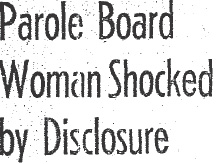 The body of a woman, believed to be Mrs. Margaret Logan, 60, of 713 Hampden Place, Pacific Palisades, was found in a shallow backyard grave. Logan had employed Louise as a nurse/companion

It was “deja vu all over again”.

Louise assumed her familiar role as the outraged innocent, but there was a mountain of evidence against her. Ray Pinker, head of the police crime lab, examined the physical evidence. In this case the most damning piece of evidence was a nickel-plated .32 caliber revolver, rusty and covered with congealed blood. The weapon was found in a dresser drawer in the the dead woman’s home. The revolver was engraved with the initials E.B.L. and had once belonged to Emily B. Latham — Louise’s parole officer! Latham had employed Louise as a nurse and companion. Unfortunately, Latham wasn’t available to be questioned — she was dead. The cops were understandably concerned. Louise’s employers had a way of expiring under suspicious circumstances. However, it was later determined that Latham had died of natural causes.

Further examination and tests concluded that Margaret Logan’s death had been caused by a gunshot and a brutal beating. Evidently while she was incapacitated Margaret had been hammered to death with the butt of a gun. 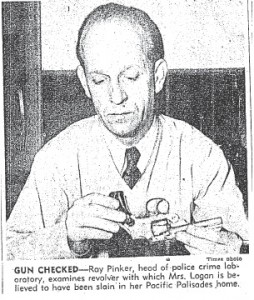 Could 63 year old Louise have been capable of the crime and the cover-up on her own? She certainly could have shot and bludgeoned Logan by herself, but dragging the corpse out to the backyard and digging even a shallow grave may have been physically taxing. It’s possible that Louise may have had an assistant.

Just a few months before Logan’s murder Louise had married again. She had been living and working under the name of Lou Anne Lee, and because her husband was from out of state he knew nothing of her notorious past.

Louise’s husband was Lee Borden Judson, and unfortunately for her he was a man with a conscience. Judson found himself charged with “possessing guilty knowledge as a principal” in Logan’s slaying and the Coroner’s Jury recommended that both he and Louise be held for trial. Louise took the 5th at the Coroner’s Inquest, and then desperately attempted to mitigate Judson’s statements which were incriminating to say the least.

Judson described how, on the day of the murder, Louise had left their Glendale home to visit the Logans. She told him that she might be late getting home. About 9:45 that night Louise phoned to say she was going to stay overnight with the Logans. Judson wasn’t happy about the arrangement because Louise had told him that Mr. Logan was mentally unbalanced and sometimes became violent.

According to Judson, the next day when he arrived at the Logan’s he was met outside by Louise. She was dressed in an old pair of slacks and appeared distraught, as if she’d been crying. When he asked her what was wrong Louise spun one of her more imaginative tales; and that’s saying something. Judson stated that Louise had told him that: “Mr. Logan had jumped on Mrs. Logan and had bit her on the neck and cheek…and that Mr. Logan had bitten off the end of Mrs. Logan’s nose.” Judson then asked Louise if she had saved the part of the nose that was bitten off, but she told him that she hadn’t.

Judson testified that he entered the Logan’s residence to find a very large spot of blood on the living room rug, and he found Mr. Logan pacing around the house like Lady MacBeth saying: “I’ve got some blood on my hands–where did I get it?”

Louise took charge of the situation and tried to calm Mr. Logan by telling him that his wife was fine, that she was “away on some real estate deal”.

On the day following the discovery of the blood on the carpet, Judson said that he and Louise took Logan to the psychopathic parole office of the County Lunacy Commission and had the man committed. 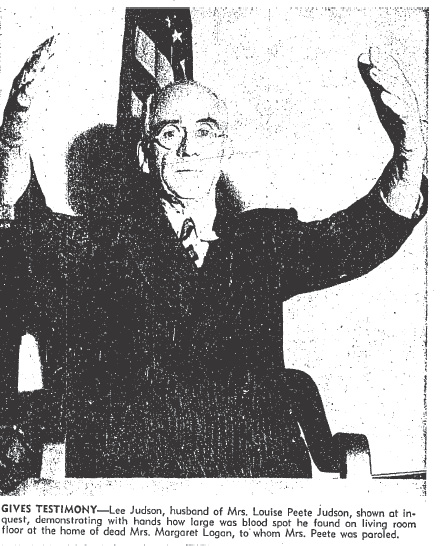 What Judson didn’t know was that Louise had masqueraded as Logan’s sister in order to have him committed. Louise was undoubtedly relieved when, during her trial, Mr. Logan died in the psychiatric hospital.

Judson probably had no idea that the blood spot on the carpet had anything to do with a murder. Louise told him, and anyone else who asked, that Mrs. Logan was in a sanitarium undergoing plastic surgery to repair the facial injuries she’d suffered in the asserted insane attack by Mr. Logan!

The story was a variation of the the tale Louise had told about Jacob Denton two decades earlier. You’ll recall she told people that he was away being fitted for, and learning to use, prosthetic limbs as the result of an attack he’d suffered at the hands of a sword wielding Spanish speaking woman. 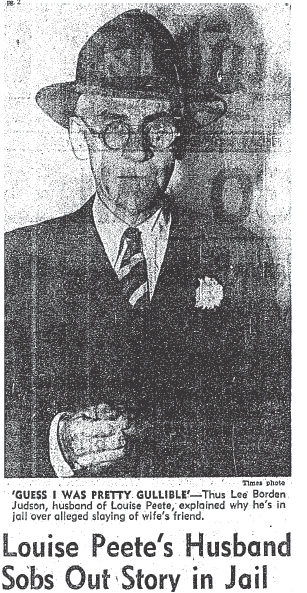 Judson was becoming a major liability for Louise. He testified that he’d seen her sign a check for $2500 on Mrs. Logan’s behalf. The reason Louise gave Judson for signing the check was that Mrs. Logan’s right arm was paralyzed! Even though, as her husband, he wasn’t able to testify against her, everything he said in his own defense brought her closer to the gas chamber.

In a bizarre side note, while Louise was cooling her heels in the County Jail her cellmate Mrs. Constance Renner (no relation to me that I’m aware of) attempted suicide by taking an overdose of sedatives she’d been given to calm her nerves. Louise heard Renner’s labored breathing and struck a match to see what was going on. She saw foam on Renner’s lips and alerted the matron, thus saving the woman’s life. The cell was later searched because five of the sedative tablets were unaccounted for. You’ll never guess where they were found — Louise had stashed them in her hair! She said she hidden them so that she could give them to the jail chief later, but it’s obvious that she was keeping them just in case she needed an exit strategy. 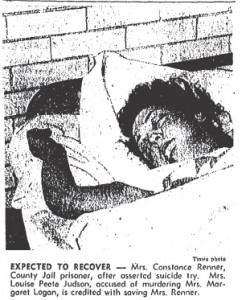 Things were going from bad to worse for Louise. The State of California contended that her marriage to Judson wasn’t legal.; then they dropped the charges against him and cut him loose. Judson was greeted by his son and daughter following his release and he should have been on his way to happier times but instead, less than twenty-four hours after he was freed, Lee Judson went over to the Broadway-Spring Arcade Building and hurled himself down a stairwell to his death. Whether Judson’s guilty knowledge of Louise’s actions included him actually assisting her in the burial of Margaret Logan’s remains we’ll never know. He was a decent man and it likely that the shame of sharing a life, if only for a few months, with a killer was too much for him to bear.

Louise took the news with a great deal of weeping and drama, but declined to attend Judson’s funeral saying “I prefer to remember him as he was”.

Louise was once again facing a murder charge on her own.

NEXT TIME: Louise meets her fate.