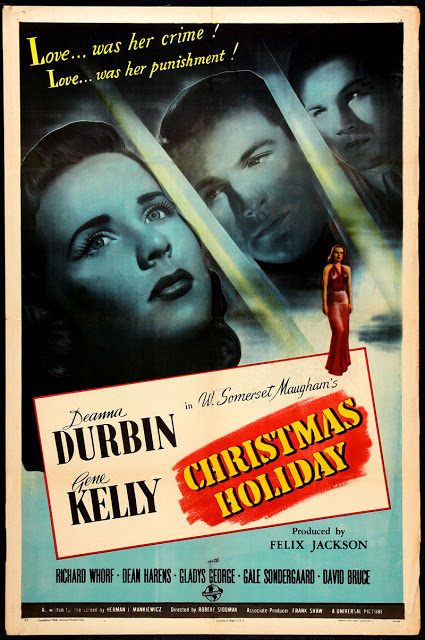 Welcome! The lobby of the Deranged L.A. Crime theater is open! Grab a bucket of popcorn, some Milk Duds and a Coke and find a seat. The holidays have a dark side, and to prove it tonight’s feature is CHRISTMAS HOLIDAY starring Deanna Durbin and Gene Kelly.

After receiving his commission on Christmas Eve, Lt. Charles Mason learns that Mona, his longtime girl friend, has married another man. When his plane from North Carolina to San Francisco is forced by bad weather to land in New Orleans, the heartbroken Charles meets alcoholic reporter Simon Fenimore, who takes him to a brothel run by Valerie De Merode. There Charles is introduced to hostess/singer Jackie Lamont, and agrees to take her to a midnight mass. After the church services, the two go to a diner, where Jackie tells Charles that her real name is Abigail and that she is the wife of convicted murderer Robert Manette. At the diner, and the next morning in his hotel room, Abigail tells Charles the story of her relationship with Robert.