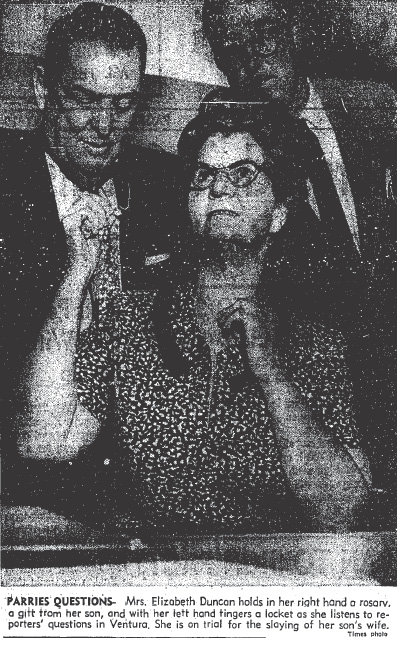 Elizabeth Duncan’s plea of not guilty by reason of insanity would ultimately fail. She was interviewed by shrinks and she even submitted to a brain wave test, but nothing about her tests indicated that she was insane.  Dr. Louis R. Nash, assistant director of Camarillo State Hopsital, described Elizabeth Duncan as a “psychopathic personality” and a “pathological liar”, but said that she sane.

On January 30, 1959, Luis Moya withdrew his not guilty plea and entered a plea of not guilty by reason of insanity. Gus Baldonado would quickly do the same. And, just like Ma, they would be found sane.

One of the most difficult tasks was to find jurors who could be fair and impartial. During voir dire many of the prospective jurors revealed that they had already made up their minds and felt that the defendants were guilty. In fact, Ma and Frank received a lot of hate mail.  A news photo arrived for Ma with multiple epithets scrawled in red ink: “Hope you hang.” “You should have died before you were born.” “Cutthroat.” “I could kill you.” “Apron strings.” “Mamma’s boy.” An anonymous letter posted in San Francisco said:

“Your daughter-in-law was a fine, clean, decent person. She and her unborn child was murdered. I hope the state will execute those involved in that crime. It was a cruel, rotten deal.”

The jury of eight women and four men was finally seated. They must have felt their responsibility acutely, it was, after all, a death penalty case and they were charged with determining Ma’s guilt or innocence. There was bad news for Ma, three of them had admitted to believing her guilty before hearing a word of testimony! When Ma got the news that the jurors had been selected she was asked if she thought she could get a fair trial. She didn’t think so, she said that there were too many people against her.

The trial testimony was as gut wrenching as the grand jury testimony had been. In particular, Luis Moya seemed to want to talk.  Moya said that he and Baldonando had been introduced to Mrs. Duncan through Mrs. Esperanza Esquivel, the operator of the Tropical Cafe in Santa Barbara. Equivel would act as the go-between.

“She (Elizabeth Duncan) told me she had acid, rope and sleeping pills if we decided we could use them. The pills were to be for an overdose, the rope to tie her and the acid to disfigure her (Olga Duncan) face and fingerprints”

The plan Moya and Baldonado came up with was to kidnap Olga and take some of her clothes to make it appear she’d gone on vacation. They were going to dispose of her near Tijuana.

Ma pawned a ring to give Moya $175 for expenses.

About the night of the murder, Moya said:

“I knocked on the door and asked if her husband was Frank Duncan. She said ‘Yes’. I said I had met him at a bar, and that he was pretty drunk and had a lot of money on him. I said I had him in the car and wondered if she would help be bring him up.”

She said ‘Sure, I’ll help you bring him up.’ When she opened the door of the car I hit her a blow over the head with the pistol to try to knock her out.

“It was a very hard blow, but I didn’t knock her out. Baldonado grabbed her and I shoved her into the car.”

Moya said he drove down to the Cabrillo Highway near the beach. Olga was still screaming and Baldonado was hitting her with the pistol.

“I stopped the car and told Baldonado to give me the pistol. I hit her a heavy blow on the head and she passed out. Baldonado taped her hands.

The car they’d rented from a friend for $25 wasn’t working well. They stopped twice before selecting Olga’s final resting place.

“It was a pretty good place to bury her. We didn’t think she would be found. We dragged her out of the car.”

When asked if Olga was still alive, Moya said that she was. Moya told the hushed courtroom that because he’d broken the gun over Olga’s head, they’d decided to strangle her. He said:

“We decided to strangle her until she was dead. We took turns strangling her and hit her with a rock.”

Baldanodo wasn’t nearly as loquacious as Moya — his testimony provided some corroboration  but primarily consisted of “I don’t recall” answers.

Ma’s friend, Emma Short, testified to overhearing threatening phone calls made by Ma to Olga. When she was asked about the relationship between Ma and Frank, Emma said that he often called his mother “doll” and she’d heard him promise many times “I’ll never leave you.”

While no one had mentioned incest directly, there were many oblique references to it in the questioning of witnesses about the relationship between mother and son. Short was asked about the sleeping arrangements in the two bedroom apartment shared by Frank and his mother before the marriage. She told the court:

“Mrs. Duncan’s bedroom could be seen from the living room. Frank was lying in her bed. She came out and said, ‘Isn’t he beautiful?'”

At last Ma took the stand. She testified that she had once plotted to tie up and kidnap Frank! She felt that if she got him away from Olga he’d snap to his senses; however, she continued to deny that she threatened Olga or ever intended to harm her.

The courtroom was thrown into an uproar when Ma’s past was exposed during cross-examination by the D.A.. She had been married about 16 times, and had failed to get an annulment or divorce for many of them. The D.A. also revealed that she had six children! Ma acknowledged 10 of the marriages, but she said she couldn’t recall any of the others.

When she was asked about her relationship with Frank, Ma said it was one of love and devotion. The D.A. asked if she loved Frank more that her other children, she replied: “Yes”. 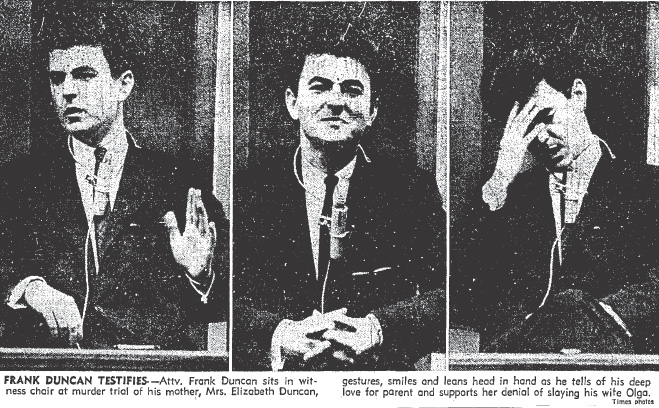 Next to take the stand was Frank Duncan. He testified that:

“I loved my mother and I love her still.”

He continued to support Elizabeth’s story throughout the trial.

One of the trial shockers came when Ma was asked by the D.A. if she had worked as a madam to put Frank through law school and she shouted “No!” The D.A. persisted in his questioning:

“Well, that was your occupation, wasn’t it?”

“I didn’t consider it an occupation. It was a position.” 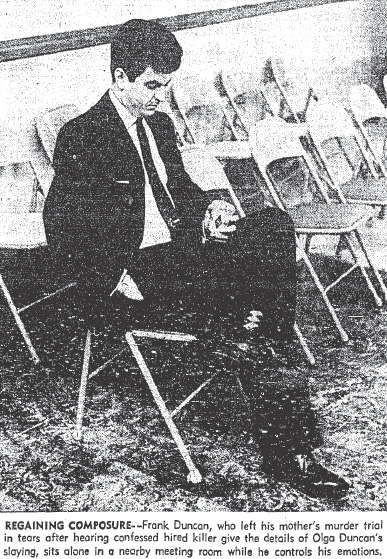 While Ma’s personality was revealed during the trial, it was difficult to get a handle on Frank — what he knew, when he knew it, and exactly what kind of man he was. He was in law school when Ma was running a brothel and he must have known what was going on. How did he feel about that? He never said. 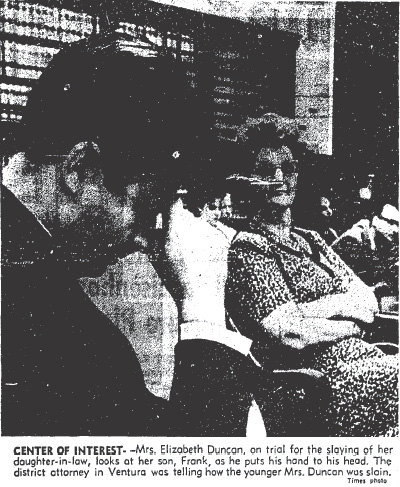 There were, however, a few tantalizing glimpses into Frank’s personality.

He became angry and actually rose to object when the D.A. taunted him by calling him “Frankie”. He left the courtroom in tears during Luis Moya’s testimony in  which he  recounted the details of Olga’s monstrous death.

Frank admitted that he’d dated a woman in San Francisco during a business trip while he was married to Olga. He didn’t bother to tell his date that he was married. Apparently Frank couldn’t be faithful even for the six month duration of his marriage to Olga. What was even more surprising was that Frank married again, secretly, during Ma’s trial! If there was one person in the case that was a cipher, it was undoubtedly Frank.

On March 16, 1959, after 4 hours and 51 minutes of deliberation, Ma was found guilty.   Moya and Baldonado were found guilty at their trials as well. All three were given the death penalty.

Frank fought for his mother until the end. In fact he wasn’t at her August 8, 1962 execution because he was in San Francisco at the Federal Court arguing her case.

Ma Duncan’s last recorded words were said to have been: “Where’s Frank? I want to see my son.”