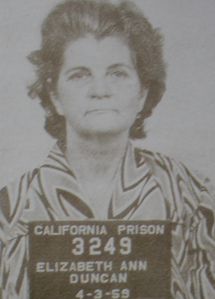 Two days later, on December 21st, the cops went public with an appeal to help them find Olga Duncan’s body. The public didn’t have to do a thing because Gus Baldanado confessed that same day and implicated Luis Moya and Elizabeth Duncan. He also led them to Olga’s body in Casitas Pass. Luis Moya would also confess to his part in the slaying. Ma, however, was adamant that she was not guilty. 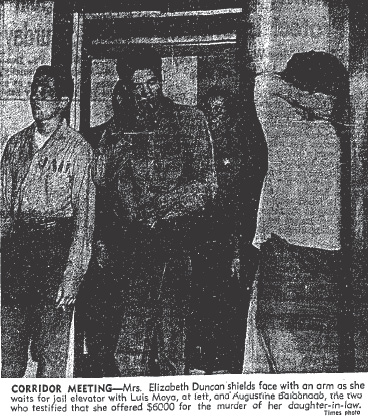 If Santa Claus had any presents for Frank Duncan he was going to have a tough time finding him because the attorney mysteriously vanished on Christmas Eve. District Attorney Roy Gustafson would have better luck with a subpoena requiring Frank to testify before the grand jury — Ma’s son was located in a Hollywood apartment.

According to testimony during the grand jury hearing, Ma had approached at least four people with various plans to kill Olga.

Mrs. Barbara Reed, a carhop at the Blue Onion Restauant in Santa Barbara, said she had been acquainted with Ma for at least ten years. She testified that in August 1958 Ma had asked her if she would “…put her (Olga) out of the way becasue she was interferring with Frank’s future”. Ma told Reed that she had plenty of acid and anything else that might be needed to deal with Olga. Ma wanted Reed to go to Olga’s apartment and throw acid in her face! Ma said that she’d hide behind Reed and as soon as Olga had a face full of acid she’d throw a blanket over the injured woman, drag her out to the car, drive her up to the mountains and push her over a cliff! Reed was offered $1500 for her trouble. 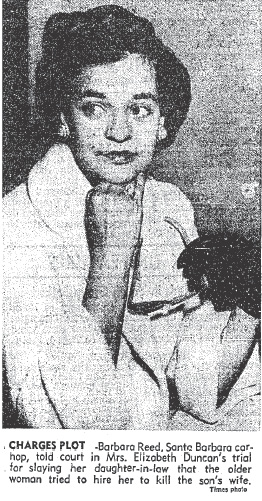 Barbara Reed said she realized that Ma had gone crazy and rather than cross her she told the older woman she’d think about the offer. Instead Reed phoned Frank the following day and asked him to meet her at the Blue Onion.

“The very next day I asked him to come out tot he Blue Onion. He came out and I said, ‘This is very important. It is sort of a real dangerous matter here.’ He said ‘Are you in trouble?’, and I told him what his mother had come up with and I said ‘You have got to do something about her, Frankie. This girl is in danger and I think your mother had gone crazy.’ He said, ‘You know it, too.’ I told him to do something with Olga, either get her out of town or take her some place where she would be safe. He said ‘I will do what I can.’ That is all he said.”

Ma had also discussed Olga with her close friend, eighty-four year old Emma Short. Short said that she had first heard of Olga Duncan after Elizabeth had taken an overdose of sleeping pills and was confined to Cottage Hospital. Short said that Elizabeth told her that after she’d recovered from the overdose Frank had promised he wouldn’t marry Olga.

But of course Frank married Olga in spite of his promise to his mother. Emma Short said that Elizabeth told her, “My son will never live with Olga. I will kill her first, destroy her.”

“…she (Elizabeth) asked me to go over to Olga’s apartment and try to get her to come to my apartment. When she got to my apartment, she would have her sit in a chair that goes against the closet. She (Elizabeth) would be in there. Then she would take a rope and put it around her neck and choke her and throw poison in her eyes.”

When asked if she had ever mentioned any of her conversations with Ma to Frank, Emma said:

“No, I never did. Mr. Duncan is a man that is very hard to approach and I had very little to say to him at any time.”

A woman named Diane Romero also came forward to testify to the grand jury about her conversations with Elizabeth Duncan regarding Olga. Romero had first met Elizabeth while Frank was defending her husband, Rudolph Romero, on a narcotics possession charge. 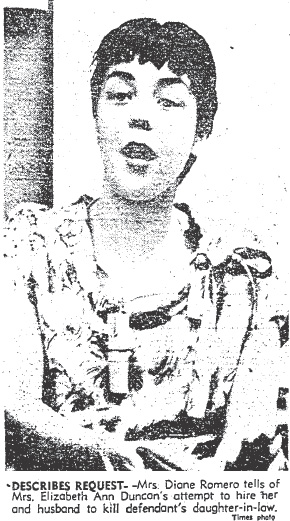 Diane said that Elizabeth Duncan had mentioned her hatred for Olga and how much she wanted to get rid of her. Diane’s testimony was a chilling account of the depth of Ma’s hatred for her daughter-in-law.

“…she (Elizabeth) gave me $5 one time to go buy some lye for her bathroom. I didn’t pay too much attention. After, when se did start talking about getting rid of Olga, she told me that she wanted the lye so that she could put Olga in the bathtub, put some water in the tub and pour lye over her so that you couldn’t recognize her, make her dissolve or something.”

Mrs. Romero and her husband, Rudolph, met with Elizabeth to discuss another of Ma’s plans for Olga. According to Diane, Elizabeth offered her husband money to get rid of Olga.

Just in case hiring an assassin didn’t pan out, Ma had a back-up plan. She made an appointment with a local doctor and tried to get the physician’s office manger, Mary Ann Dowhower, to go out with Frank.

“She (Elizabeth) would flash pictures of Frank and she wanted me to go out with him, to come home for dinner. She wanted me to become his girl friend and possibly his wife, since he was interested in someone and she didn’t know who and she didn’t want it to go any further than it had gone. I didn’t keep the appointment. She pushed me too much.”

Finally, Frank Duncan took the stand and his testimony was an uncomfortable peek into the dynamic between mother and son. He revealed that his mother didn’t want him to marry at all, ever. And while Frank’s memory seemed to be very good, it failed him at some crucial moments. When he was asked if his mother had raised any objections when he began dating Olga, he stated that he didn’t recall.

Frank went on to describe his living arrangement following his marriage to Olga. He said that he lived part of the time with his mother, and part of the time with Olga. After the newlyweds moved to the Garden Street apartments he said he went home to Elizabeth Duncan each night with few exceptions. When he was asked why he didn’t stay with Olga continuously, he said:

“Well, sir, my mother, when we first got married, used to call me a lot at the office and I understand she called my wife sometimes, and my wife and myself, we just had an understanding that I was to stay home until shortly before the baby arrived.”

Frank further testified that after he married Olga, Elizabeth purchased a gun and threatened to take her own life. He took the gun from her and she promised him she would return it to the pawn shop where she had bought it. As far as Frank knew, Ma had returned the little pearl-handled .22.

The horrific testimony given during the grand jury hearing resulted in the indictment of Elizabeth Duncan and her co-conspirators, Luis Moya and Gus Baldanado for the slaying of Ma’s pregnant daughter-in-law, Olga.

Ma did one of the only things she could do under the circumstances — she decided to enter a plea of insanity.

NEXT TIME: The trial and its aftermath.