Alfred Wells wasn’t a sympathetic defendant; and it seemed unlikely that his frequent and profane outbursts in court, aimed specifically at his half-sister Violet Wells the object of his sexual obsession, would earn him points with the jury. 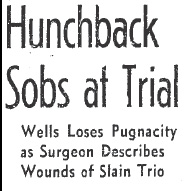 His demeanor completely changed from combative to uncontrollable sobbing when Dr. A.E. Gilbert, county autopsy surgeon, took the stand and began to describe in graphic detail the wounds that killed each of the three victims. Each one of the three had been shot in the back. As Dr. Gilbert testified, Alfred’s head fell forward and he wept. Was he weeping out of sympathy for the dead or the fact that his cowardice in shooting his victims in the back had been revealed in open court?

When Alfred was first arrested he claimed to have no recollection of the murders to which he later confessed. When he was called to testify he repudiated his confession. He explained that he had signed a confession but that, “I gave the Sheriff the kind of thing he wanted–cold turkey, with no holes to craw up in–but it was all phony baloney.” Yet the phony baloney confession fit the facts of the case perfectly.

Alfred’s fallback plan continued to be his convenient amnesia. He said that after Violet vanished he started drinking wine and smoking “loco weed” which left his mind a blank until he found himself in Nevada, a wanted man. Violet was so dumbfounded by Alfred’s testimony she nearly dropped her knitting. 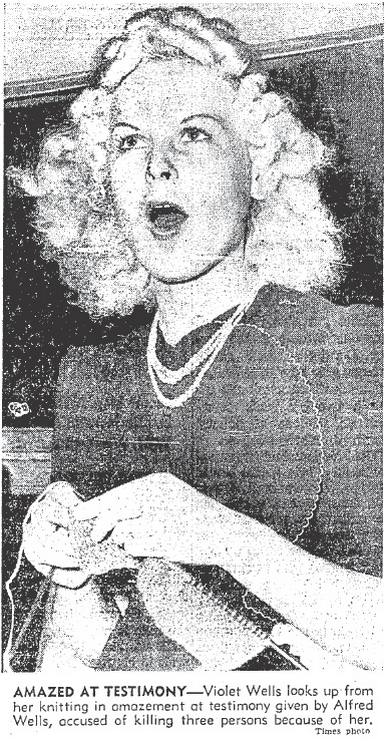 Once the testimony had concluded, Chief Deputy District Attorney John P. Knauf passionately argued for the death penalty. “This is so aggravated a crime–with the defendant callously holding a victim’s young baby in his arm while he shot her in the back–that the death penalty should be inflicted.”

The best Theodore G. Krumm, Alfred’s attorney, could do in rebuttal was to assert that while he believed that his client was guilty of the murders, he also believed that the defendant had no memory of what he had done.

The jury of of five women and seven men deliberated for a mere 30 minutes before finding Alfred Wells guilty on all counts. Upon hearing the verdict he fell back in his chair. But he didn’t stay there. He jumped to his feet and shouted, “I can’t get a fair trial from the doctors here, so I am willing to leave my fate up to the higher court and the doctors at San Quentin.” It was a dumb move among the many that had characterized Wells’ life thus far. His attorney withdrew the insanity plea–thus virtually assuring that his client would perish in the gas chamber.

Alfred’s attempt to make a statement was cut off by Judge Leonard. District Attorney Jerome Kavanaugh, however, was allowed to speak, “It is regrettable this defendant hasn’t three lives we could ask for. If he could be sent into the gas chamber three times it would not atone for these heartless crimes. His worthless carcass is not worth anything compared to the lives of his three innocent victims. When and if the defendant is led into the gas chamber, society will lose nothing.”

When reached for comment on the verdict Violet Wells said that she was relieved that Albert was going to pay for what he’d done. 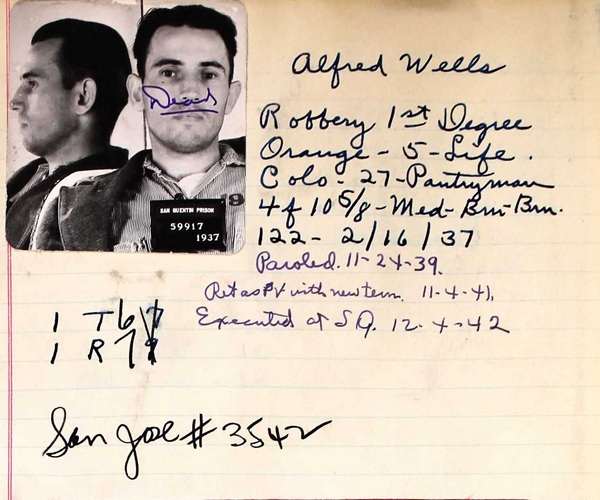 All appeals on Alfred’s behalf were denied and on December 3, 1942 he was one day away from his execution. When jailers informed him that there was little chance for a reprieve or commutation Alfred said, “It’s all right with me, I haven’t anything to live for.”