According to LAPD homicide detectives Jack McCreadie and S.W. Beckner, Charles Hart fit the profile of the Wilshire Prowler to a “T”.  But then it’s one thing to LOOK like the Prowler, but another thing entirely to BE the Prowler.

For days following Hart’s arrest detectives probed the suspect’s background and, importantly, his whereabouts for the murders of Karil Graham and Laura Lindsay.

Suddenly there was a break in the case–and it had nothing to do with Charles Hart. Police Technician A.R. McLaughlin worked diligently to find a match for a bloody palm print found at the scene of Laura Lindsay’s slaying. He painstakingly compared the bloody print against all the burglary suspects that had popped up since Laura’s murder until he found a match. The suspect was no stranger to law enforcement, he was two-time loser and confessed burglar Donald Keith Bashor.

The hunt for Bashor was on. The twenty-seven year-old man was discovered by LAPD officers and detectives as he prowled the alley between two apartment buildings at 325 and 337 South Occidental Boulevard.

The suspect was wearing gloves but he was in his bare feet, which was a lucky break for the cops. Bashor ran and it looked like he was going to escape but then he leaped on a pile of lumber and stepped on a nail.

Once he was in custody, Bashor was confronted by Chief of Detectives Thad Brown about the Lindsay murder. He denied having anything to do with it and refused to submit to a lie detector test. 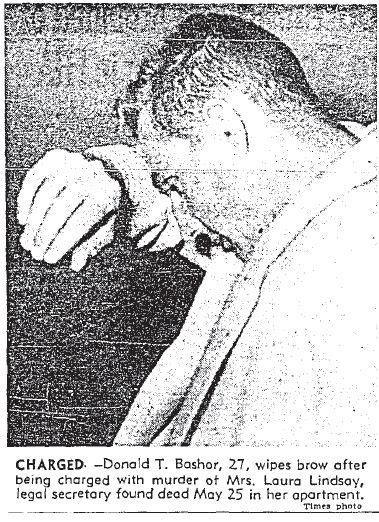 Bashor could refuse the lie detector test but the palm print was damning. Ironically, it was Officer McLaughlin who had been Bashor’s nemesis in 1949 when he was sent up the first time on a burglarly conviction.

Still denying the Lindsay murder, Bashor copped to nine burglaries in the neighborhood where he was captured. Thad Brown believed the burglary confession and he also believed that Bashor was a killer times two. He liked him for both the Karil Graham and Laura Lindsay bludgeon murders.

When detectives dug into Bashor’s records they found that he was in prison, working as a trusty at Harbor General Hospital on March 9, 1950, when he escaped and fled to Oregon.

He was captured in Portland the following July and confessed to numerous burglaries in the area. Bashor was sent to Oregon State Prison where he was confined for a year. When he had finished his time he wasn’t free, he was returned to San Quentin as an escapee. He was paroled in 1953.

When questioned about his recent activities, Bashor said that he had been working as a painter on and off between burglaries. He kept up his denials about the homicides for a number of hours. Finally he broke down and wept, and confessed to killing Karil Graham and Laura Lindsay. 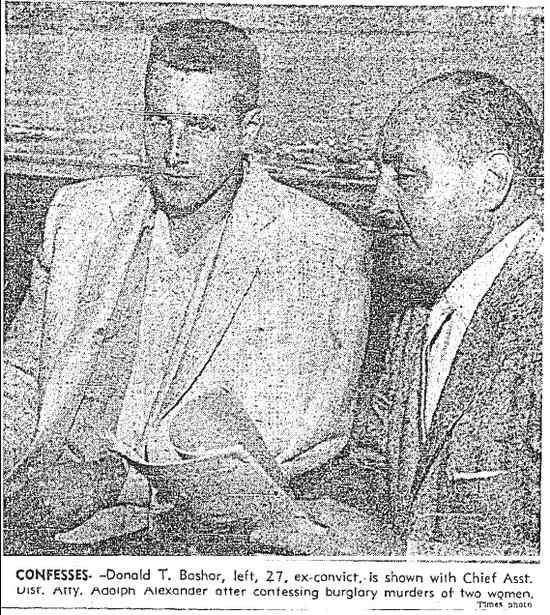 According to Bashor he entered the residences of the women intending only to steal, but then why was he armed with an 18-inch length of lead pipe when he broke into Karil’s apartment? Bashor said that he had been ransacking the place when Karil awakened and began to scream. He hit her on the head and he continued to beat her until she went still. He didn’t bolt and run after the murder, he stayed and searched until he found Karil’s purse. He found $20. The next day he took the weapon and his bloody clothing and dropped it off the pier at Ocean Park.

More than nine months passed before Bashor hit the streets again, this time he was armed with a ball-peen hammer. Laura Lindsay’s murder was nearly identical to Karil Graham’s. Again he beat the victim until she fell and died. He said that he saw a llight fall across Laura’s nude body and the sight of the blood bothered him. He found a shawl and placed it over her.

In the dark, with Laura’s body nearby, Bashor searched her home until he found her purse. He walked away with another $20.

The next day he wrapped the hammer in his bloodied shirt and tossed the bundle over the pier at Ocean Park.

While he was in a confessing mood, Bashor also admitted to 40 burglaries in the L.A. area since his parole in 1953. Had he committed any other murders?

NEXT TIME: Donald Bashor’s crimes and his punishment.