For eighteen months a mystery assailant had been terrorizing women in L.A. The man, described as blonde, medium build and about 26-years-old, had killed Karil Graham in her apartment in January 1956 and he was a suspect in several other violent attacks on women.

On May 25, 1956 the Los Angeles Times reported that there had been another murder the night before. The circumstances were very similar to Karil Graham’s slaying and it was in the same general neighborhood. The victim was Laura Lindsay, a 62-year-old legal secretary. Her home at 2536 West 5th Street was in the MacArthur Park district.

According to Captain Robert Lohrman of LAPDs homicide detail Lindsay’s killer had crawled through a 3’x3′ wood box which lead into the living room of the home. Laura was in her underwear when she was confronted by her killer. The assailant struck her repeatedly over the head with a hammer or similar blunt instrument. Laura got to her feet and staggered to the living room sofa where she fell face down and never got up again.

The Coroner’s chief autopsy surgeon, Dr. Frederick D. Newbarr, said that Laura had been struck multiple times on the right side of her head and that the woulds were “extensive and deep.”

The killer emptied Laura’s purse and jewelry box onto the bedroom floor. He went into Laura’s bathroom and washed her blood from his hands, wiped them on a towel, and threw the towel on the floor. He brazenly left through the front door.

Irving M. Walker, an attorney and Laura’s boss for 30 years, stopped by her house at 8:45 a.m. on Thursday, May 24. Walker had left his home at 400 South Norton Avenue and was on his way to his office in the Van Nuys Building downtown. He stopped at Laura’s because he often drove her to work. He found the wood box open and the front door ajar. Walker said “I called Mrs. Lindsay at the door. When she did not answer I entered the front room and called her again. Then I found her lying face down on the couch.” He saw that Laura’s head was covered with blood and that the room was in complete disarray. Walker said, “I placed my hand on her shoulder and knew she was dead.” 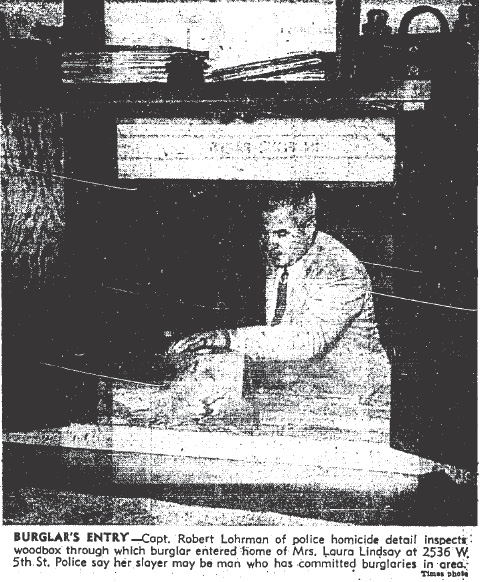 After discovering Laura’s body he went next door to the home of Mr. and Mrs. Peter Negrete. Mr. Negrete accompanied Walker back to Laura’s apartment while Mrs. Negrete phoned the police.

Was it a coincidence that Laura’s home had been burglarized just a few days prior to her murder on Sunday May 20th? Police aren’t big fans of coincidence. They thought it was likely that the earlier break-in was committed by the same man who murdered Laura. 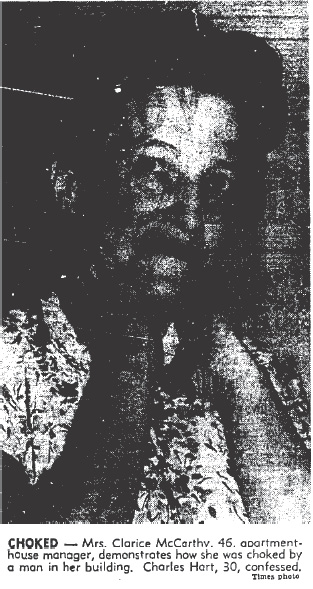 Ironically, the last person to see Laura alive was Detective Joseph Oaks. He had been to her apartment on May 23rd to interview her about the burglary. He said “She expressed concern about prowlers in the neighborhood and the fact that she lived by herself.” Walker had seen Laura earlier on Wednesday night when he brought her home from work. He said, “At the time we discussed the Sunday burglary and I told her that another incident like it might not happen in 15 or even 50 years. But we both agreed that inside locks should be placed on the wood box immediately.” Laura never had the opportunity to burglar proof her home before she was attacked and killed.

On May 31st, Clarice McCarthy was returning from the bank to the apartment building at 257 South Kenmore Street that she managed with her husband. She found a blonde man standing in the hallway outside her door. He told her he was there in answer to an ad for an apartment to rent.

Clarice took the man to apartment 310 and as soon as they were inside he grabbed her and began to choke her. Clarice fought with him and he pulled out a sharp linoleum knife and cut her several times on her hands. During the struggle the man lost control of his weapon and then fled. One of the strangest things about the attack was that Clarice’s assailant never uttered a word.

LAPD Motorcycle Officer Robert Knight found the suspect in the vicinity of Clarice’s apartment shortly after the attack. Detectives Jack McCreadie and S.W. Beckner of the central homicide squad said that the attacker, identified as 30-year-old Charles Hart of 2176 West 27th Street, fit the description of the Wilshire Prowler to a “T”.

It appeared that the police finally had the Prowler in custody.