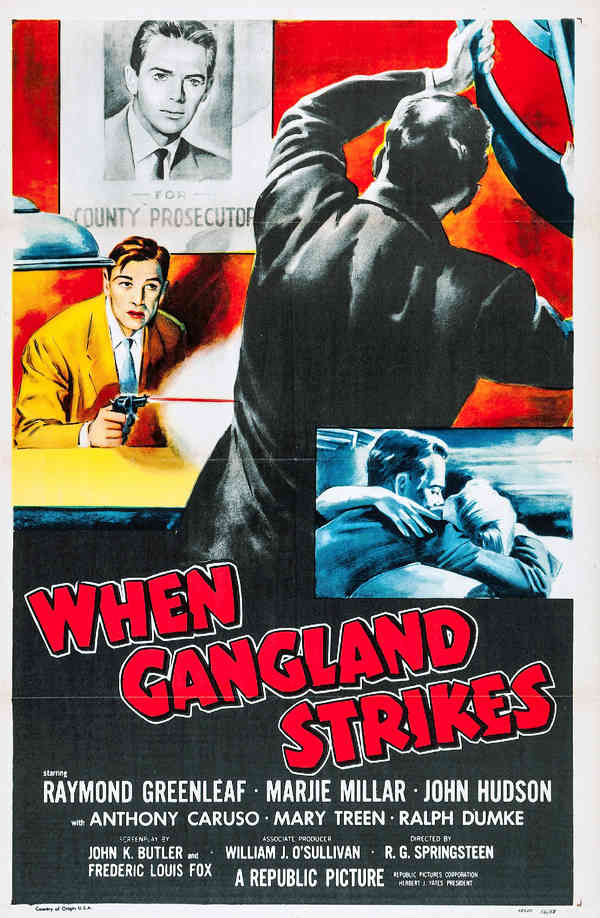 Welcome! The lobby of the Deranged L.A. Crimes theater is open. Grab a bucket of popcorn, some Milk Duds and a Coke and find a seat. Tonight’s feature is WHEN GANGLAND STRIKES starring Raymond Greenleaf, Marjie Millar and John Hudson.

Gangster Duke Martella, accompanied by his lawyer, Leo Fansler, goes to pick up his girl friend, Hazel Worley, upon her release after serving a one-year prison sentence. Martella is accused of killing a key witness in the district attorney’s murder case against him and worries about his upcoming trial. On the ride to town, Hazel explains that she promised her recently deceased cellmate that she would deliver a letter to a man named Luke Ellis, who lives in the sleepy town of Lawndale. In Lawndale, meanwhile, Luke, the county prosecutor who believes “in squeezing human understanding into the law,” reluctantly cross-examines Jerry Ames, a young Korean War veteran who has been accused of stealing $27.50 from his employer, Walter Pritchard, the owner of the local hardware store. When Luke argues that Jerry only borrowed the money to buy his wife an anniversary present, the jury finds him innocent and the courtroom erupts in applause, much to the chagrin of Pritchard, who believes that Luke is far too lenient to be a prosecutor.