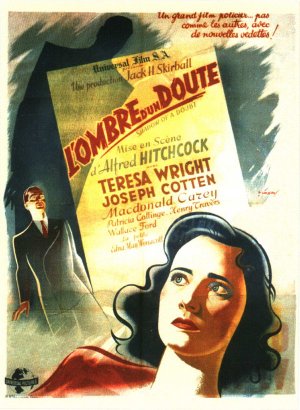 The script was a collaboration between Thornton Wilder, Sally Benson and Alma Reville (Hitchcock’s wife).  This was Hitchcock’s favorite of his films.

Before the feature, enjoy this short subject from the CRIME DOES NOT PAY series. 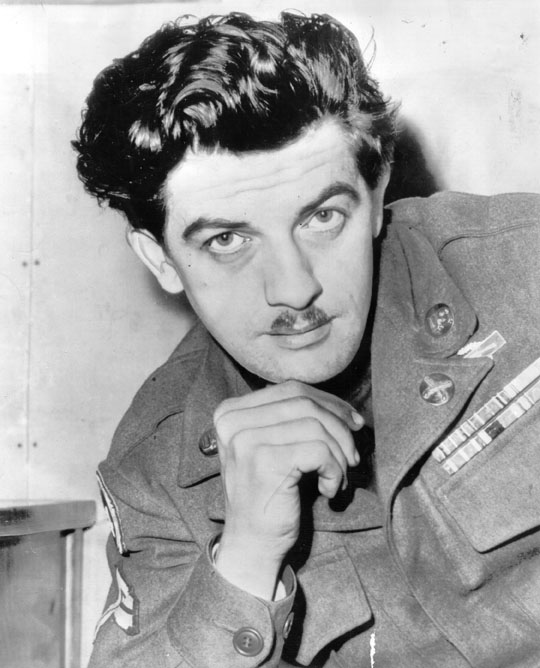 On February 8, 1947 the Herald announced that the Black Dahlia case was solved. They had found the killer!

Dumais, a combat veteran, returned from leave wearing blood stained trousers with his pockets crammed full of clippings about Short’s murder. According to the Herald, Dumais made a 50 page confession in which he claimed to have had a mental blackout after dating Elizabeth Short in Los Angeles five days before her body was found.

The good looking corporal seemed like the real deal. He told the cops, “When I get drunk I get pretty rough with women.” Unfortunately, when police checked his story against known facts the solider’s confession didn’t hold up. Dumais was sent to a psychiatrist.

The victim of the “Werewolf Killer” was forty-five year old Jeanne French. Her nude body was discovered at 8 a.m. on February 10, 1947 near Grand View Avenue and Indianapolis Street in West L.A. 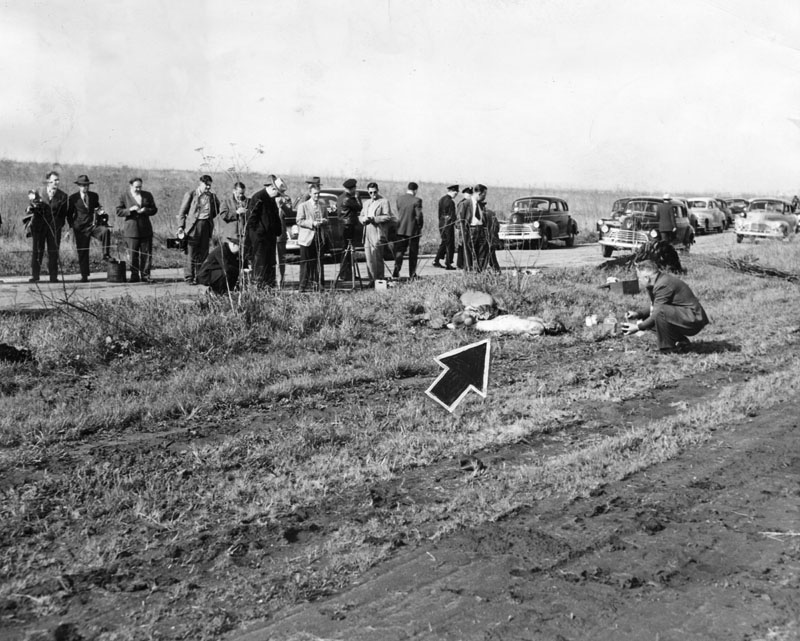 Jeanne Thomas French’s life was as fascinating as a Hollywood screenplay. She was an aviatrix, a pioneer airline hostess, a movie bit player and an Army Nurse. And at one time she was the wife of a Texas oilman. The way she died was monstrous. 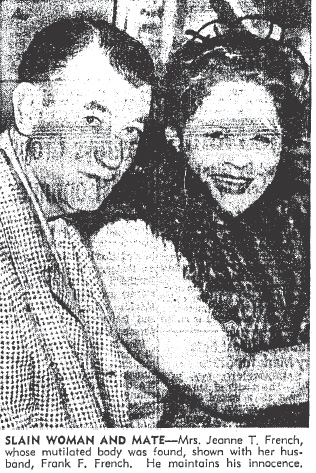 A construction worker H.C. Shelby was walking to work around 8 o’clock that morning along Grand View Blvd. when he saw a small pile of woman’s clothing in weeds a few feet from the sidewalk. Curious, Shelby walked over and lifted up a fur trimmed coat and discovered French’s nude body.

French was savagely beaten–her  body covered with bruises. She suffered blows to her head, probably administered by a metal blunt instrument–maybe a socket wrench. As bad as they were, the blows to her head were not fatal. Jeanne died from hemorrhage and shock due to fractured ribs and multiple injuries caused by stomping–there were heel prints on her chest. It took a long time for French to die. The coroner said that she slowly bled to death.

Mercifully, Jeanne was unconscious after the first blows to her head so she never saw her killer take the deep red lipstick from her purse, and she didn’t feel the pressure of his improvised pen as he wrote on her torso: “Fuck You, B.D.” (later thought to be be “P.D.”) and “Tex”.

French was last seen in the Pan American Bar at 11155 West Washington Place. She was seated at the first stool nearest the entrance and the bartender later told cops that a smallish man with a dark complexion was seated next to her. The bartender assumed they were a couple because he saw them leave together at closing time.

Jeanne’s estranged husband, Frank, was booked on suspicion of murder. The night before she died Jeanne visited Frank at his apartment and they’d quarreled. Frank said Jeanne had started the fight, then hit him with her purse and left. He said that was the last time he saw her. He told the cops she’d been drinking.

David Wrather, Jeanne’s twenty-five year old son from a previous marriage was also brought in for questioning. As he was leaving the police station he saw his step-father for the first time since he’d learned of his mother’s death. David confronted Frank and said: “Well, I’ve told them the truth. If you’re guilty, there’s a God in heaven who will take care of you.” Frank didn’t hesitate, he looked at David and said: “I swear to God I didn’t kill her.” 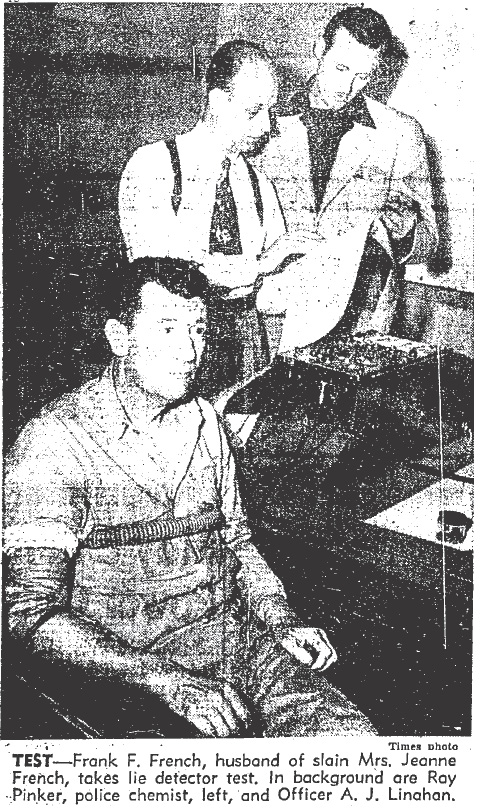 Frank was cleared when his landlady testified he was in his apartment at the time of the murder, and when his shoe prints didn’t match those found at the scene of the crime.

Cops followed the few leads they had. French’s cut-down 1929 Ford roadster was found in the parking lot of a drive-in restaurant, The Piccadilly at Washington Pl. and Sepulveda Blvd. Witnesses said that the car had been there since 3:15 the morning of the murder, and a night watchman said it was left there by a man. The police were never able to find out where Jeanne had been between 3:15 a.m. and the time of her death which was estimated at 6 a.m.

Scores of sex degenerates were rousted, but each was eliminated as a suspect. Officers also checked out local Chinese restaurants after the autopsy revealed that French had eaten Chinese food shortly before her death.

Three years later, following a Grand Jury investigation into the numerous unsolved murders of women in L.A., investigators from the D.A.’s office were assigned to look into the case.

Frank Jemison and Walter Morgan worked the French case for almost eight months, but they were never able to close it. They came up with one hot suspect, a painter who worked for the French’s four months prior to the murder. He admitted to dating Jeanne several times. The cops discovered the painter burned several pairs of his shoes–he wore the same size as the ones that left marks on Jeanne’s body. Despite his odd behavior, the painter was cleared.

There were so many unsolved murders of women in the 1940s that in 1949 a Grand Jury investigation was launched into the failure of the police to solve the cases.

There haven’t been any leads in Jeanne French’s case in decades; however, there is always a detective assigned to Elizabeth Short’s murder case.  A couple of years ago it was a female detective and, surprisingly, she received several calls a month. To this day there are people who want to confess to Elizabeth Short’s murder. The detective was able to eliminate each one of the possible suspects with a simple question: “What year were you born?

Elizabeth Short’s murder dominated the front pages of the Evening Herald & Express for days following the discovery of her body.

Even in a murder case as well-publicized as the Black Dahlia, the more time that elapses following the crime the fewer clues there are on which to report. The fact that the case was going cold didn’t dampen the Herald’s enthusiastic coverage. The paper sought out psychiatrists psychologists, and mystery writers who would attempt, each in his/her own way, to analyze the case and fill column space in the paper as they, and the cops, waited for a break. Decades before the FBI’s Behavioral Analysis Unit (BAU) was founded the shrinks and writers whose work appeared in the Herald were engaging in speculative profiles of both the victim and her killer.

One of the psychologists tapped by the Herald to contribute her analysis of the victim and slayer was Alice La Vere. La Vere was introduced as “…one of the nation’s most noted consulting psychologists”. According to the newspaper, Miss La Vere would give to readers: “an analysis of the motives which led to the torture murder of beautiful 22-year-old Elizabeth Short”. La Vere’s analysis is surprisingly contemporary.

Here is an excerpt from her profile of Short’s personality:

“Some gnawing feeling of inadequacy was eating at the mind of this girl. She needed constant proof to herself that she was important to someone and demonstrates this need by the number of suitors and admirers with which she surrounded herself.”

La Vere went on to describe the killer:

“It is very likely that this is the first time this boy has committed any crime. It is also likely that he may be a maladjusted veteran. The lack of social responsibility experienced by soldiers, their conversational obsession with sex, their nerves keyed to battle pitch — these factors are crime-breeding.” She further stated: “Repression of the sex impulse accompanied by environmental maladjustment is the slayer’s probable background.”

How does La Vere’s profile of Elizabeth Short and her killer compare with the analysis by retired FBI profiler John Douglas? Douglas suggests that Beth was “needy” and that her killer would have “spotted her a mile away”. He said that the killer “would have been a lust killer and loved hurting people.”

On the salient points, I’d say that La Vere and Douglas were of like minds regarding Elizabeth Short and her killer.

At the time of Elizabeth Short’s murder, mystery writer Craig Rice (pseudonym of Georgiana Ann Randolph Walker Craig) was one of the most popular crime writers in the country. In its January 28, 1946 issue,TIME magazine selected Rice for a cover feature on the mystery genre. Sadly, Rice has been largely forgotten by all except the most avid mystery geeks (like me).

In late January 1947, Craig Rice was invited by the Herald to give her take on the Black Dahlia case. She summed it up this way:

“A black dahlia is what expert gardeners call ‘an impossibility’ of nature. Perhaps that is why lovely, tragic Elizabeth Short was tortured, murdered and mutilated Because such a crime could happen only in the half-world in which she lived. A world of–shadows.”

The police couldn’t catch a break. Not only were they stumped in the Dahlia case, another woman was viciously murdered on February 11th. The victim was not cut in half, but evidence at the scene suggested a possible connection.

NEXT TIME: The Lipstick Murder

Years after a murder drove them apart, an heiress tries to win back her lost love