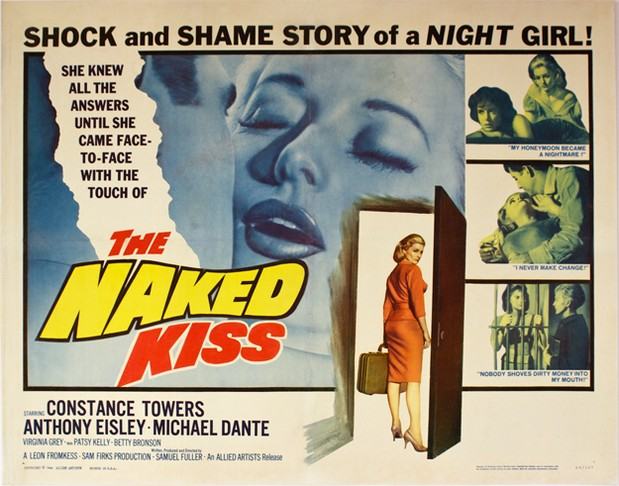 Welcome! The lobby of the Deranged L.A. Crimes theater is open! Grab a bucket of popcorn, some Milk Duds and a Coke and find a seat. Tonight’s feature is THE NAKED KISS  directed by Sam Fuller who also directed such gems as: Pick-Up on South Street, The Crimson Kimono, and Underworld U.S.A.  The film stars Constance Towers, Anthony Eisley, and Michael Dante.  You’ll never forget the opening scene! Enjoy the film!

Kelly, a prostitute, leaves town after a fight with her procurer and takes the money he owes her. She comes to the small town of Grantville, where her first customer is Griff, the police chief, who advises her to avoid arrest by going to work for Candy’s bordello across the state line. Instead, Kelly remains in town and takes a job as nurse’s aid at a hospital, where she soon establishes a close rapport with the children in her ward. Griff discovers that she is still in town, and although he does not believe that she desires to reform, he reluctantly agrees to give her a chance.