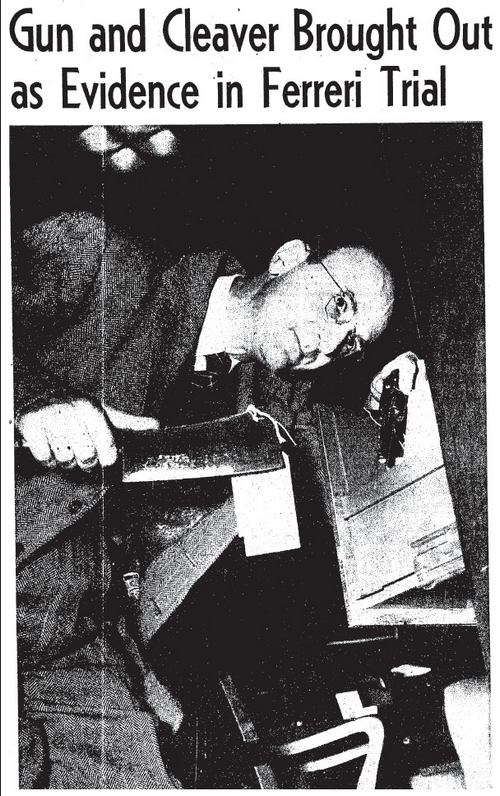 The findings in Jerry Ferreri’s inquest resulted in the arraignment of his widow, Betty, and one of their roomers, Allan Adron, a handyman, for murder. Allan was charged with firing two bullets into Jerry’s body, after which Mrs. Ferreri allegedly struck her husband 23 times about the head with a meat cleaver.

As evidence against the two defendants mounted a new twist in the case took everyone by surprise. Vincent D’Angelo, Jerry’s second cousin, and referred to in some of the newspaper coverage as “the dapper decorator” (he was a house painter), revealed that he was actually Charles Fauci. Why the alias? Well, Fauci was wanted in New York for grand larceny. and fake registration of a motor vehicle. 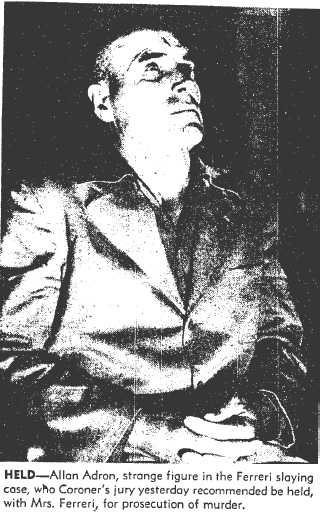 D’Angelo, nee Fauci, told the cops that Betty hadn’t given a gun to Allan as she had originally stated. It was he who had loaded the gun and hidden it in his pocket up to a few seconds before it was used by Allan to shoot Jerry.

He said that he and Val Graham, another of the Ferreri’s roomers, were leaving the house to go out for coffee when they heard Betty scream. Fauci told investigators he had the gun because Jerry had attacked Betty with a fireplace poker earlier that evening and he feared more violence. Fauci drew his gun and tried to enter the house but the doors were locked. He ran to the window of Allan’s room and shouted:

Allan opened the door and then, according to Fauci, the handyman snatched the gun from him and rushed back into the house locking the door behind him. When Allan arrived at the butler’s pantry he saw Jerry grappling with Betty, so he fired.

Under interrogation Fauci broke down and confessed to having wiped his fingerprints off the weapon when he returned to the house, and then later taking a drive out to Long Beach where he dropped the gun, holster and a box of unused cartridges for the .38 caliber revolver into the ocean.

Fauci made a point of telling the cops that if someone had not “taken care” of Ferreri, the playboy would have murdered his wife the night of October 26th.

Following his statement, the D.A. decided that Fauci should join Betty and Allan at the defendant’s table. 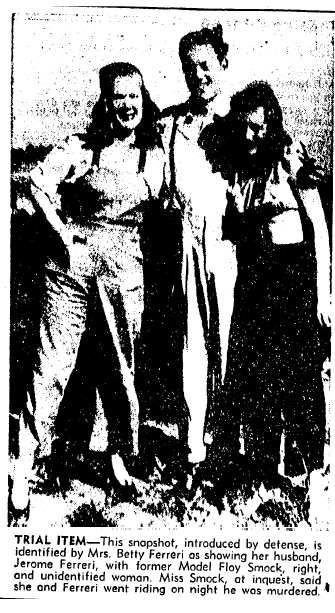 Meanwhile, cops were asking questions about Fauci’s alias: Who is Vincent D’Angelo? Where is he? Was he alive or dead? Did he ever exist? Fauci maintained that he and the real Vincent D’Angelo had driven to L.A. from New York. Once they arrived in the city, Fauci said that D’Angelo “turned the car over to me to use.”

But that story fell apart when the car was found in a local garage after the attendant recognized Fauci’s newspaper photos and identified him as the man he knew as D’Angelo. The cops wired New York for Fauci’s complete criminal record, and they wanted all information available on Vincent D’Angelo (provided he was real) and on the car.

Police attention was briefly diverted to what turned out to be a red herring in the form of a telegram. Supposedly Ferreri had been the recipient of a cryptic Western Union wire that bore the message: “The roses will bloom in December.” Huh? According to New York detectives, Ferreri had once collected $100 for dropping a dime on a member of the infamous Murder, Inc. hit squad. It was an interesting, but utterly worthless, piece of information given the fact that Ferreri’s wife and handyman were found in the butler’s pantry with the dead man, a smoking gun and a bloody meat cleaver. Ferreri’s murder was definitely not a mafia rub out. 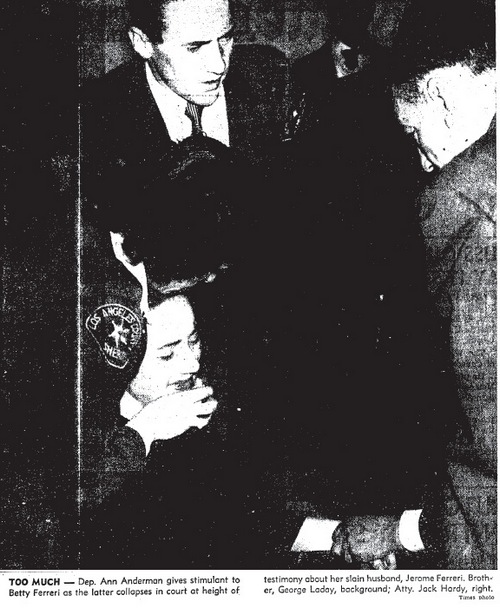 But just because the mob didn’t get to Jerry first didn’t mean they wouldn’t have been thrilled to hear that he was dead; in fact someone (a mob enforcer?) may have planted a bomb in his car in an attempt to send him a message about an unpaid gambling debt.. About six weeks prior to his murder, late on the evening of August 31, 1948, Jerry reported that his car, a 1946 maroon Lincoln, had been stolen from in front of his house. Just a few hours later a muffled explosion was heard and the gutted car was found parked in front of 325 South Arden Blvd, a block from Jerry’s home. The Lincoln’s paint was blistered, its interior was ruined by flames and the rear section of the roof had started to cave in.

The dead man seemed to have had a life complicated by an uncontrollable rage, multiple girlfriends, a wife he no longer loved, and a gambling problem; but when the law pared it down to the essentials it was still all about the three defendants in the case–jointly charged with murder. 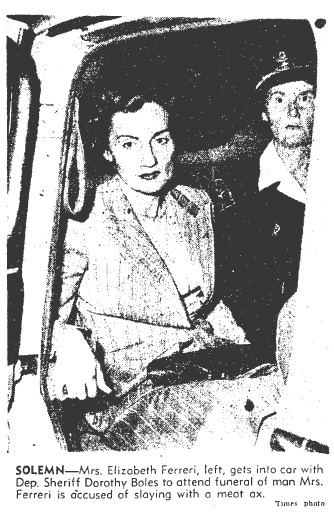 Betty was released from jail by court order to attend Jerry’s funeral, and the gray Sheriff’s car in which she rode stood apart from the black autos that formed the funeral cortege. The procession wound from the mortuary on the Sunset Strip to Holy Cross Cemetery. Betty sobbed as she stood by the freshly dug grave.

Betty’s father and brother arrived from the east coast to support her during the trial. Jerry’s family had also traveled from the east, but not to stand by Betty’s side–they were attempting to take possession of the Lucerne Blvd home and, incidentally, gain custody of her young son, Vincent.

By the end of November at least the cops had answers to some of their questions regarding Vincent D’Angelo. He was was a real person, not a figment of Fauci’s imagination, and he was discovered at his Brooklyn home.  He had reported that his car had been stolen, not loaned. Oh, and he was Fauci’s cousin! Blood isn’t always thicker than water and D’Angelo had a lot to tell the police about his shady relative.

He said that “no one in the family wants Fauci around.” The family? That may not have been quite as sinister as it sounded. It is possible that D’Angelo was referring only to his immediate family and not a larger criminal enterprise.

Betty was escorted by Deputy Marjorie Kellogg to her preliminary hearing, and as she entered the courtroom two of Jerry’s “friends”, Lorretta Burge and Floy Smock, glared daggers (or should that be cleavers) at her. Wow, you’d think that the two extremely attractive women would have had more pride than that.

Later in the day Betty was accosted by Loretta as she was escorted to the ladies’ room. Loretta muttered a derogatory statement to which Betty took umbrage; she was led away before the encounter came to blows. 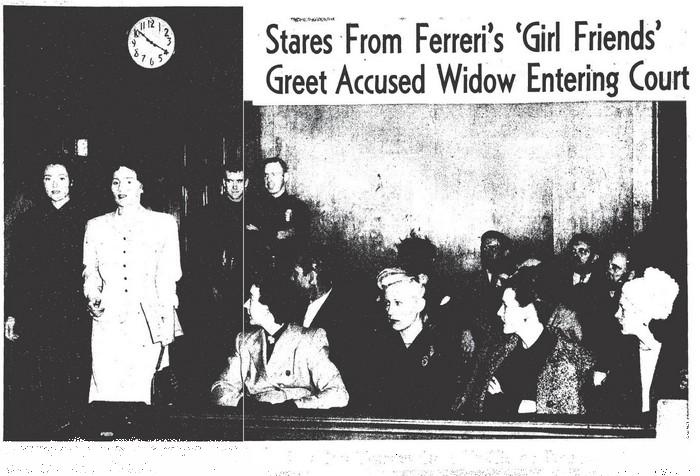 Then poor Val Graham learned that he was to be the prosecution’s star witness, even though it was obvious that his heart was with the defendants. They didn’t hold it against him though, Betty planted a kiss on his cheek as she left the courtroom.

Betty entered a plea of not guilty by reason of insanity, and her co-defendants followed suit. Trial was set for February 1, 1949.

Handyman Allan Adron stunned the trial watchers by withdrawing his plea of not guilty and entering a plea of guilty. He would be tried separately. Upon Allan’s change in plea Betty’s attorney immediately sought to have the man declared insane and incompetent to testify; however, Judge Fricke denied the motion.

In large part, Betty’s fate would hinge on whether her use of the cleaver was altogether in self-defense or whether she used it in a felonious assault on Jerry after he had fallen to the ground from the bullet wounds he had sustained.

In order to make her case for self-defense Betty was compelled to testify to the abuse she had suffered for years at Jerry’s hands. She frequently wept as she recounted the physical and mental torment she had endured. Jerry beat her often and he humiliated her by allowing her to discover him in bed with other women. Betty said she would occasionally find dainty undergarments, not her own, in their shared bedroom and Jerry would just laugh at her. Many times Jerry told Betty that if she really cared for him she would prostitute herself.

A few days into her trial Betty became so upset under cross-examination that she fainted and had to be taken out to the hallway of the courthouse to be revived. It was reliving some of Jerry’s abuses that had caused her so much distress. Back on the stand she testified not only to her own experiences with her husband, but to some of the horrendous stories she’d heard from friends about Jerry’s sadism.

She told the jury of five women and seven men:

“They said he used to string up dogs in the cellar and beat their brains out with a baseball bat. Then he would put them in a burlap bag and put them out at the front of his house.”

There was a neighbor that had a goat. He cut the heart out of the goat and took it home to his mother to she how she would act.”

Jerry’s behavior as an adult, and particularly toward Betty, worsened–she described the nightmare of their life together:

“He was out most of the night and slept all day. Sometimes he would lock me in a closet and tell me to stay there. He would gag me. He would threaten to kill me and the baby even before the baby was born. He wished the baby would be dead all the time.” He would bring a girl up and I would hear them. He would tell me not to make a sound or he would beat my face. Then he would come back and expect me to feed him. To cook for him.”

Jerry beat his wife even on the morning before she went to the hospital to give birth to their son, Vincent:

“I put on a coat and went down to a cab. I told the cab driver to take me to a hospital, I was going to have a baby. He told me to get in. He said he’d take me but ‘don’t have the baby in the cab’.” 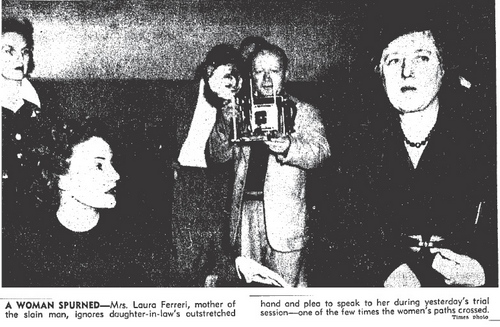 Laura Ferreri, Jerry’s mother, testified for the prosecution and it was obvious that she was attempting to repair her son’s tarnished image. She spoke of Betty in the bitterest of terms, saying that her daughter-in-law had once said that if she couldn’t have Jerry, nobody could.

Frankly, I wonder why ANYONE would have wanted Jerry.

On March 19, 1949 the jury acquitted Betty and her co-defendant Vincent Charles Fauci. Fauci had other charges pending both in L.A. and back east–but at least he’d beaten the murder rap. Betty was free to go.

The verdict hadn’t been a foregone conclusion–the foreman told reporters that the jurors started out 9 to 3 for acquittal. He said that by discussing the evidence the dissenters eventually came around.

Even though her in-laws had waged a fierce battle to take her son from her, Betty regained custody of Vincent following her acquittal–but she lost the house which was sold at auction.

As for the gun wielding handyman, Allan Adron, the Los Angeles Times didn’t report his fate, but it seems likely that since his original co-defendants were acquitted he would also be set free.

As for her life after the trail, Betty must have been an optimist because less than six months following her acquittal she remarried. The couple was married in the Wee Kirk o’ the Heather Chapel, Las Vegas. Her new husband was twenty-eight year old Jean Paul Roussos, the maitre de hotel at a local nightclub.

No word on how that union turned out.