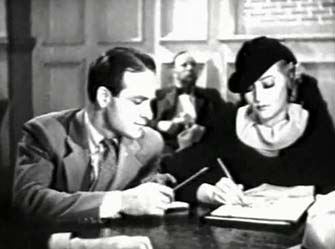 Welcome! The lobby of the Deranged L.A. Crimes theater is open! Grab a bucket of popcorn, some Milk Duds and a Coke and find a seat. Tonight’s feature is CIRCUMSTANTIAL EVIDENCE starring Chick Chandler and Shirley Grey.

In California circumstantial evidence is often used to arrive at a guilty verdict. Here is a definition:

“After attending the murder trial of a man who is sentenced to death on evidence that is purely circumstantial, newspaper reporter Jim Baldwin decides to write an exposé hoping to put an end to capital punishment based solely on circumstantial evidence. With his fiancée, Adrienne Grey, a court artist, Jim pays a visit to the paper’s wealthy and eccentric gossip columnist, Fred Stevens, and the two men concoct a plan that will forcefully demonstrate how misleading circumstantial evidence can be.”