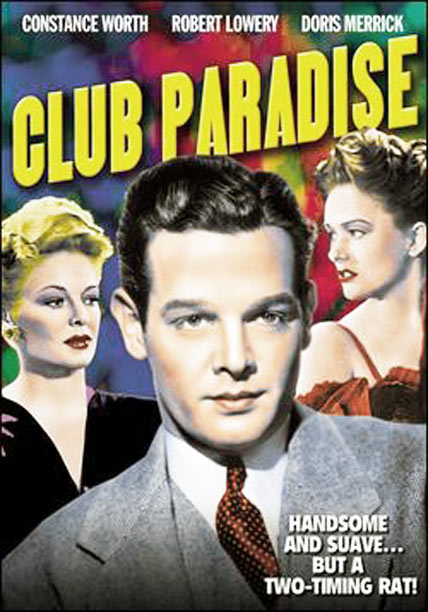 Welcome! The lobby of the Deranged L.A. Crimes theater is open! Grab a bucket of popcorn, some Milk Duds and a Coke and find a seat. Tonight’s feature is CLUB PARADISE (aka Sensation Hunters).  The film stars Constance Worth, Robert Lowery, Doris Merrick.

Unable to bear another night of endless bickering among her family members, factory worker Julie Rogers storms out of her parents’ house and takes her friend Helen to the Black Cat nightclub, which is owned by Julie’s trumpet-playing sweetheart, Ray Lawson. There, Julie meets Danny Burke, a handsome but mysterious idler and, bored with Ray, immediately falls in love with him. Julie goes home later that night and is further repulsed by the behavior of her brother Fred, who is drunk and belligerent. Returning to the Black Cat, Julie once again finds Danny and accompanies him to the infamous Paradise Club. Julie’s father disapproves of Danny and tries to convince her to date Ray, until the day Ray and Julie are arrested in a gambling house raid.