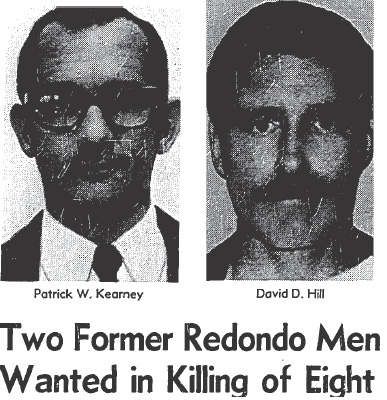 In late June 1977, Sheriff’s officers announced that they were seeking Patrick W. Kearney, 38, and David D. Hill, 34, formerly of Redondo Beach, as suspects in the sex murders of 8 young men. Investigators said that they had found evidence near the body of John Otis LaMay that lead them to issue warrants for the two men–but they wouldn’t reveal what it was they had found.

The victims tentatively linked to the wanted men ranged in age from 12 to 24–none were as young as 5-year-old Ronnie Dean Smith, who had been dead for nearly 3 years. Maybe the detectives were mistaken in their earlier hunch that the boy’s slaying was connected to the others.

Newspapers printed photos of the wanted men and, because it was a different time, frequently referred to them as “admitted homosexuals”. Along with photos and physical descriptions of the fugitives some details of the crimes were revealed. All eight victims had been nude when discovered, all had been shot and four of them were stuffed into heavy trash bags. As far as detectives could determine, the victims had been picked up in El Segundo or downtown Los Angeles and then dumped in several different counties.

Within a day or two of the warrants being issued for their arrest, Kearney and Hill walked into the Riverside County Sheriff’s headquarters, pointed to their pictures on a wanted poster, and surrendered. They were booked on suspicion of two murders; but Los Angeles County Sheriff’s investigators said that “there may be as many as 30 to 35 more bodies”, but they qualified the statement: “none of this has been confirmed.”

Immediately following the July 4th holiday, Kearney and Hill were arraigned for the “trash bag” killings and bail was set at $500,000 each.

Detectives from five Southern California counties reviewed their John and Jane Doe cases to see if there were other possible victims that matched the “trash bag” M.O., and they found several that appeared similar.

David Hill’s mother, Edna, was interviewed in her hometown of Lubbock, Texas: “My David would do anything like that. I know the Lord’s going to help. He’ll take care of him.”

Hill had had a had a rough childhood. He was one of 9 kids and his father, J.W. Hill Sr., hanged himself in late 1948, leaving his family to struggle. Hill seemed always to be at loose ends. He never finished high school and was rarely employed. Finally, as many rootless young men do, he enlisted in the U.S. Army. He completed his basic training at Ft. Ord, California and never went back to Lubbock to live. He occasionally visited his family and reconnected with his  high school sweetheart, whom he married. He met Kearney in 1962 and his wife divorced him in 1966.

Nobody was surprised that Hill’s mother defended her son, but what came as a complete surprise was that Kearney did the same. Soon after surrendering Kearney began to talk. He revealed the location of a victim he had buried between two garages at the rear of a triplex he and Hill had shared in 1968. Lt. Ed Douglas of the L.A. County Sheriff’s Department said that Kearney knew the victim only as “George”. The skeleton was unearthed and there was a hole in the skull, likely caused by a gunshot.

On July 14, nine days after they had surrendered themselves to the Riverside Sheriff’s Department, charges against Hill were dropped. To spare him from having to gun a gauntlet of reporters and photographers Hill was secretly taken from the jail. He may have gotten a “get out of jail free” card, but his attorney wisely counseled him to keep mum because there was a chance he could be recharged.

The Riverside County Grand Jury indicted Kearney for murder. He lead detectives to George’s grave in Culver City–would he lead them to other victims?  What about Ronnie Smith? His murder didn’t fit the M.O.–was he a victim of the Trash Bag Killer?  His family still needed answers.

NEXT TIME:  At last–more answers than questions.