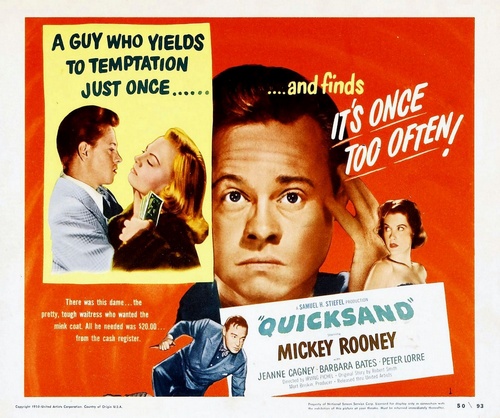 Tonight, as a tribute to Mickey Rooney who passed away earlier this week, we’re showing a double feature starring the diminutive actor. If you only recall Rooney as Andy Hardy, you’re in for a surprise. The actor actually took his turn at film noir during the 1950s.

At a diner, young auto mechanic Dan Brady has just finished telling his co-worker Chuck that he has broken up with his adoring girl friend, Helen Calder, when he notices the stunning blonde cashier, Vera Novak. Dan convinces Vera to go out with him that evening, but when he returns to his job at the garage, he remembers that he has no money. While making change at the register, Dan realizes that the bookkeeper will not be in to check the cash drawer for a few days and decides to borrow twenty dollars, intending to pay it back the next day when he collects the money that his friend, Buzz Larson, owes him. 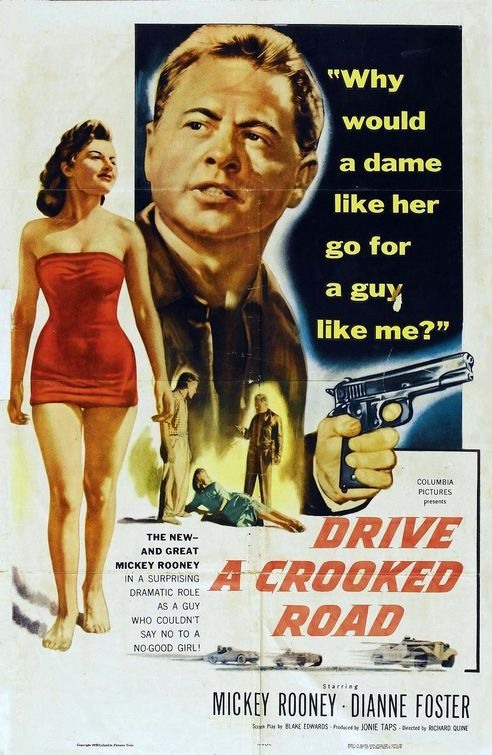 Los Angeles auto mechanic Eddie Shannon, a devoted car buff with no family or other outside interests, frequently competes in local car races to improve his driving. The other mechanics at work tease Eddie constantly over his diminutive stature and solitary nature. One day Eddie meets Barbara Mathews, an attractive woman who invites him to the beach. Uncertainly, Eddie accepts the invitation, and at the beach Barbara introduces him to Steve Norris, a handsome businessman from the East, who is spending several weeks in a Santa Monica beach house. Eddie is surprised when Barbara shows an interest in him and shyly begins dating her. Barbara tries to learn as much about Eddie’s interests as possible, but asks him if he is content to remain a mechanic all his life. Eddie confides that his dream has always been to drive in one of the top European races. Barbara takes Eddie to a party thrown by Steve and his associate, Harold Baker, and during the evening, Steve asks Eddie his opinion about the best kind of race car. After the party, Barbara advises Eddie that Steve might be able to help him realize his dream of racing in Europe. Later that evening, Steve visits Barbara, eager to discuss plans for a bank robbery, for which they hope to use Eddie’s driving skill. Barbara pleads with Steve to call off the heist, as she feels sorry for Eddie, a lonely man who has never experienced love…