Benton L. Barrett (65) hadn’t known Irene (45) for very long before he married her in San Diego in 1914. Irene had been keen on a brief courtship and Benton happily demurred — after all, he was in love. Irene didn’t want to rush to the altar because she was crazy in love with Benton — far from it. She was working a badger game on him. Benton had signed over a one-half interest in his 5 acre property, plus $25,000 ($584,000 in current dollars), to Irene before they ever strolled down the aisle!

Irene wasn’t the only person with a vested interest in Benton’s money and property. While still a newlywed Irene claimed that Benton’s cousin, Charles (an attorney), had it in for her and was spreading rumors about her extra-marital affairs. Unfortunately for Irene, they weren’t rumors. Charles had hired a private investigator to shadow Irene and the PI uncovered evidence of Irene’s infidelity.

Benton remained unconvinced of his wife’s duplicity until he was introduced to Mr. George Forbes. George produced 31 letters, all of them racy (and some of them obscene) written by his randy correspondent Irene – who frequently signed herself as “Your Loving Wife…”

Was Benton’s jealousy enough to drive him to commit murder?

Two days after Irene and Raymond had disappeared Benton went to his attorney and confessed to the murders. He told a grisly tale:

“I now feel my wife and stepson plotted to kill me. Last Wednesday morning my wife and I quarreled bitterly over a bundle of 31 letters she wrote to George Forbes. I had read the letters and I was insanely jealous. Jealousy robs a man of life and the desire to live. I was insane and she was angry, angry at being found out.”

“After breakfast the boy picked up his cap and started out the front door. My wife followed him and they talked for a long time in the hall. I did not hear what they were saying but I know now they were plotting to kill me. I went out to the yard, started a rubbish fire and she followed. I went into the stable and she came there with a knife. The boy followed her. I killed them both and took their bodies to the fire, where I tried to burn them up. At 3:30 o’clock I stopped feeding the flames. There was a pile of embers that looked like a grave. I pulled at this pile with a branch of a peach tree and exposed the bodies. They glowed redly in the embers and I covered them over.”

Benton told the lawyer that he had obsessively tended the fire, then on Friday night he removed the skulls and long bones and threw them in the cesspool. Just like Lady Macbeth he compulsively washed his hands, but of course they wouldn’t come clean. 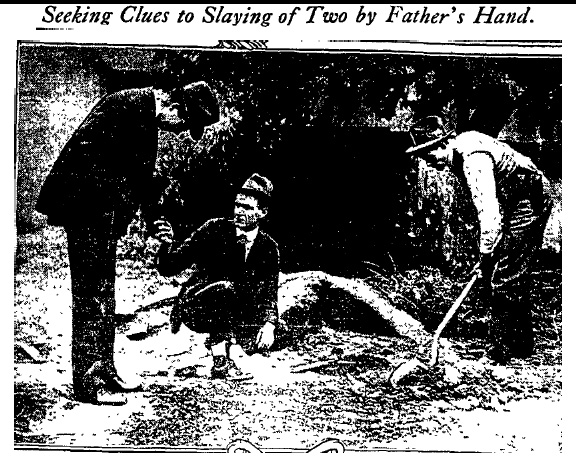 Benton claimed self-defense and said that he had been driven to murder due to the various legal battles going on in the family. He said after he’d burned the bodies he had lapsed into a three day daze.

Cops went to the property and found a small amount of burned bones and teeth in a backyard funeral pyre. Then they began to eyeball the cesspool under the outhouse — maybe  it held a clue to the alleged murders.

Cops inventoried the cesspool and found:

Hundreds of people circled the property and watched as police pulled several bloodied weapons from a barn. But Benton’s confession had developed some major holes. Many believed that the 65 year old man wasn’t capable of doing all of the heavy lifting involved in the killings without help – and there wasn’t a hint of an accomplice. Besides, there weren’t enough bones found to have made two complete adult skeletons.  It was also troubling was that Benton seemed to be highly suggestible and changed his story based on what police would show him and tell him. Then there were the supposed sightings of Irene and Raymond which had begun within hours of their alleged murders! 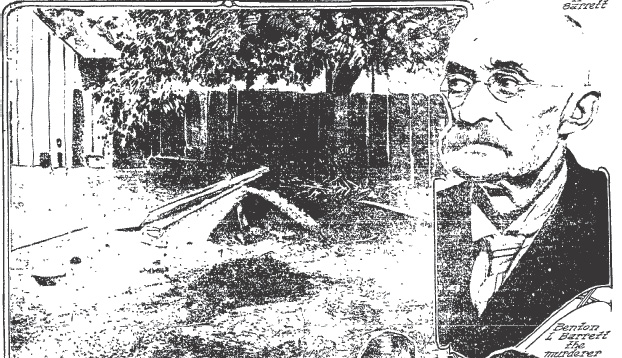 Unfortunately for Benton, neither his mental state, nor the sightings of his “victims”, would be enough to keep him from being tried for a double homicide.

NEXT TIME:  The tale of the Santa Monica Cesspool Slayings continues.