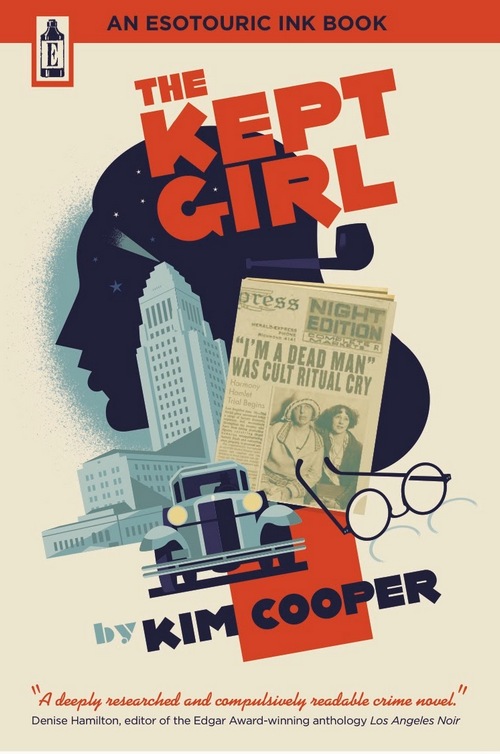 Kim Cooper and I have been friends for several years, and while she may be familiar to many of you for her tireless efforts on behalf of historic preservation in Los Angeles, she is also the brains behind the seminal Los Angeles crime-a-day blog THE 1947 PROJECT, Esotouric Bus Adventures, and endeavors such as the remarkable Los Angeles Visionaries Association which hosts monthly salons covering topics that will open your eyes and your mind.

Now, with today’s launch of THE KEPT GIRL, Kim may also add novelist to her list of accomplishments.

THE KEPT GIRL is set in Los Angeles during 1929 and it explores a demented cult of angel worshipers as they are investigated by oil company executive (and future novelist) Raymond Chandler, and a straight-arrow LAPD cop, Thomas James. Remarkably, Kim’s novel is based on a true and utterly deranged L.A. story which I know that you will enjoy. Her novel is available today on Amazon and I urge you to pick up a copy.

To track the progress of Kim’s blog tour, on which Deranged L.A. Crimes is the first stop, go HERE.

Now, let’s get to the good stuff–earlier today Kim and I sat down to discuss her novel.

Joan Renner: Congratulations on your first novel, The Kept Girl! I’m curious, there were so many esoteric religious groups and cults in L.A. during the 1920s — what was it about The Great Eleven that captured  your imagination and compelled you to write about it?

Kim Cooper: Thank you, Joan! I can still remember the moment I discovered the Great Eleven, while researching crimes for Esotouric’s Wild Wild West Side tour, which you co-hosted with me.

I was searching the historic “Los Angeles Times” archives for strange keywords, and because these folks were so deeply strange, an article about the discovery of the long-missing teenage priestess Willa Rhoads popped up immediately. There were so many
intriguing elements in that one story– weird rituals, financial fraud, the Santa Susana hills best known as the hideout of the Manson Family, runaway wives, divine resurrection, etc. — that I had to learn everything about the group. Six years later, here they are in a novel!

(Parenthetically, I hope you’re not offended that I kept the Great Eleven to myself for that crime bus tour and didn’t give you a chance to tell the tale. The truth of the matter is that I fell a bit in love with Willa, and didn’t want to share her. I think you understand the feeling.)

Joan Renner: I understand very well becoming attached to some of the people we run across in our research. I’m half in love with a crazy multiple murderer myself! But speaking of research, in your novel Ray refers to “the myth” of his relationship with Cissy. What inspired you to deviate from the romanticized version of their story that has so often been told?

Kim Cooper: Like many fans of the writer, I have long been charmed by the narrative of Ray’s deep affection for Cissy, despite their large age difference and her inability to fit in with his Hollywood colleagues. But when new research casts a fresh perspective on a familiar story, I’m always eager to see where truth and fiction meet.

A few years back Loren Latker, who maintains the Shamus Town website and who was instrumental in the successful legal plea to finally put Cissy Chandler’s forgotten cremains into her husband’s grave, set himself the task of going methodically through the chronological records of the County of Los Angeles for anything related to Raymond Chandler. These records are not digitally searchable, and no Chandler biographer had previously taken the time. Loren didn’t know what he might find, but like a panner for gold, thought it was worth looking.

Sure enough, he soon found a nugget: records from early 1930, documenting the formal separation of Ray and Cissy in their sixth year of marriage!

Since their marriage was breaking down at the exact time that the Great Eleven cult came into the public eye, if I was going to write truthfully about Raymond Chandler at home, troubles with Cissy had to be part of the story.

Joan Renner: In your novel Raymond Chandler’s relationship with his secretary, Muriel Fischer is a love story, but it is also the tale of a woman who discovers and embraces her independence. Would you mind telling the Deranged L.A. Crimes readers on whom Muriel is based?

Kim Cooper: The character of Muriel is inspired by our mutual friend, much missed, Dorothy Fisher. About twenty years after my book is set, the teenaged Dorothy was selected out of the secretarial pool at Paramount to be Chandler’s right hand girl. She had lovely, tender stories about their working relationship that she shared with us. These stories gave me insights into Chandler’s personality–and Dorothy’s character gave me insights into the kind of woman that Chandler was drawn to.

Joan Renner: All of the characters in your novel are finely drawn and fully realized portraits, and I sensed that you felt some affection even for the most reprehensible of them. I wonder, if you could be any character in The Kept Girl for one day who would you be?

Kim Cooper: Thank you, Joan– I’m glad you think so. Even before I thought about writing this novel, I worked hard seeking to understand the motivations of the various characters, to be better able to quickly describe their odd behaviors on the bus in a way that made sense to our passengers.

This is a very good question. Although I feel more of a personal affinity to other characters, if I could spend the day as one of them, I’d pick the policeman Tom James. My reasoning: he is the one person in the book who can move freely among all levels of society, and he visits all the most interesting locations.

As Tom, I could go from a basement speakeasy to the County Morgue, from police headquarters to Chandler’s oil company offices, from an off-limits downtown rooftop to a stranger’s parlor on Bunker Hill, and be welcomed wherever I went. Of course, first thing I’ll have to do when I get to 1929 Los Angeles is call in sick from my beat at 7th & Broadway. I don’t want to waste my one day as a time traveler helping people cross the street!

Joan Renner: Raymond Chandler and Thomas James seem to me to be a perfect one-two punch — the ideal crime solving duo. Do you have any plans to feature them in a future novel?

Kim Cooper: I’m definitely thinking about it, and looking for another old Los Angeles problem that might be suitable for their particular talents.

Joan Renner:  I’m glad to hear that you’re thinking about writing another novel — The Kept Girl is simply wonderful! I want to thank you, Kim, for spending time with Deranged L.A. Crimes. Do you have any parting thoughts on your novel, or anything else for that matter, that you’d like to share?

Kim Cooper: It’s been my pleasure. Thanks for having me, Joan. I can’t think of another site where I’d rather launch the February blog tour for “The Kept Girl” than “Deranged L.A. Crimes.” You and I have had so much fun over the past few years, blogging weird history and telling tales on the Esotouric bus, and bringing these forgotten Angelenos back into the spotlight. I hope your readers have enjoyed learning a bit about “The Kept Girl,” and look forward to returning the favor as blog tour host when YOUR book comes out!

Psst. Hey you!  If you’re the gambling type and would like to take a chance at winning a copy of Kim Cooper’s novel THE KEPT GIRL, check this out: