On August 24, 1974 five-year-old Ronald Dean Smith failed to appear for dinner. Ronnie had been playing with a friend at a local park. The friend was accounted for, but nobody knew where Ronnie was. It wasn’t like him to miss dinner and it was odd that nobody knew where he was.  His grandmother, Mrs. Shirley O’Conner, was babysitting her grandson while his mother was out of town. When she couldn’t find him she called the Los Angeles County Sheriff’s Lennox Substation.

Sheriff’s deputies talked to Ronnie’s friend. He told them that he and Ronnie had gotten into a “…sand fight” and he’d gone home to clean up leaving his friend, in tears, in the sandbox.

Teams of Sheriff’s detectives searched the eight-square-mile park and went door-to-door interviewing people but, according to Lt. Ray Gott, “No clues–nothing. The boy has just disappeared.” 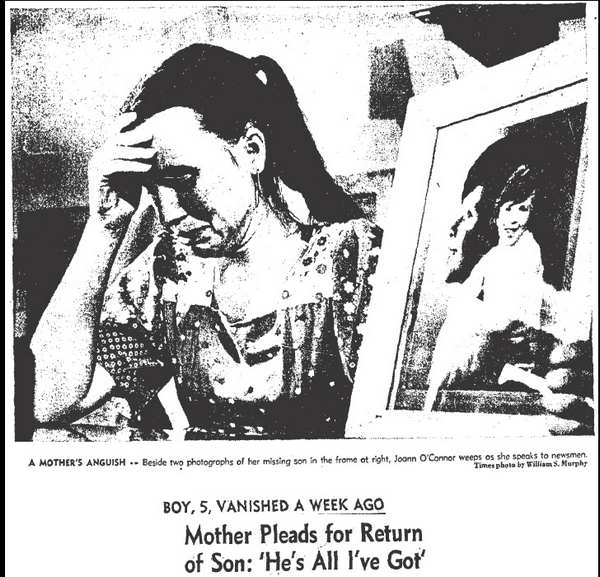 Seven days after his disappearance his mother, 22-year-old Joann O’Connor (she and Ronnie’s father were divorced) talked to the press in the squad room of the Sheriff’s station.

She made a gut-wrenching plea to the unknown person(s) who had her son.

“The reason we wanted you all to come here is to tell whoever had Ronnie how much we want him back. We definitely do feel in our hearts that he’s alive and OK and that he’s safe. I just want to tell whoever he’s with now that he’s very important to me, that he’s…”

Joann stopped for a moment, took a breath and composed herself as best she could, then she continued:

“…he’s all I’ve got. And that I love him so very much. I know that whoever took Ronnie took him because they wanted a little boy to love, and I know you took him because he’s so beautiful and that you won’t hurt him…”

On Sunday, October 13, 1974 a group of kids were collecting old beer cans along Ortega Highway near El Cariso Village in Riverside County, when they discovered a body. The Riverside County Sheriff’s Department was notified.  They immediately checked the missing persons reports and found a description of Ronnie. The body they had was too badly decomposed to be identified by its features, but the clothing matched that of the missing boy. An autopsy confirmed everyone’s worst fears.

As hard as they tried, Sheriff’s investigators failed to turn up any suspects.

In late April, 1977, nearly three years following Ronnie’s death, the remains of 17-year-old El Segundo High School senior, John Otis LaMay, were discovered wrapped in plastic bags in an 80-gallon can in Temescal Canyon. He’d been missing for about a month.

El Segundo Police Detective Roger Kahl noted that there were similarities between LaMay’s death and the deaths of numerous other victims, all young men, whose nude bodies had been found near highways in four Southern California counties since April 1975. However, he said that LaMay was the only one who had been dismembered.

Despite the anomaly, Sheriff’s offices in Riverside, Los Angeles, Orange, and San Diego Counties, along with the LAPD, were sharing information in the belief that the murders were connected.

NEXT TIME: The body count climbs. Two suspects are identified.