Jay William Campbell enlisted in the Navy in October 1942, but he wasn’t cut out for military service. He spent about 4 months in a Navy hospital before he was diagnosed as a psychoneurotic and discharged in 1943.

Jay’s wife Mary felt partly responsible for his mental problems. She had lost their first child in an accident while Jay was in the Navy and she said that it had a “very bad effect on him.” 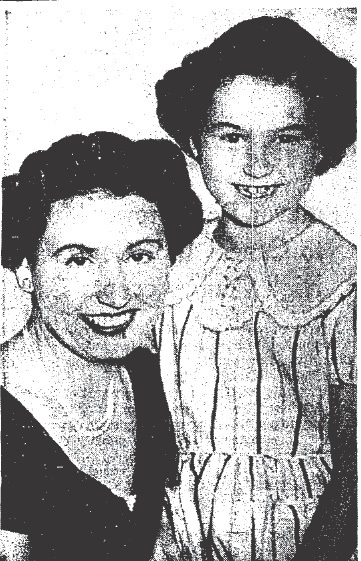 The couple moved on with their lives and in 1946 they were blessed with another child, a little girl they named Judy. Jay had found work as a milkman and by the end of 1951, the family was living in Van Nuys at 14205 Burton Street. Their home was across from Judy’s elementary school where she was in the second grade.

Theirs should have been the perfect post-war family, but Jay couldn’t resolve his emotional problems. He was, according to Mary, “…a worrier by nature.”  But Jay’s worrying had taken a troubling turn–he was becoming paranoid and jealous. He was convinced that Mary was cheating on him with a family friend named Chet, and his suspicions were causing a rift in their marriage. Mary and Chet were friends, but she vehemently denied that they was anything untoward between them.

In mid-December Mary wrote Jay a note and packed it with his lunch. The note read:

“Jay Dearest–I gave you a reason to doubt my love for you and now I have to do something to chase away the doubt.  I couldn’t live without you at my side where you belong.   I’ll always want to be yours and please dear be as you are and don’t change.  I really love you.
Your Mary.”

By New Year’s Eve Mary had reason to hope that Jay had overcome his jealousy. He had the day off and he wanted to spend the afternoon with his little girl. He told Mary: “Be ready at 4:30. I’ll take you and Judy to dinner.”

At 4:30 Mary heard a small plane buzzing the house. Jay was a pilot–maybe he’d taken Judy out for a plane ride–he’d done it before.  She stepped outside but didn’t recognize the aircraft; even so she had a premonition that it was Jay and Judy. As she watched the small plane appeared to stop for a second in sky; then it spiraled downward ripping into several 4800 volt power lines. The neighborhood was plunged into darkness. The only light came from the burning plane.which had smashed into the school playground across the street.

Mary’s premonition had come horrifyingly true–the victims were Jay and Judy. Fireman had to cut the twisted metal away from their bodies before they could pull them out. They had died on impact. A color photo of Mary and Judy was found among Jay’s personal effects. The photo had been a Christmas gift.

What had happened? Jay was a competent pilot, he’d had a commercial license for 3 years. Had there been a mechanical failure?

Jay had rented the plane from Mort Kamm, manager of the San Fernando Airport, and it was Kamm who found a note in the glove compartment of Jay’s car.  The note was addressed to Mary and it read:

“It seems that the price one has to pay for happiness isn’t so easy to pay.  I have lost everything so that you may start anew.  You have lost me and every part of me today, including Judy.  Can you ever tell yourself that Chet was worth it all?  Please pay Mort Kamm about $600 for his airplane. Keep telling yourself that everyone gets over everything.  It may help you, but I doubt it. I have always loved you even if you haven’t loved me.  Don’t ever live a lie again.

Your Jay and Judy.”

The deaths were officially listed as suicide and murder. 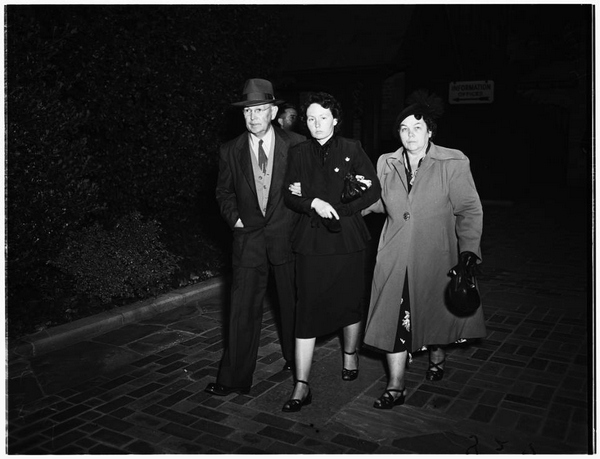 Funeral rites were conducted in Wee Kirk o’ the Heather on January 5, 1952.  Jay and Judy were buried in the same grave at Forest Lawn Memorial Park.  Judy was accompanied  into the afterlife by the doll she had received as a Christmas present. 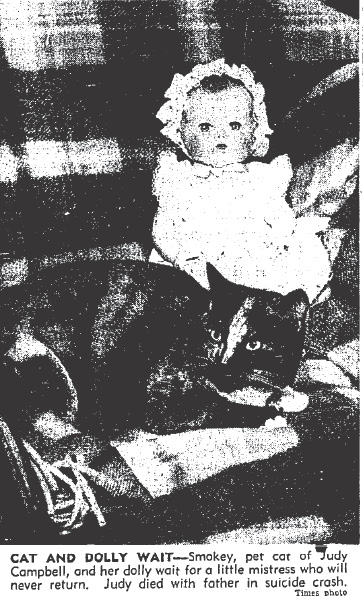 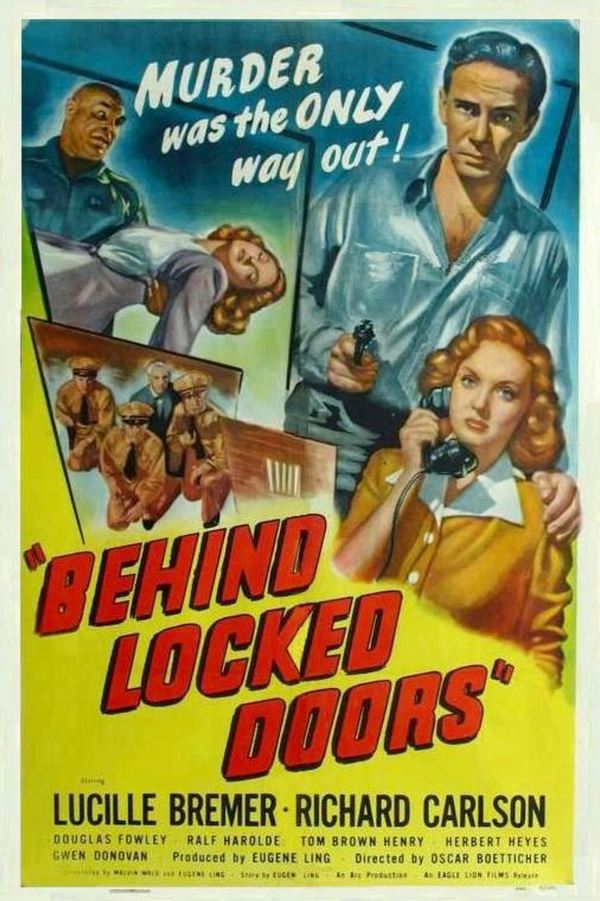 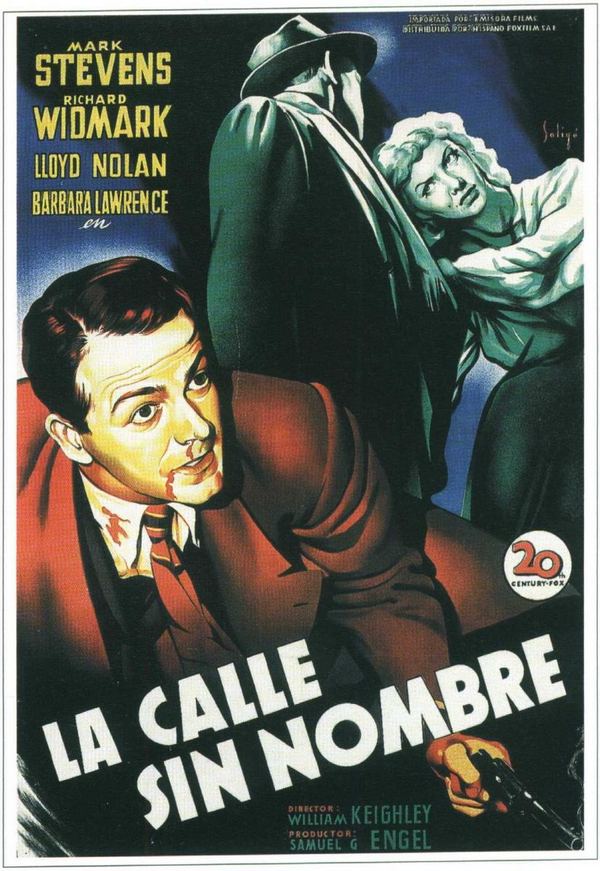 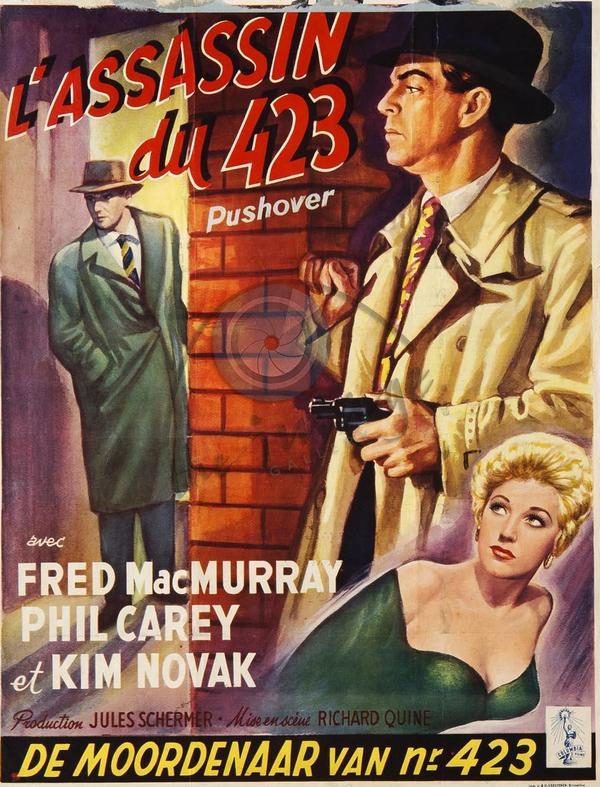 A carefully planned bank heist by hoodlum Harry Wheeler and his partner leaves a policeman dead and $200,000 stolen. After the police investigation, headed by Lt. Carl Ekstrom, identifies Wheeler as the culprit, Eckstrom assigns detective Paul Sheridan to befriend Wheeler’s girl friend, Lona McLane, who has moved into an apartment in town. Paul stages a meeting with Lona and a powerful attraction develops between the two. Paul takes Lona to his apartment for the night, then spends the next several days with her. Later, Eckstrom, Paul and his partner, Rick McAllister, devise a stakeout across from Lona’s apartment, and wait for Wheeler to contact her. On Paul and Rick’s first shift, Lona leaves the apartment and Paul follows her, only to be startled when she drives to his apartment. He meets her there and she accuses him of having staged their meeting and asks if he is a cop. Paul admits to being a detective, but insists that he has been seeing her for personal reasons.