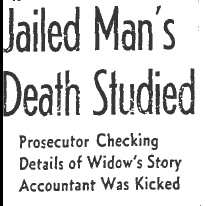 From the 1920s through the 1950s political corruption, police pay-offs and rumors of police brutality were part of life in Los Angeles. Countless books (read any of James Ellroy’s novels), newspaper articles and angry editorials have been written on the topic.

There were many instances of malfeasance in the city. From the framing of city councilman Carl Jacobson, a vice crusader, on morals charges by political enemies in 1927, to the “Bloody Christmas” beatings of prisoners by LAPD officers in 1951 the city was up to its eyeballs in excrement.

On December 19, 1943 Mr. Stanley H. Beebe, a 44-year-old certified public accountant with a job in the war industry, was pulled off of a streetcar at First and Hill for public intoxication. He was booked by Sergeant J.E. Martin then transferred to Lincoln Heights Jail. His wife Maxine turned up and paid the $10 fine–Stanley was kicked loose.

Maxine was horrified by Stan’s condition. He had a couple of shiners and a large hourglass-shaped bruise (which looked like a shoe print) on his abdomen. He couldn’t stand up straight and she had to help him into the taxi that took them to their apartment at 1819 N. Kingsley Drive. Stan told Maxine that he had been kicked in the stomach by one of the officers and that he had been vomiting and in excruciating pain ever since.

The day following her husband’s release Maxine phoned the Police Department to make a complaint–she reported what her husband had told her, that he had been beaten severely by officers while in custody. Her complaint went nowhere until Stan died of a ruptured bladder, which had resulted in peritonitis, at General Hospital on December 29th and his widow took her complaint higher up the food chain to the District Attorney and the Coroner.

With the news of Stan’s death, Detective Lieutenant Lloyd Hurst was tasked with investigating Maxine’s complaint. Every officer who admitted to having seen Beebe the night of his arrest stated that the man had not been assaulted while in their custody. LAPD wasn’t going to be solely responsible for the investigation into Beebe’s death, however.  District Attorney John F. Dockweiler assigned Deputy District Attorney Robert G. Wheeler and Investigators Charles Ebbets, Everett Davis and Kenneth Gillie to check out the allegations.

“Police brutality, if any exists, cannot be condoned in this community.  I have ordered a thorough investigation into the death of Mr. Beebe to determine the truth of his charges that he was fatally injured by police officers while under arrest.”

The 1943 grand jury would review the case as soon as it was impaneled.

D.A. Dockweiler pressed Chief of Police Horrall for his department’s cooperation in the investigation of Beebe’s death. Horrall (who would be involved in a vice/corruption scandal just a few years later) pledged LAPD’s full cooperation. 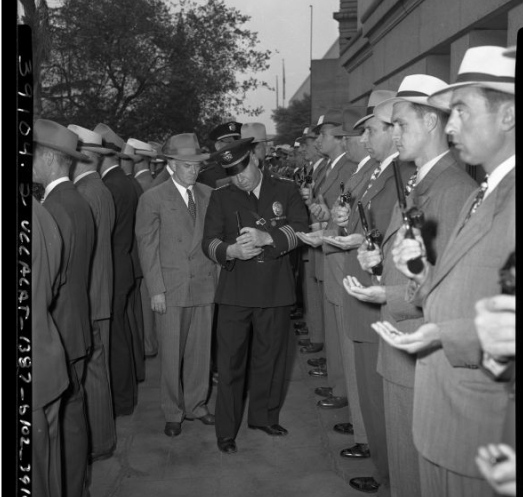 Coroner Nance weighed in with his findings in Beebe’s autopsy. He stated that Stan had died of peritonitis  the result of a ruptured gall bladder.  To head off any attempts to blame the deceased’s death on a diseased gall bladder, Nance made it crystal clear that the organ had been healthy until it was damaged by an external blow–and there were plenty of bruises to prove his assertion.

“I intend to find out who kicked or struck this man in the abdomen.  The police and District Attorney have promised me full cooperation and I have deferred the inquest until

“Whatever happens, I will not close this case until I am satisfied that every bit of available evidence has been made available at the inquest.”

The  D.A.’s investigators questioned more than 60 men who had shared the drunk tank with Stan on the night of his incarceration. Jail trustees were also grilled.

Otto Schalinske, the Central Jail turnkey, was summoned to Wheeler’s office for questioning but he didn’t go alone, he was accompanied by Chief Horrall and Vernon Rasmussen, chief of the police homicide detail. There was no way the conversation among the men could be kept secret and portions of their meeting was printed in theL.A. Times:

“Were you the officer who removed Beebe from the chair in the lieutenant’s office after he had telephoned his wife?”

“I am,” Schalinske answered.  “I removed him gently and did not harm him.”

“Did you hit Beebe in the jaw when he remonstrated against being confined in the jail, and when his chair overtunred kick him in the abdomen?”

“No,” Schalinske replied.  “I just took him to the tank.”

Wheeler was quick to point out that question the officers didn’t mean that they were guilty of anything–he was simply seeking the truth.

Wheeler admitted that he was troubled by the fact that the entire investigation was “pigeonholed by the police for more than a week after Beebe’s death, despite the pleas of relatives for an active investigation.”

Investigators were also trying to find out what had happened to the $40 that Stan supposedly had in his wallet shortly before his arrest.

One of the policemen questioned, Sergeant R.C. Kucera, had visited Beebe at General Hospital and could bear witness to the number and extent of the man’s injuries which included two discolored eyes, a black and blue mark two inches in diameter on the center of his abdomen, abrasions of the left groin and a black and blue mark the size of a half dollar on his throat.

So far the investigation seemed to substantiate Maxine’s assertion that Stan had been badly beaten by cops; however the most damning piece of evidence was Stan’s death bed statement.  It was reprinted verbatim in the L.A. Times and I’m reprinting it here because I think it is important to hear the incident described by Stan in his own words.

On this Christmas Eve–December 24, 1942–a statement to the best of my memory as what happened the night of the 199th as long as I could remember, recorded by my wife in a question-and-answer form–

A parade of police and civilians who were in Central Station during Stan’s alleged beating were questioned. The police officers who were interviewed said that they hadn’t seen or heard a thing that was out of line.

If Stan’s statement was false then he had managed to erode the public’s trust in their police department and, additionally, sullied the reputations of members of the LAPD for no good reason.

But what if Stan had told the truth? If his statement was true then no citizen of Los Angeles could feel safe in the presence of the people who had sworn to protect and serve them.

Newspaper accounts suggested that a Blue Wall of Silence was being constructed–it was going to take committed investigators to discover the truth.

NEXT TIME: The investigation into Stanley Beebe’s death continues.