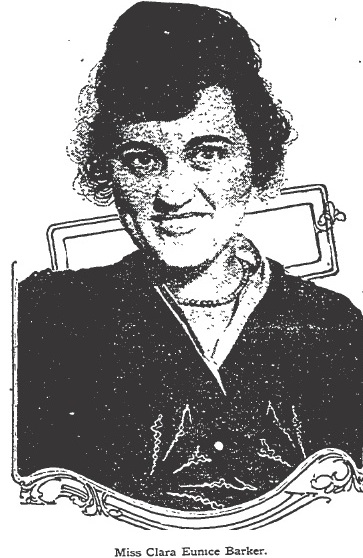 Grace hoped to win $50,000 in the suit, but Clara had a trump card to play; a bundle of love notes written to her by none other than Charles Munro. Clara had hidden the letters in the attic of the Glendale home she had shared with Charles while they were pretending to be cousins for the benefit of Glendale society. The bundle was an unpleasant surprise for Charles who had been under the impression that all of his letters and Clara’s had been destroyed. Clearly neither Clara nor Charles had fully grasped the truth of the old maxim, never put anything in writing that you wouldn’t want to have read in open court.

The lawsuit was about to get steamy, and Angelenos must have been anticipating a knock-down, drag-out fight between Munro’s wife and mistress. I know I would have been happy to wait in a queue for a seat at the trial.

Clara Barker took the stand and according to the L.A. Times she testified to: “bare the sordid romance that she says ruined her young life”. She told the court how she and Charles Munro had met.

“I met him at the corner of Montgomery and Front streets, Trenton (New Jersey). I was working in a Trenton pottery and was on my way to the post office to mail letters for the potter. A big automobile nearly struck me. The driver stopped the car and asked me if I was hurt. When I told him no, he kindly offered to drive me home, after ascertaining where I lived. He said it was on his way.”

According to Clara, Charles persuaded her to get into his car.

“He asked me where I was employed, my house address and telephone number. He did not enter the house.”

Clara testified that after their initial meeting Charles phoned her every day and he finally invited her out for dinner. He said that his name was Darrell Huntington Stewart and that he lived at Wayne Junction, PA.

For three weeks the couple dined at the same restaurant nearly every night until Darrell proposed to Clara.

Clara was won over by the generosity and sweetness of her suitor. She’d been swept her off her feet.

As lovers will do, Charles sent two photos of himself to Clara and he had inscribed them on the backs:

“With all my love to my future wife, Clara Eunice Barker. Your own, Darrell.”

Soon after sending Clara the photos he asked her to accompany him on a business trip to New York, and she agreed to go.

Clara was given her own room which led her to believe that Charles’ intentions were honorable. They were not.

Late in the afternoon on the first day of their trip Charles came to Clara’s room. Clara testified that:

“He told me there was no harm in his being there, as we were soon to be married. Whatever happened was all right; it would make no difference; we would be married within a week. I believed him.”

A few weeks after the trip Clara at last became suspicious of Charles. He’d made no move to set a wedding date, and she said that he always seemed to be in Trenton; he never phoned from Philadelphia where he supposedly lived.

The clue to Charles’ true identity came accidently when she overheard some men say:

“There is only one man in Trenton who owns a brown automobile of a certain make, and that man is Munro.”

Knowing that her lover, the mysterious Darrell, drove a car matching the description of Munro’s she decided to do a bit of sleuthing.

Clara phoned the zinc works and asked for Charles Munro — when he answered the phone she recognized his voice as belonging to her fiancee, Darrell.

“I was horrified. I asked him how he could have done such a thing. He said he fell in love with me the first time we met. He said before he met me he was preparing to run away with another girl, May Pierson, who was his stenographer…now that he had met me, he would not run away with her. He would get a divorce. He said he had a miserable life.”

After his identity had been revealed, Charles cajoled, sweet talked, and threatened Clara in an effort to keep her — and Clara stayed.

Early in her relationship with Charles, in January of 1915, Clara had received a telephone call from Grace Munro. Grace said that Charles was “a liar and a hypocrite”. Mrs. Munro knew her husband well.  Although, given Charles’ behavior, Clara had every reason to believe that Grace was telling her the truth, she would not give him up.

Charles must have had some uncomfortable moments after his wife and mistress spoke to one another on the telephone. It would have served him right if they’d joined forces and fleeced him for every cent. Sadly, they continued to fight over him instead. To keep the two women apart Charles had warned Clara to steer clear of his wife whom he characterized as a terrible person. He told Clara that Grace was likely to hurl acid into her face!

Charles continued to string Clara along with promises of marriage. The pair moved around finally arriving in Southern California where, masquerading as cousins, they started a new life in Glendale. But Clara grew tired of waiting for Charles to make good on his promises to divorce his wife, and in a fit of despair she swallowed poison — though not a fatal dose.

Charles had written many dozens of letters to Clara, and in each one he declared his undying love for her. But even Charles began to realize that Clara might not wait for him indefinitely:

“I know, darling, you are not made of stone, and that you cannot wait very long, and I am pushing everything to the limit so we can soon be together.”

If Charles’ love talk didn’t work its magic on Clara, perhaps threats would. He wrote to her about a dream he’d had:

“I told you if you were not true, I would kill you. But I changed my mind as I wanted to see you suffer. I woke with the most awful yell, and was laughing. But, oh, what a laugh.”

After a trial lasting nine days, the jury of eleven men and one woman prepared to deliberate. It took them fewer than six hours to find Clara “not guilty of the love theft”. 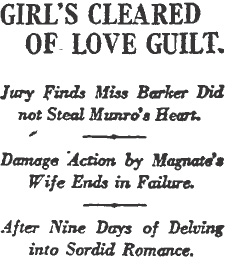 Surprisingly, the battle of Wife vs. Mistress had not ended with the verdict — a new trial was granted because a judge determined that the judgment in favor of Clara was against the weight of the evidence.

Revitalized by the opportunity for a new fight, and another chance at $50,000, Grace Munro declared that Clara was a vampire who had enticed Charles away from his marriage. Grace obviously intended to drive a financial, if not an actual, stake through the heart of her rival. 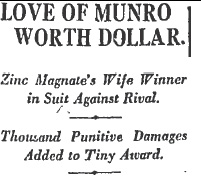 Grace was victorious in the second trial, but instead of the $50k she’d asked for, the judge awarded her one measly dollar! The judge assessed $1000 damages against Clara, making the total award $1001.

The judge obviously disapproved of both Charles and Clara. He said:

“The tie that bound Mr. Munro and Miss Barker was low and degraded.” 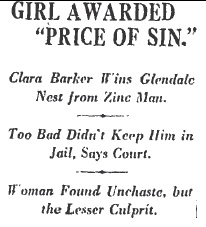 Low and degraded she may have been, but Clara was successful in her lawsuit and recovered the “love nest” in Glendale in addition to furniture, bonds, and other gifts given to her by Charles.

The Munro’s attorneys felt Clara didn’t deserve a penny. They said that her hands were not clean, and that the property given her was the “price of her sin”. Sounds like they would have sewn a scarlet letter to her dress if they had been allowed to.

Judge Wood didn’t entirely disagree with the statement, but seemed to feel that sin is a matter of degree:

“If I distinguish between the two, she is the lesser sinner.”

And to the lesser sinner, go the spoils.