At his arraignment, Steven Hurd entered a plea of innocent by reason of insanity. While being held without bail in Orange County Jail, Hurd complained about being kept in solitary confinement. He whined that he had no television and nothing to read.

Claiming satanism as his religion he asked for three books on the subject, but Superior Judge Samuel Dreizen nixed the request — but he did allow Hurd to have two sci-fi books.

Craig Hulse pleaded innocent and innocent by reason of insanity to the hatchet murder of Jerry W. Carlin. Craig’s attorney, Robert Green, petitioned for a separate trial for his
client. Green contended that Hulse couldn’t possibly get a fair hearing if he was tried for murder with his co-defendants because of “highly prejudicial” newspaper publicity. The judge agreed.

However, the motion to allow Craig to be processed as a juvenile was denied. He would
stand trial as an adult.

Christopher Gibboney unsuccessfully fought extradition from his home state of Oregon.
Gibboney petitioned to be processed as a juvenile but, like Hulse, he was ordered to
stand trial as an adult for the murder of Florence Brown.

Herman Taylor turned state’s evidence after the district attorney promised to reduce
his charges to two counts of accessory to murder. He was also promised a sentence
of one year in jail dating from his original arrest date, July 1, 1970. The deal was a no-
brainer for him and he took it.

Melanie Daniels, the thirty-one year old waitress with a boyfriend in San Quentin, was already serving time in Orange County Jail on a drugs charge when, in September 1970, she was sentenced to two consecutive one-to-five year prison terms after she pleaded guilty to being an accessory in the murders. Dep. Dist. Atty. Martin J. Heneghan urged Judge Dreizen to impose the consecutive sentences saying:

“If there ever has been a case where consecutive sentences were warranted, this is it.”

Steven Hurd was found insane and unable to assist in his own defense. He was incarcerated at Atascadero until such time as he was deemed fit to stand trial. 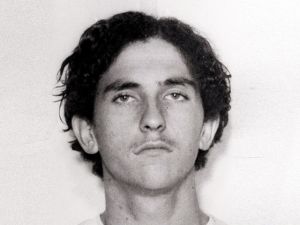 In December 1973 he was briefly found to be sane, but was re-confined in the state hospital by May 1974. One of the psychiatrists who examined Hurd declared him the most dangerous man he had ever seen.

Finally in 1975, the California Supreme Court ruled that Steven Hurd could stand trial while under the influence of powerful tranquilizers. Hospital doctors had pronounced him sane, but said he could function properly only if tranquilized. 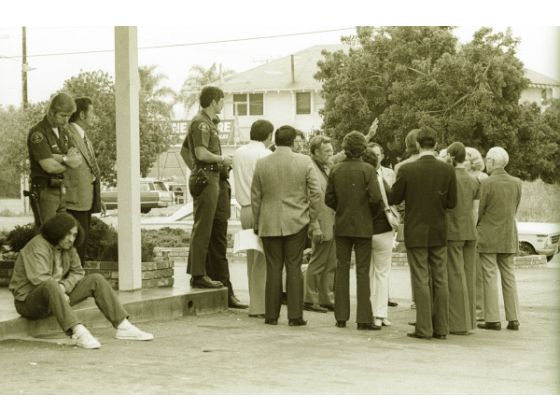 Orange County jurors in the 1975 trial of devil-cult leader Steven Hurd listened to testimony at a Santa Ana gas station where attendant Jerry Wayne Carlin was murdered in 1970. [Photo courtesy of the O.C. Register]

A purported confession and other statements made by Hurd in 1970 were ruled admissible as evidence in his trial.

In mid-June 1975 Steven Hurd, self-professed devil worshiper, was found guilty of two
charges of first degree murder in the 1970 slayings. A jury of six men and six women deliberated for two days before arriving at the verdict. He was sentenced to two consecutive life terms.

At his subsequent sanity hearing, Hurd made frequent references to “my father, the
devil” as he proceeded to relate details of the murder of Florence Brown. 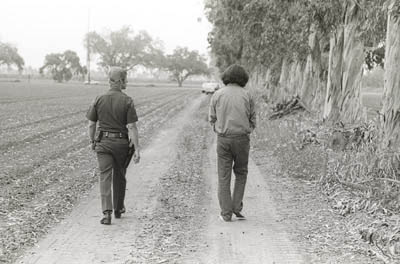 May 19, 1975. Steven Hurd , right, walks with an officer during the jury tour of the crime scene. [Photo courtesy of the O.C. Register]

Hurd said that several days after Brown was stabbed to death in an orange grove he
disinterred her body from the shallow grave along Ortega Highway.

He told the court he removed the heart, burned part of it and ate the rest. He used
ashes and paper to make a “star of death” around the heart as part of a devil’s rite.
According to Hurd when he was finished the devil told him he was “proud of him”.

Steven C. Hurd died of a brain hemorrhage on May 28, 2005 in a hospital outside Mule
Creek State Prison in Amador County. He’d often stated that when he died he would
go to hell. When asked what he thought hell was like he said:

“Everything I need and want. No one to call me names; no one to laugh at me and no one to fuck with my head.”

Maybe Hurd’s vision of hell was accurate–I’ve never talked to anyone who knows. .

In May 1972, Gibboney pleaded guilty to second-degree murder for the slaying of Florence Brown. He may have been allowed to plead to a lesser charge because the witness against him, Herman Taylor, had gone missing.

By October 1971, Taylor had spent 15 months in jail for being an accessory in the killing of Florence Brown and the hatchet slaying of Jerry Carlin. Judge Byron McMillan thought that was sufficient time and placed him on five years’ formal probation. He was ordered into custody of the California Youth Authority (CYA) because he was on parole at the time the murders were committed. He later vanished from the CYA faciltiy, even though he had agreed to be a state witness against Gibboney.

The penalty for second-degree murder is five years to life in prison. Gibboney was
ordered into the custody of the CYA to begin serving his time.

I don’t know what happened to Gibboney after he was sentenced.

Craig’s trial began in February 1971. The death penalty was off the table because
Hulse was only 16 years old when the murder occurred.

As previously stated, Herman Taylor turned state’s evidence after the district attorney promised to reduce his charges to two counts of accessory to murder.

At Craig’s trial, Taylor testified that he drove his car the night of the murder of Jerry Carlin. Taylor said that he waited in the car while Hulse, who had a hatchet tucked into the waistband of his pants, and Hurd went into the station.

The two forced Carlin to accompany them to the restroom at the back of the station and Taylor later said that he heard “a thumping noise that went on for quite a while.”

When the two returned to the car Hurd told Taylor how easy the robbery had gone and “how good a job Hulse had done.”

According to Taylor, Craig told Hurd to shut up because “he didn’t feel too good”. Taylor also said that Craig got sick to his stomach and vomited once they’d returned to the motel. After the murder Hulse said that he “tried to stay loaded most of the time” on reds and alcohol. That was as close to demonstrating remorse as Craig ever got.

Craig’s attorney’s, Robert Green and Michael Gerbosi, questioned Taylor about the
amount of drugs their client had taken prior to the killing. Taylor described Hulse as “a
stone cold red freak” — a guy who would take four to five reds five to six times in an
hour. However as far as Taylor could recall on the day of the murder Craig had taken
only two reds — he mixed them with water and injected them.

Taylor testified that he’d seen Craig shoot up before, everything from beer and wine to
medicine used on baby’s gums. Taylor said: “He just kept on fixing things.” After
shooting up Craig would sit for several hours or more, arms folded, staring off into
space.

Timothy Montag, the first of the group to be arrested in connection with the murders,
also testified against Craig. He told the court he stayed in Taylor’s motel room the night
of the murder, and the next morning was given a blue denim jacket he found on the
floor. The jacket, which had been given to Carlin by his sister, had some stains on the
back. Montag didn’t ask about them. He further stated that:

“There was a rabbit’s foot in the pocket, but I threw it away.”

On top of the damning statements made by Taylor and Montag, was Craig’s taped
confession to the cops. The confession was ruled admissible as evidence and his own
words buried him.

He had told the police that he “went kinda berserk” and kept hitting Carlin with a
hatchet because Carlin was “bugging him”. Craig said he didn’t recall what Carlin had
said, but he remembered that it made him angry and so he hit him with a hatchet.

In March 1971, after deliberating for about three hours, a jury of eight women and four
men found Arthur “Moose” Hulse guilty of first degree murder.

One of Craig’s attorney’s argued that:

“There was no premeditation and no evidence was presented that the robbery was planned, except for Taylor’s statements.”

A psychiatrist who had examined Craig diagnosed his condition as “pathological
intoxication”.

Craig’s mind may have been addled by drugs when he took a hatchet to Jerry Carlin, but he was found to have been legally sane at the time of the murder and sentenced to life in prison. He was also sentenced to five years in prison for being an accessory in the murder of Florence Brown. Craig began serving his time on March 31, 1971. 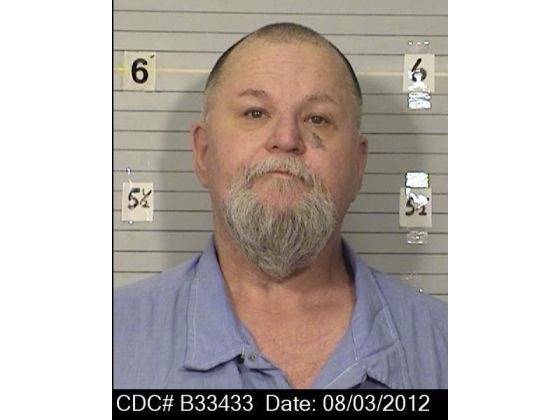 When I began researching this case I had no idea what had happened to Craig Hulse. On the rare occasions when I thought about him I assumed that he had been paroled, but that’s not what has happened.

In October 2012 Craig was denied parole for the thirteenth time — he will be eligible again in five years.

When I picked Craig up hitchhiking in 1970 he seemed sad and lost, but not evil. Days later when I learned that he’d been arrested in connection with two brutal murders I couldn’t believe it.

When I told my brother Rick that I was going to write about Craig’s case he recalled an incident he hadn’t thought of in years. He said when they were about 12 years old Craig pulled his arm up behind his back until it was painful.  Rick told him to cut it out, and then he noticed a scary expression on Craig’s face — he enjoyed inflicting pain. Their friendship didn’t last much past that.

If he wasn’t already dead inside before June 2, 1970, the kid my family knew perished for all time as soon as he crushed Jerry Carlin’s skull with a hatchet. During the four decades that he’s been incarcerated Craig has, according to the Orange County D.A.’s Office, made no attempt to become a person who can live outside of prison walls. He will almost certainly die there.

The families of his victims bear the toughest burden — the husband and children Florence Brown left behind will always have a void where she should have been all these years. Jerry Carlin died before his wife had the chance to tell him that he was going to become a father.

It is those people whose loved ones were taken from them that have my empathy and compassion.  Craig is where he belongs.