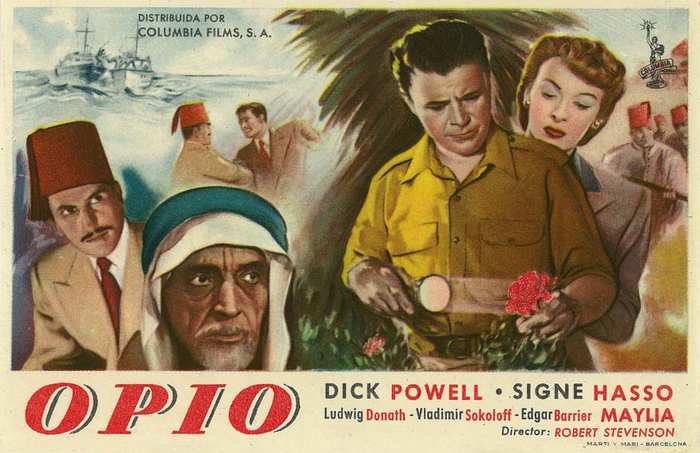 Welcome! The lobby of the Deranged L.A. Crimes theater is open. Grab a bucket of popcorn, some Milk Duds and a Coke and find a seat. Tonight’s feature is TO THE ENDS OF THE EARTH starring Dick Powell, Signe Hasso, Ludwig Donath, Vladimir Sokoloff, Edgar Barrier and Maylia. Directed by Robert Stevenson.

Yesterday’s post, HOP HEADS, was about opium addiction and tonight’s film is about a crackdown on the opium trade. I’m sensing a theme.

In the year 1935, following a United Nations-sponsored meeting of the World Narcotics Commission, the U.S. Treasury Department, Bureau of Narcotics undertakes a crackdown on the worldwide opium trade. Assigned to the investigation is Treasury Department agent Mike Barrows, who is head of the department’s San Francisco bureau. Mike is familiar with the ruthless ways of the drug traffickers, having witnessed an unmarked Japanese freighter jettison one hundred Chinese slaves off the San Francisco coast to gain enough speed to outrun a U.S. Coast Guard patrol. A life preserver bearing the name Kira Maru , and a view of the offending captain, as seen through binoculars, are the only clues Mike has to go on as he begins his investigation in Shanghai.