Craig Hulse was still on the loose when Timothy Montag, 21, was arrested in connection with the murders of Jerry Carlin and Florence Brown. It wouldn’t take cops long to determine that Montag had no involvement in the two murders, but while in custody he provided the authorities with some useful information.

Timothy belonged to the same bunch of drifters and druggies that Craig hung out with. None of the group had a fixed address, they wandered around Orange County crashing wherever they could: open fields, abandoned cars and occasionally a cheap motel room. The de facto leader of the group was Steven Hurd.

Hurd and Montag had met in February 1969 in a Garden Grove apartment. Montag described the scene:

“There used to be an apartment in Garden Grove where…there was like a brotherhood in dope…kind of like a supermarket…anyone that wanted to do something just went ahead and did it, and if it sounded good to the other people they’d go along.”

The drifters continued to hang out together even after the apartment ceased to be their hang-out.The guys could usually be found near the intersection of Fairview Street and Trask Avenue in Santa Ana getting high, they called the area “The Block”.

The cops had lots of questions for Montag, particularly about the days of the two murders.Timothy related what he could recall.  He said that one member of their group had a car and on June 1st, the night before Jerry Carlin was killed, he and others from “The Block” drove to a motel room in Costa Mesa to party. Montag spent the evening getting wasted and so he “was in no shape to remember anything” and crashed in the room. At 1:15 a.m. June 2, Jerry Carlin was bludgeoned to death with a hatchet — his killers stole $73 from the service station till.

Later the next day members of the group piled into the car and headed south down the Santa Ana Freeway to Scotsman’s Cove, a beach between Corona del Mar and Laguna Beach.

Along the way the car stalled on the freeway near the Sand Canyon off-ramp. Montag said:

“We tried to get the car started by crossing the wires on the solenoid, and like the car just wouldn’t kick. Then a Highway Patrol car pulled up behind us.”

“Everyone inside the car was popping…reds (Seconal) like mad. So the police rousted us and they found some reds in the car, but like they couldn’t prove whose they were so they cut us loose. Everyone went to the orange grove and crashed except me. I stayed in the car and the next morning I woke up…and hitchhiked back down to Garden Grove. Just as I was splitting I saw the tow truck move up to the back of the car.”

Police theorized that after Montag left a tow truck pushed the car onto Sand Canyon Ave where it was left abandoned on a side street.

About 3 p.m. Florence Brown, driving her Pontiac station wagon, came down the Sand Canyon off-ramp from the northbound Santa Ana Freeway. She was only 200 yards from her destination, a PTA meeting.

Her assailants forced their way into her car and made her drive a few miles west on Sand Canyon to an orange grove. It was there she was repeatedly stabbed by Steven Hurd.

“looked at me like I was a tramp, and she called me a bum.”

Following the slaying Steven Hurd, Christopher “Gypsy” Gibboney and Herman Taylor put Brown’s body into her station wagon,and then went back to pick up the rest of their gang of losers. The drifters then callously drove around with Brown’s body in the car.

“They drove around the rest of the day–even stopping at Santa Ana to drop off some personal items–with the body in the station wagon. “Then later that night, they drove the station wagon down south (south of Santa Ana) again to get rid of the body.”

Upon investigation police thought it likely that the mutilation of Brown’s body occurred at the Riverside county burial site, and that it was Hurd who had removed the parts for use in a Satanic ritual. Brown’s heart and lungs had been cut out and her right arm had been severed. In addition, three ribs had been removed from her back and strips of flesh had been cut from her upper right leg. The body parts were never found and the cops feared the unthinkable, cannibalism.

“There was something about the way in which the woman’s body had been mutilated which made us ask some unusual questions.”

After burying Mrs. Brown’s body in a shallow grave the group, which included a drugged out waitress, Mrs. Melanie C. Daniels, 31, reassembled and drove north.

Hurd wanted to see the man he called “the chief devil”. According to Hurd’s attorney Steven was not referring to the head of the Church of Satan, Anton LaVey.

For his part, LaVey was dismissive of many of the so-called devil worshipers of the time and referred to them as: “kooks and creeps who are out of their minds on drugs.”  Maybe LaVey wasn’t Hurd’s chief devil, but I can’t imagine Steven passing up an opportunity to see LaVey’s documentary film SATANIS, released in March 1970. 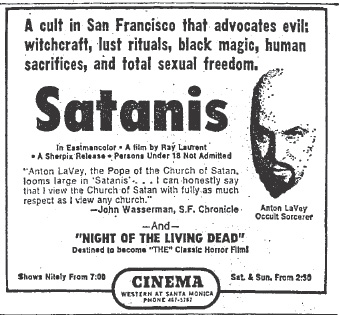 The drive up north was particularly bizarre. Hurd was on a mission to visit with the chief devil, whoever he was, and Melanie Daniels wanted to visit a boyfriend of hers who was doing time in San Quentin. Daniels actually got as far as the gate of the prison where guards turned her away.

The group drove Florence Brown’s car south again where they abandoned and then torched the station wagon in Los Gatos. The drifters split up there, each hitchhiking back to Orange County where they were arrested. 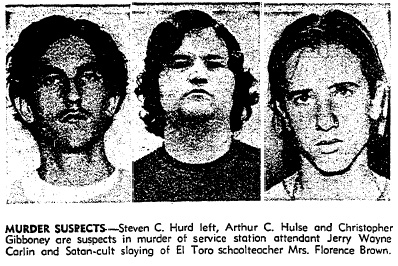 Because the band of drifters included three juveniles, Craig “Moose” Hulse (16), Herman Taylor (17), and Christopher “Gypsy” Gibboney, the Orange County D.A. had to decide if the young killers would be tried as adults. Another issue for the law was whether or not the criminals in the case were sane enough to stand trial.