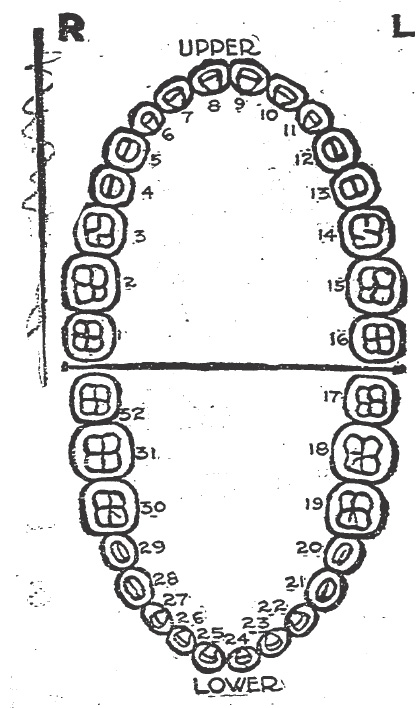 Captain Bright’s faith in his detectives and the crime lab wasn’t misplaced. Six weeks following the discovery of a woman’s torso in the Los Angeles River partial identification of the victim was made through her teeth. The dead woman was tentatively identified as Mrs. Laura B. Sutton. She was 40 years of age and had mysteriously disappeared at the end of March–six days before the torso was found. 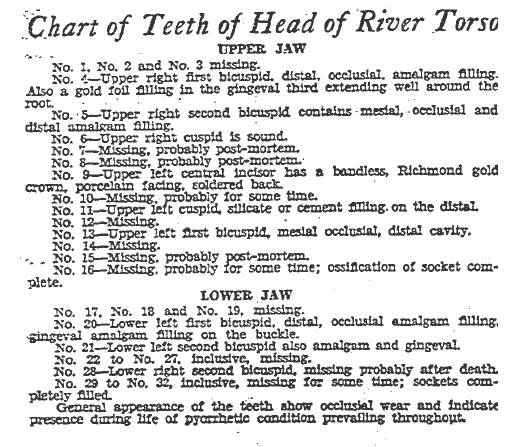 Mrs. Sutton’s brother, E.J. Groff, had seen the drawings of the teeth in the newspaper and immediately contacted his sister’s dentist. While the doctor wouldn’t go so far as to state positively that the teeth were Mrs. Sutton’s, he was willing to say that they closely resembled them–he would need to make a trip to the Coroner’s Office to make a positive match. Unfortunately, his trip to the see the skull would have to be delayed until he could find Sutton’s x-rays, which he had misplaced.

Groff told detectives that prior to her disappearance his sister had been behaving strangely. She seemed agitated and made a number of odd statements. She told him that she had left an unrecorded lot in his custody and then she said: “If anything ever should happen to me, that lot I deeded you is not recorded.”

She made no effort to explain herself further. Then she told him that two Liberty bonds had been stolen from a safety deposit box. Apparently whoever took them had slipped a sharp instrument into the envelope in which they were kept, removed the bonds, then resealed the envelope so carefully that nobody would have noticed if they’d merely glanced inside the box.

Groff provided the name of a man he felt could be responsible for the missing bonds, and for his missing sister. The detectives wouldn’t give out the man’s name until they’d had an opportunity to investigate further.

There were the usual false leads in the investigation; a hair sample taken from the skull and compared with hair found in Mrs. Sutton’s house seemed to indicate that the torso wasn’t hers. But then detectives interviewed Sutton’s hairdresser who told them that the missing woman had been attacked in mid-March, just a week or two before she went missing.  The hairdresser said Sutton had told her she didn’t recognize her attacker, but she could have been concealing his identity for reasons of her own. Perhaps the attack was the result of a failed love affair. 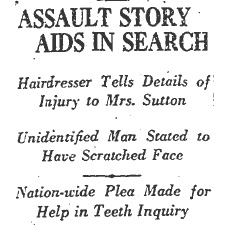 Until they could get confirmation from Sutton’s dentist, Sheriff’s investigators continued to run down clues. They wanted to speak to Eugene Sutton, whom Laura had divorced in 1928. As an ex-spouse, behind in his alimony  payments, Eugene was a person of interest.

While the detectives followed various leads the Coroner’s office reported that a minute examination of the knife marks on the toro where the head and limbs had been severed had produced results.  The body had been dismembered by someone familiar with human anatomy and a surgical knife had probably been the tool used. An examination of the flesh suggested to the coroner than the murderer had a practical knowledge of surgery. The autopsy surgeon, Dr. Wagner, estimated that the killer would have needed about three hours in which to complete the gruesome task.

Dr. Frank William Westlake, retired physician and a former suitor of Mrs. Sutton’s, came forward to make a detailed statement to Captain Bright.  Westlake said that he saw Laura on March 28th when she came to him saying that she planned to travel to Ventura for a few days to see her ex-husband about the unpaid alimony. According to Westlake, Laura had left two pet birds in his care.

Laura’s sister, Mrs. Ida Kleppe, was questioned by Sheriff’s detectives but she couldn’t offer much help. She said that she and her sister had been estranged for several years.

Round-the-clock efforts to either find Laura Sutton, or conclusively identify the torso as hers, consumed both detectives and scientists. Captain Bright got another visit from Dr. Westlake who brought with him several notes signed with the initials L.B.S., which he said were from Sutton.  The notes were a mixed bag. Some of them were in envelopes and others had been stuffed into Westlake’s mailbox. Some had been typed, others handwritten, and each of them made reference to the pet canaries in Westlake’s care. 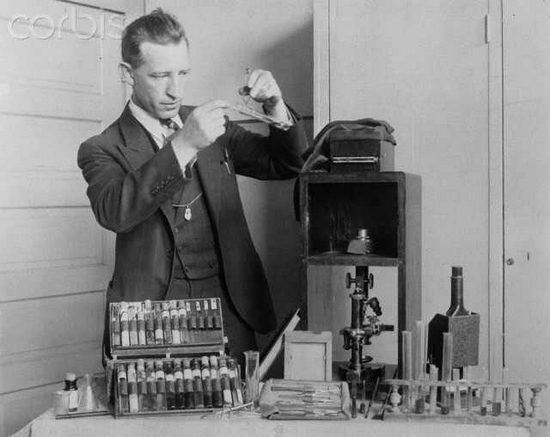 The notes could provide useful information, but first they would have to be examined by handwriting experts to determine their authenticity.

If Laura Sutton had written the notes then why hadn’t she come forward? The woman had been missing for nearly three months. Neither her friends, nor her family, could offer any explanation for such peculiar behavior.

While detectives were following leads and the scientists were examining physical evidence, deputies where searching the river bottom from Vernon to Compton for the still missing limbs. They were  also preparing to rip out the plumbing in Laura’s house to see if there was any physical evidence of a murder and dismemberment lodged in the pipes. 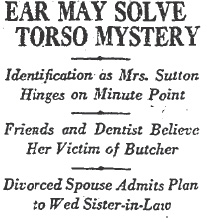 The scientists had found another interesting avenue of inquiry–the ears of the deceased. According to those who knew her Laura’s ears had been pierced for earrings, but the ears on the head were intact.

The case became further complicated when Laura’s attorney, Willard Andrews, perhaps the last person to see her alive, came forward with a statement that was mind-boggling.  Laura told him she intended to find her ex-husband and her sister, Mrs. Kleppe, and “have it out with them.” Why?  Because her sister and her ex were having an affair–in fact it was the reason for the divorce. No wonder Laura and her sister were estranged. Even worse, her sister and her ex-husband planned to marry. Talk about awkward family gatherings.

From virtually nothing to go on Sheriff’s investigators suddenly had suspects and physical evidence galore, all they had to do was to make sense out of it.

On May 28th an x-ray of the victim’s ears showed that they had been pierced but that they’d healed over so that the holes weren’t visible to the naked eye. The x-ray evidence was a step in the right direction–then the dentist, E.C. Hyde, positively identified the teeth in the skull as Laura Sutton’s.

With the victim ID’d Captain Bright still had to deal with a growing list of potential suspects. Just like in the movies Captain Bright summoned everyone connected to the case to the homicide squad’s office for questioning. The L.A. Times listed the people who had been rounded up:

“Eugene Sutton, divorced husband of Mrs. Sutton; Ben King, sweetheart of and roomer at the home of Mrs. Sutton when she disappeared; Dr. Frank Westlake, asserted sweetheart of Mrs. Sutton, said to have freqauently aided the woman in financial transactions involving real estate; Mrs. Ida Kleppe, sister of Mrs. Sutton who assert to Captain Bright that she and her sister had not been friendly for years, and Emerson De Groff, brother of the missing woman.”

By May 30th Captain Bright and his detectives had finally narrowed their list down to a single suspect. Who?  Wait and see.

NEXT TIME: A suspect is named.