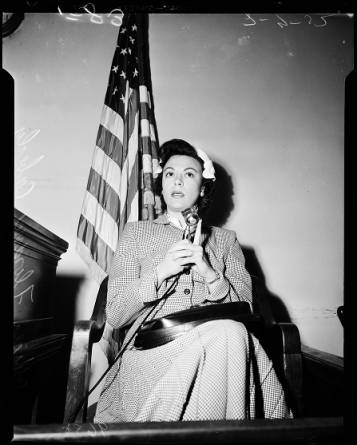 In 1952 LAPD Policewoman Florence Coberly appeared to be a woman with a bright future in law enforcement. She had been instrumental in taking down career criminal and ex-con, Joe Parra. Parra had a history of sexual assault and he was shot and killed during an undercover assignment in which Florence had acted as a decoy. She had stayed tough during the inquest following Parra’s shooting when his brother Ysmael began shouting and then attempted to lunge at photographers. She had appeared on television and had been honored at various awards banquets all over town.

But (you knew that was coming, didn’t you) Florence’s personal life began to unwrap slightly when after only three years of marriage she divorced her husband Frank in 1955. We’ve heard countless times over the years how tough it is to be a cop’s wife, but I imagine being the husband of a cop is not much easier–the unpredictable hours and the danger could be enough to send any spouse out the door forever. But then we don’t really know what caused the Coberly’s marriage to dissolve. The divorce notice appeared in the June 29, 1955 edition of the L.A. Times, but it was legal information only and gave no hint of the personal issues which may have caused the Coberly’s to break up. Even if her marriage hadn’t made until “death us do part” at least Florence had her job. 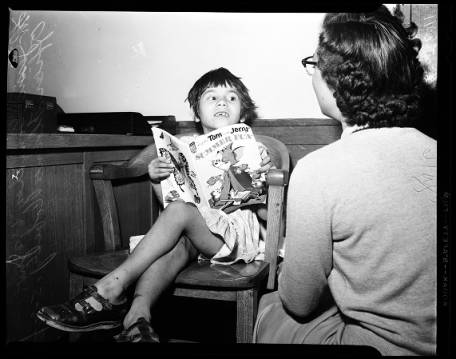 Florence with her back to the camera, befriends a lost girl c 1954 [Photo courtesy of USC Digital Archive]

There is no further record of her in the Times for several years following the fatal shooting of serial rapist Joe Parra in 1952, so we’ll have to presume that her career in law enforcement was on track. Then nearly six years after the Parra case, on July 2, 1958, the Times ran a piece under the headline: “Policewoman’s Mother Convicted in Shoplifting”; it was buried in the back pages of the “B” section and it told an interesting tale.

Mrs. Gertrude Klearman, the fifty-three year old mother of a policewoman, had been found guilty of shoplifting by a jury of eleven women and one man. The jury had spent only one hour and seven minutes in deliberation. As embarrassing as it would have been to have your mom convicted of shoplifting, it would have been so much worse if you were a cop–and orders of magnitude more humiliating if you were a cop busted WITH your mother for stuffing $2.22 worth of groceries into a handbag and walking out without making the necessary stop at the check-out stand.

According to Police Officer George Sellinger, an off-duty cop supplementing his income by working as a store detective, the pair of women, one of whom you have undoubtedly guessed was Florence Coberly, had been accused of stealing two packages of knockwurst, a can of coffee, a package of wieners and an avocado.

Florence had remarried and not surprisingly she had married another cop, Sgt. Dave Stanton. But despite a change in her surname there was no mistake that the woman accused of shoplifting was none other than the former Florence Coberly, Policewoman of the Year. 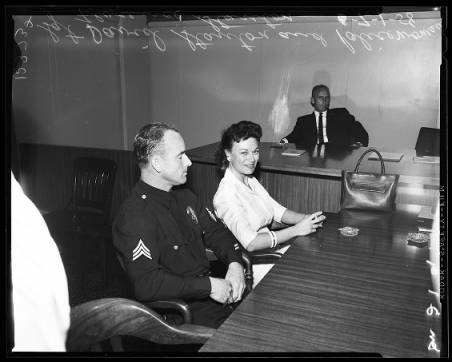 Gertrude was found guilty, but Florence had been freed of the shoplifting charge during trial on a technicality involving unreasonable search and seizure.

At the misdemeanor trial her attorney, Frank Rothman, vigorously questioned Sellinger on the stand and finally got him to admit that he had not actually seen Florence stuff the food items into her purse. He had pressured her to submit to a search outside the grocery store based on the scant evidence of having seen her holding some packages in her hand. As far as Rothman and the law were concerned Sellinger’s reason for the search was seriously flawed and a legal no-no.

LAPD in the late 1950s was still understandably touchy about any hint of scandal or misbehavior by its officers. During the decades prior to William H. Parker’s ascension to Chief, the institution had watched as many of its members were accused (some even convicted) of all manner of graft and corruption.

While a package of knockwurst hardly rises to the standard of bad behavior that had plagued LAPD earlier, just being arrested was enough to get Florence suspended from duty pending a Police Board of Rights hearing.

It couldn’t have been easy for Florence to sit on the sidelines and await the decision that would have such an enormous impact on her future. Law enforcement wasn’t just a 9-5 job for her, it was a career and one for which she had displayed an aptitude.

While Florence waited on tenterhooks for the Board of Rights hearing, her mother was sentenced to either forty days in jail or a $200 fine (she paid the fine).

Florence’s hearing began on July 22, 1958 before a board composed of Thad Brown, chief of detectives, and Capts. John Smyre and Chester Welch. Officer Sellinger repeated the testimony he had given at the trial and despite the fact that the shoplifting charges against Florence had been dismissed in a court of law, the board found her guilty of the same charge and ordered her dismissed from LAPD. 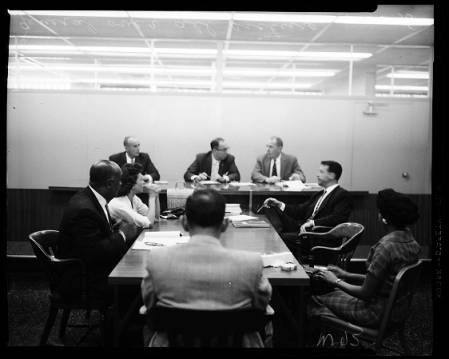 This photo may have been misidentified in the USC Digital Archive as Florence’s misdemeanor trial. I believe it to be the Police Board hearing.

It was an ignominious end to a career that had shown such early promise, and I can’t help but wonder if there was more to Florence’s dismissal from the police force than the shoplifting charge.

In February 1959, Florence filed suit in superior court seeking to be reinstated. Her complaint was directed against Chief Parker and the Board of Rights Commission. Florence stated that she had been dismissed from the LAPD on a charge that she had, with her mother, shoplifted groceries from a San Fernando Valley market. Florence denied her guilt and contended that the only evidence in the case may have been applicable to her mother alone. 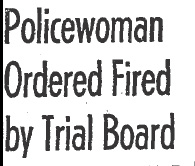 It took several months, but in July 1959 Superior Court Judge Ellsworth Meyer sided with the LAPD and refused to compel Chief Parker to reinstate Florence.

I haven’t discovered any further mentions of Florence in the newspaper. I’m curious to know how her life played out and what became of her in later years. As it is with so many of the tales covered here in Deranged L.A. Crimes there is no satisfactory conclusion. Of course I can always hope that a member of her family will see the story and contact me.  It has happened before.

Meanwhile, I salute Florence for her no-holds-barred, kick-ass entry into policing in 1952; and I would be remiss if I didn’t mention one last time that fantastic bandolier that dangled so daintily from her belt–as I said before lady cops knew how to accessorize.

NOTE: Many thanks to my friend and frequent partner in historic crime, Mike Fratantoni. He knows the BEST stories.