On Thursday, August 2, 1928, a pair of Boy Scouts were hiking in the area of Stone Canyon above Mulholland Drive. They were curious about the buzzards circling in the sky above them. The scouts didn’t need to possess special wildlife badges to know that buzzards are generally the bearers of bad news for some unfortunate creature, so they took their concerns to Howard Rygaard, a Ranger at City Fire Patrol Station #1.  Upon investigation Rygaard found the nude, badly decomposed and partially dismembered body of a woman. The ranger phoned the police.

The condition of the woman’s body made an immediate identification impossible–she had been ripped apart by coyotes. Detectives found a couple of small clues at the scene: a broken strand of beads, a wedding ring, and shell casings from a .38 caliber revolver.

The detectives began their investigation with the wedding ring in which there was a number  that led them to a pawn shop on South Main Street. The ring had been had been pawned by a woman who identified herself as Mrs. Barber of 841 Golden Avenue. Then they located a missing persons report dated July 23, 1928 in which they found an interesting anonymous tip involving a man named Barber. The tipster said that Barber and his pregnant wife had been seen leaving together in a rented car, apparently to go for a Sunday drive, but when Mr. Barber had returned hours later he was alone.

Buried in the police report was the tipster’s name, Mrs. Gertrude Riebling of 1215 North Avenue 54 in Highland Park. Mrs. Riebling didn’t  know the Barbers–she’d heard the story from a friend of hers who was a neighbor of the missing woman and decided to contact the law.

LAPD Detective Lieutenants Condaffer, Sanderson and Stevens traced Mr. Barber to an engineering firm on Mateo Street where they took him into custody for questioning. He had been employed at the firm for only a few months and not under the name Barber–his co-workers knew him as Russell Burnholme.

During questioning Russell revealed that his surname wasn’t Barber and it wasn’t Burnholme either–he was actually Russell St. Clair Beitzel, a YMCA leader and college graduate from Philadelphia. The police followed up their chat with Russell with a few very enlightening telephone calls to the City of Brotherly Love. 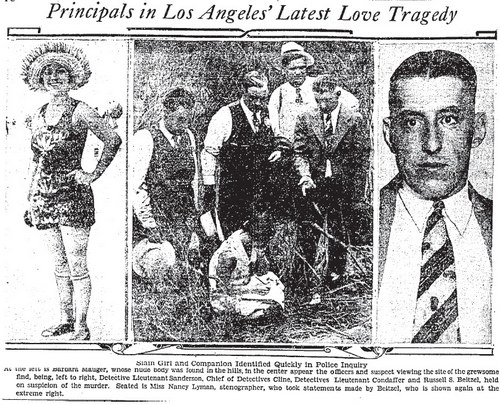 Barbara Burnholme was actually Barbara Mauger, a nineteen  year old waitress whom Russell had met while the two were working at Blauner’s Department Store in Philadelphia. Oh, and there was a Mrs. Beitzel but it wasn’t Barabara. Cops spoke with Jean Mellinger Beitzel, Russell’s legal wife and the mother of his four and five year old sons. Jean said that Russell had deserted her about a year earlier for the Mauger girl, and he’d stolen $300 from the department store’s safe to finance his new life. Jean intimated that marriage and fatherhood had weighed heavy on Russell and that was why he’d fled.

When the cops confronted him with a deserted wife, two kids and a $300 theft, Russell ‘fessed up. But he steadfastly maintained his innocence in Barbara Mauger’s death and kept repeating: “I did not kill her.”  His protestations of innocence were becoming harder for the police to believe because they were turning up a compelling amount of circumstantial evidence in Barbara’s murder, and all  of it pointed directly to Russell. 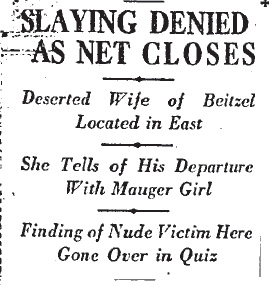 The cops undoubtedly hoped to wrench a confession from Russell when they drove him out to the scene of Barbara’s death (at least they believed it was Barbara, the badly decomposed and mutilated body had not yet been positively ID’d), but according to a newspaper account the suspect was “calm, indifferent and even at times laughing, despite the stench and grewsomeness (sic)”.

In another effort to shake-up the suspect, the cops drove him to the undertaker’s parlor in Van Nuys where the mutilated remains were being held. Russell looked down at the corpse and said: “It looks as though it may have been her.”

NEXT TIME: Science leads to an identification of the dead body on Mulholland Drive as the case against Russell Beitzel continues to build.