Investigators were back to square one.

Square one in this case was to conduct a thorough search of police department records for recently paroled “hot prowl” burglars living in the area. Hot prowl burglars are the creepazoids who enter a home while it is occupied. The risk is increased for the perpetrator, and that may be the point of it. Sneaking around in a home while the inhabitants watch TV, listen to the radio or, even more terrifying, as they sleep, is a major rush for some of the more twisted souls who walk the planet.

The records search turned up the names of three possible suspects; although only one of them, a 37-year-old ex-con named Clifford Russell Pridemore, was arrested. LAPD picked him up near 7th and San Julian Streets downtown–the heart of Skid Row. According to detectives, Pridemore was well-dressed when they busted him–a fact which they found to be very suspicious given he had no visible means of support.

Pridemore had been released from Folsom in July 1954 after serving a term for burglary. His modus operandi as a burglar was eerily similar to the circumstances in Karil’s murder case. And the fact that Pridemore had a history of assaulting women made him a solid suspect.

Curiously, three nurses who lived a few doors down from Karil had slept through the hot prowl burglary of their apartment on the same morning that Karil died. Their empty handbags were found on the porch outside their door. It seemed likely that the person who killed Karil had creepy-crawled through the nurses’ apartment too. Was that man Clifford Pridemore?

While detectives continued to sift through the few available leads, Karil’s brother-in-law, H.L. Manley, made arrangements to clear out the dead woman’s apartment.  One of Karil’s prized possessions was an original water color painting by Raoul Dufy. The painting was valued at about $1800 (over $16,000 in 2016 dollars). Manley told reporters that the painting, along with Karil’s other belongings, were headed for storage “at least until we can decide what to do with them.”

Karil’s body was released by the Coroner on February 23rd and taken to the Heath Funeral Home in National City for a funeral in San Diego–which is where her mother lived.

Police leaned hard on Pridemore but he never wavered in his assertion that he had nothing to do with Karil’s slaying. LAPD assigned another team of detectives to work with Jack McCreadie and Charles Detrich–Howard Hudson and Harry Hansen. Hansen was one of the principal detectives in the 1947 mutilation murder of Elizabeth Short, the Black Dahlia. (The case was unsolved in 1955 and remains so to this day.)

A possible witness, unnamed by the cops for fear of reprisal by the killer, came forward. The witness had observed a man loitering in the immediate vicinity of Karil’s apartment at least twice. Once on the night she was killed.

A couple of weeks following Karil Graham’s murder police announced they were investigating the slugging of Emily Jones, 26, a local dance hall hostess. Jones had awakened in her apartment at 474 South Hartford Avenue as a prowler attempted to assault her. He beat her with a bottle and his fists, then he fled through a window. Evidently Jones’ assailant had entered the apartment after removing the screen from an unlocked window.

For reasons that they didn’t make public, LAPD detectives were convinced that Jones’ attacker was not the same perpetrator who had bashed Karil’s head in.

Karil’s inquest was held on March 8, 1955 and it took the jury only 10 minutes to decide that she had been murdered “by unknown person(s).”

However, the killer was not Clifford Pridemore–police were able to clear him. 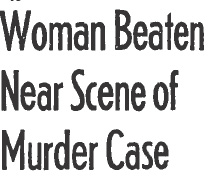 In May 1955 a woman was brutally beaten near the scene of Karil’s slaying. The victim, Nadia Copmpaneitz, a social science student on a visa from France, was attacked by an intruder who ripped the screen from a window in her apartment at 143 North Reno Street.
Nadia told police that she awakened at 4 am–certain that she was not alone in her room. Suddenly gloved hands tightened around her throat. She was able to roll away from the man. Enraged, the intruder beat her and left her with wounds to her scalp and eye. Nadia was fortunate. She lived.

The leads in Kari’s murder dried up and the case went cold.

NEXT TIME:  A knife attack, another murder, and a suspect in Karil Graham’s murder. 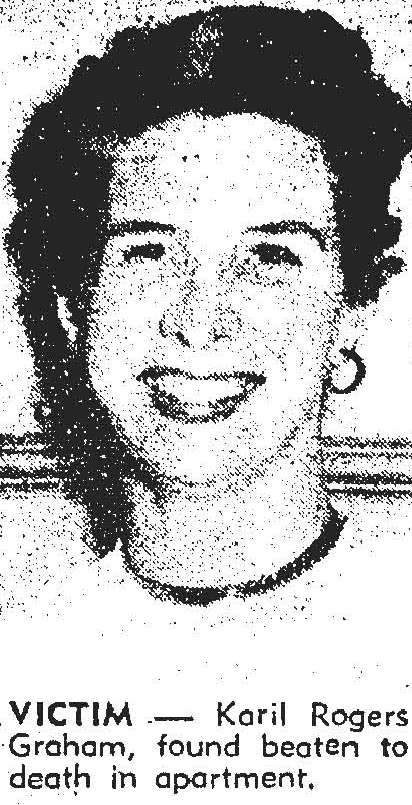 Karil Graham, an attractive divorcee in her late 30s, had always wanted to be an artist. She studied fine art in New York, but eventually she realized that she didn’t possess the natural talent to have a successful career. Unwilling to completely give up on her dream, Karil found a great way to be involved in what she loved most–she became the registrar at Art Center School, 5353 West 3rd Street. She spent much of her working day counseling budding artists, and the rest of her time in the company of talented faculty members. Karil had a warm smile that lit up her face. She was so well liked by the students that she was thought of as their “mother confessor”.

On Friday, February 18, 1955, Karil prepared dinner in her poolside apartment at 271 South Carondolet Street for two men she knew from school. One of them, Phil Hays, was a student, and the other man, Jack Potter, was an instructor. The dinner was in celebration of a painting, “Bird of Paradise”–a gift to Karil from Phil. After dinner Phil and Karil went for a swim in the heated pool behind her building, while Jack relaxed on the patio. The two men left after midnight. 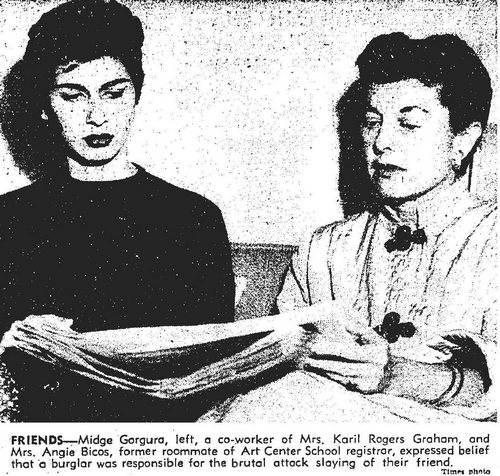 Karil had a midnight snack and then prepared to go to bed. She removed her makeup, slipped into her nightgown and put her hair up in curlers. Then she turned on the electric blanket and got into bed.

About 5 am Anita Loeber, who lived in the apartment above Karil’s, heard what she thought was a muffled scream. She had just moved into the apartment and was still getting accustomed to the unfamiliar sounds and habits of her neighbors. She didn’t hear any other noises and, because her phone hadn’t been installed yet, she couldn’t call the police. Anita went back to sleep.

At 2 pm on Saturday, February 19th, Eleanor Lipson, Karil’s landlady, walked past Karil’s apartment and noticed that the door was open. When Eleanor looked closer she saw a bare leg: “I didn’t think it was Karil because she wouldn’t be lying nude with the door open.” Eleanor didn’t investigate further until 6:30 pm. Whose naked leg did she think it was? And why did she believe it was unnecessary to investigate further until over four hours later? In truth it wouldn’t have altered the outcome. When Eleanor and her husband entered Karil’s small studio apartment and found their tenant dead. Karil’s face was covered with her own nightgown, a blanket, and a bedspread. There was blood spatter on the walls of the ransacked apartment, and Karil’s bed was soaked with blood. 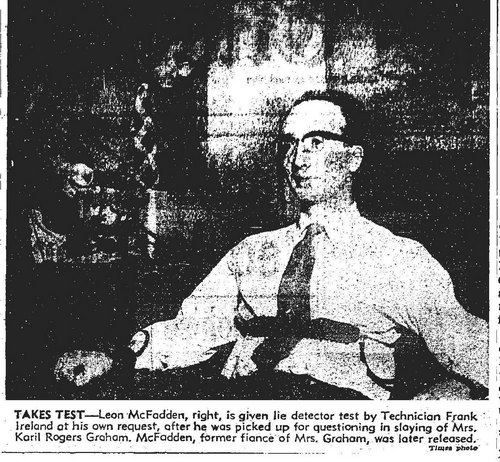 Los Angeles Police Department homicide detectives, Jack McCreadie and Charles Detrich, arrived and tried to make sense of the scene. Karil had sustained at least two devastating wounds to her head, but no weapon was found. During their examination of the crime scene they discovered a bloody fingerprint on the inside of the front doorknob. The knob was removed and sent to the crime lab, along with human hair found under one of Karil’s fingernails.

The detectives thought it was possible that Karil was killed during a burglary. They also considered another scenario, that someone had killed her and then staged the scene to look like a burglary. 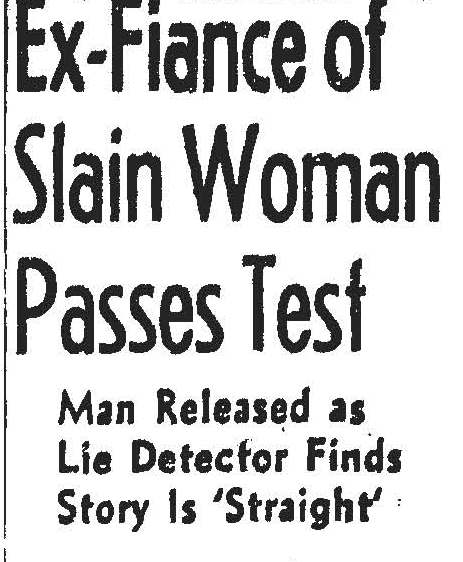 The first person of interest in the case was Karil’s former boyfriend, Leon McFadden. Leon was picked up by the LAPD for “routine questioning.” He told police that he hadn’t seen Karil in several months and that he had absolutely nothing to do with her murder. He was so adamant about his innocence that he demanded to be given a lie detector test “to clear me in this thing once and for all.” Police obliged.

Leon, who owned a greeting card shop at 166 1/2 N La Brea Avenue, was grilled for over three hours before detectives declared that his story was “straight” and released him.

If Leon hadn’t murdered the popular art school registrar, then who had?

NEXT TIME: Three suspects and a mystery witness surface in Karil Graham’s murder.